How should customers take their Alka-Seltzer? The findings of 2-3 B.

Presentation on theme: "How should customers take their Alka-Seltzer? The findings of 2-3 B."— Presentation transcript:

1 How should customers take their Alka-Seltzer? The findings of 2-3 B

4 What happens in an Alka- Seltzer reaction? Effervescence: Citric acid and baking soda in the tablet go through a chemical reaction The final product is water, carbon dioxide, and sodium citrate The sodium citrate is dissolved in the water That’s the gas we see being emitted from the tablet.

5 Stirred vs. Not stirred (Group 1) Hypothesis: We believed that the Alka-Seltzer tablet would dissolve quicker as it was stirred faster

7 Graphical Analysis The graph shows that as the stirring speed increased, the time to dissolve decreased.

8 Analysis The data collected does accurately support the hypothesis in that the time to dissolve decreased as it was stirred faster. Experimental Difficulties measuring exactly 50 mL of water cutting exactly half a tablet perfectly accurate timing Future Improvements more accurate stopwatch set of tablets equal to half a normal tablet the same person timing and watching the tablet dissolve

9 Temperature of tablet (Group 2) Hypothesis: The warmer the tablet, the quicker it will dissolve in the 50mL of water.

11 Graphical Analysis The tablet with a greater temperature dissolves faster because the particles in the tablet are moving faster, causing a quicker reaction when coming in contact with water.

12 Analysis Overall, our hypothesis was correct that the greater the temperature of the tablet, the quicker the tablet would dissolve after coming in contact with the water. Experimental Errors Amount of Water Tablet not cut exactly in half Don't know exactly when tablet is fully dissolved Ways to Improve Use full tablet as constant to all are exact same size

13 Type of Liquid (Group 3) Hypothesis: The Alka-Seltzer tablet will dissolve faster in other liquids than in distilled water, especially in a carbonated drink.

15 Graphical Analysis The graph shows the time for the tablet to dissolve in different liquids.

16 Analysis The data that we collected with this experiment did not support our hypothesis that the controlled type of liquid would dissolve the tablet the slowest. Experimental Errors Timing exactly Correct measurements of liquids and tablets Warming the soda took away the carbonation Future Improvements Whole tablets, no error on cutting More accurate timer The liquids all at room temperature before experiment started

17 Volume of water (Group 4) Hypothesis: We believe that as the amount of water increases, the Alka- Seltzer tablets will dissolve quicker.

19 Graphical Analysis The graph shows the relationship between the amount of water and average dissolving time.

20 Analysis The results we found roughly supported our hypothesis that as we got more water, the tablets would dissolve quicker. But really, the difference in average dissolving time was ten seconds at the most -- so there wasn't any significant changes to dissolving time as we changed the amount of water. Experimental Errors When we ended timing ("when the tablet was fully dissolved") had a lot of room for judgment and human error. Our measurements of the amount of water for our tests could be slightly off. We might of not cut the tablets perfectly in half therefore changing a variable (size of tablet) Room for Improvement We could have measured all other variables so we were sure they met control conditions. (i.e. temperature of water, size of tablet) We could have been more accurate timers.

21 Surface Area of tablet (Group 5) Hypothesis - We predict that the Alka-Seltzer tablet will dissolve faster when crushed into a powered form and then pouring the distilled water.

24 Analysis The data we collected does support our hypothesis which was that putting the crushed tablet first and then pouring the water would decrease the time it took to dissolve the tablet. Experimental Error Accuracy of measuring 50 ML into a beaker Cutting a tablet into halves, quarters, and eights, and crushing the tablet Accurate timing Future Improvements More accurate stopwatch Using whole tablets Having the same person look watching the tablet dissolve

25 Temperature of Water (Group 6) The tested variable was the temperature of the water. We used the control temperature (19.3 ˚C), hot water (30.3 ˚C) and cold water (8.6 ˚C) Hypothesis: The Alka- Seltzer tablet would dissolve the fastest in the hottest water.

28 Analysis We found that the higher the temperature of water, the quicker the tablet dissolves in the water. This matches our hypothesis completely. There was only one major difficulty in our experiment. It was very difficult to get the water to be at the same temperature for two separate trials. Things we could change for future experiments include making our temperatures precise, and also experiment with a greater range of temperatures (i.e. 10 ° C, 20 ° C, Room Temperature, 30 ° C, etc.)

29 Conclusion Through the results of this experiment, we have found that the most efficient method to use Alka-Seltzer would be using the fastest results from all experiments, provided they are safe and practical. One should: Stir it fast (difference of 14.5 seconds)* Make it a powder before putting the tablet in (36.3 seconds) Put it in hot water (24 seconds) Put it in water** Put it in a large amount of liquid (13.5 seconds) *in comparison to control **water was the control

Download ppt "How should customers take their Alka-Seltzer? The findings of 2-3 B." 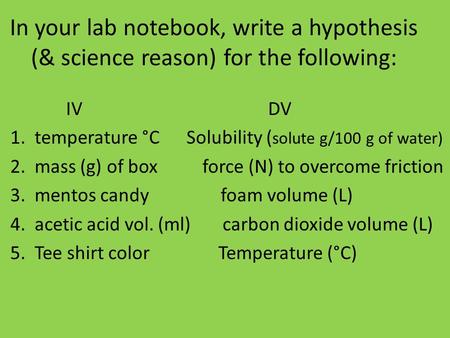 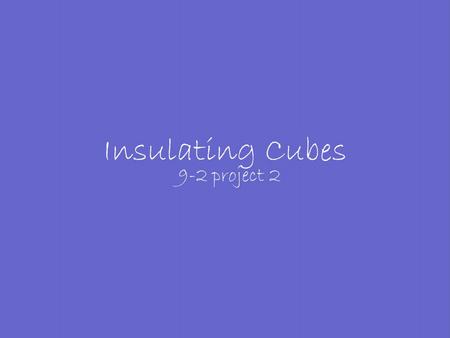 Insulating Cubes 9-2 project 2. Purpose The purpose of my experiment is to determine which insulating material will keep an ice cube frozen the longest. 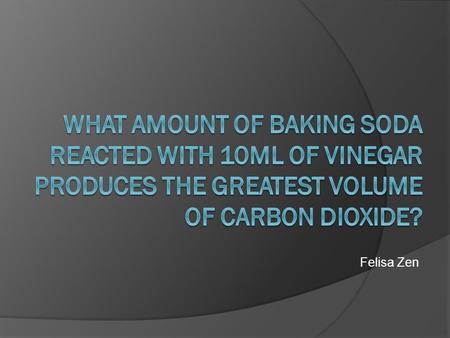 Felisa Zen. Aim  To find out what mass of baking soda reacted with 10mL of vinegar will produce the greatest volume of carbon dioxide in a 100mL eudiometer. 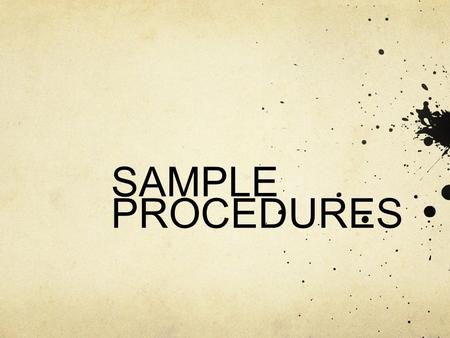 SAMPLE PROCEDURES. PROCEDURE Get a film canister and pour 15 mL of water into the canister. Cut an alka seltzer tablet in half and quickly drop into the. 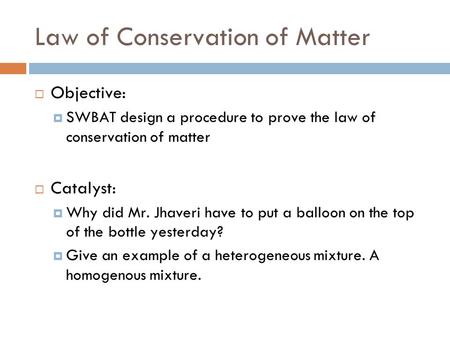 Law of Conservation of Matter 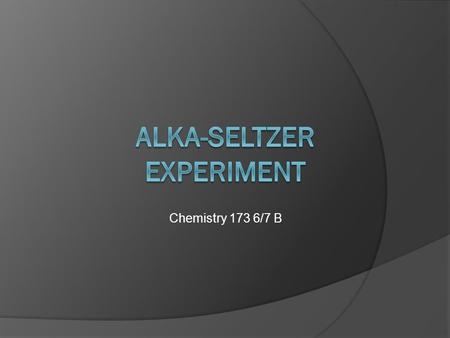 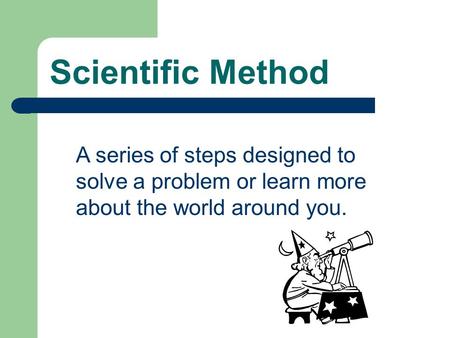 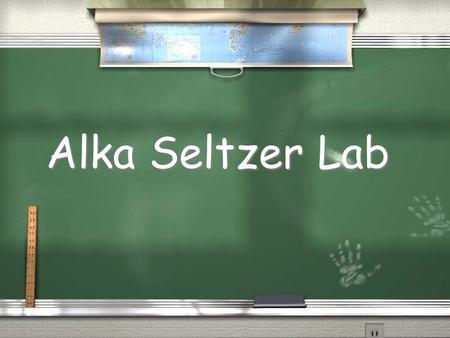 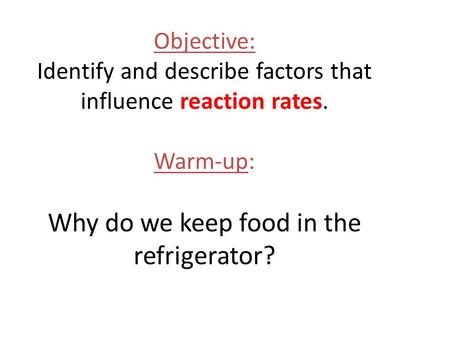 Objective: Identify and describe factors that influence reaction rates. Warm-up: Why do we keep food in the refrigerator? 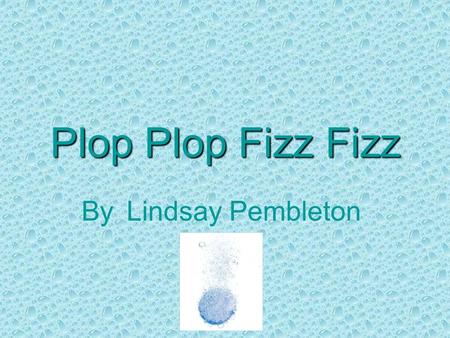 Plop Plop Fizz Fizz The purpose of this project was to study the effect of temperature on the rate of a chemical reaction. The experiment involved dropping. 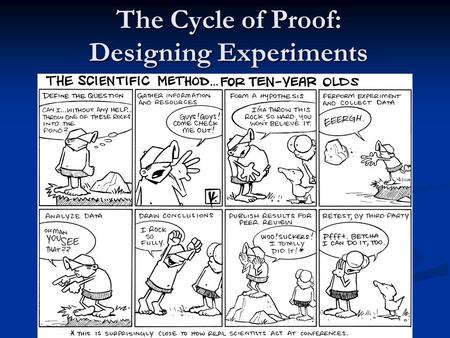 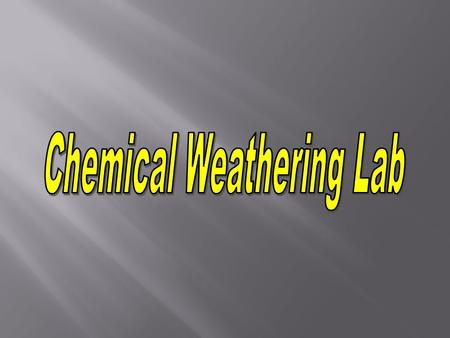 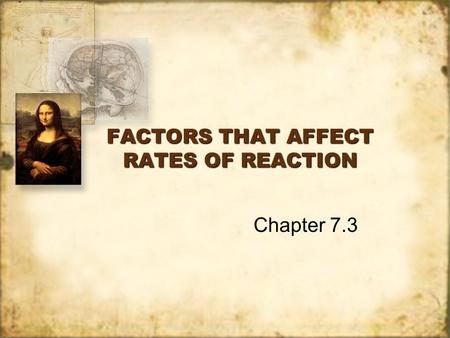 FACTORS THAT AFFECT RATES OF REACTION 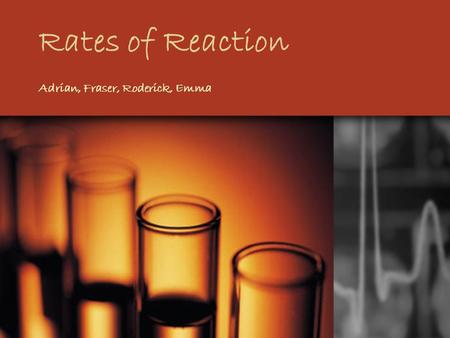 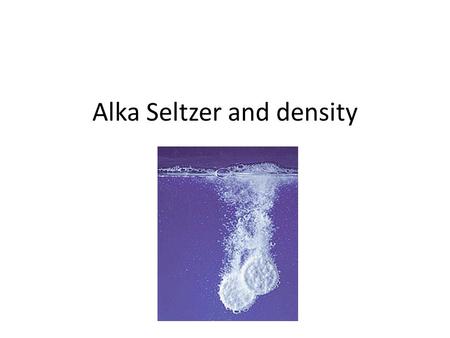 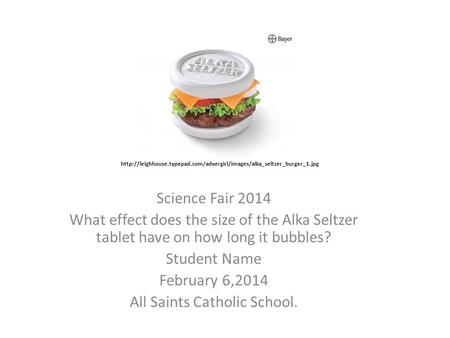 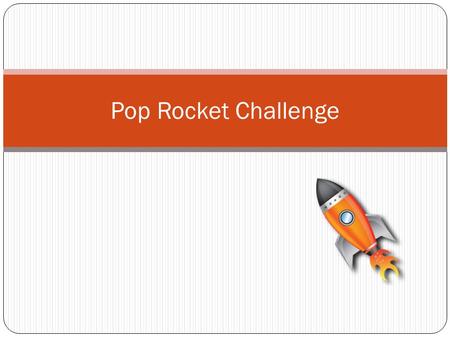 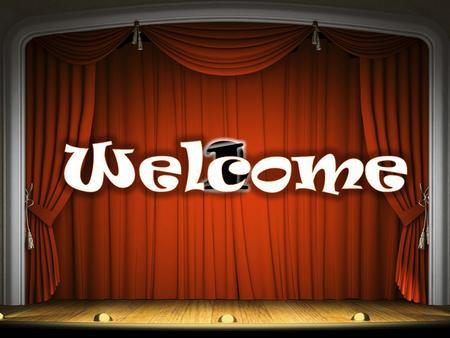 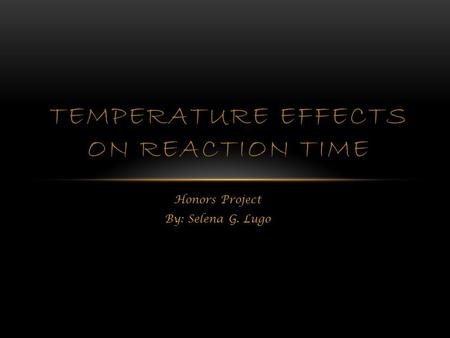 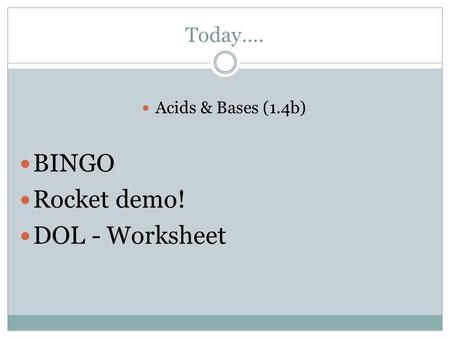