Presentation on theme: "Objectives Analyze the problems farmers faced and the groups they formed to address them. Assess the goals of the Populists, and explain why the Populist."— Presentation transcript:

1 Objectives Analyze the problems farmers faced and the groups they formed to address them. Assess the goals of the Populists, and explain why the Populist Party did not last.

2 Terms and People Oliver H. Kelley – a Minnesota farmer and businessman who organized the Grange Grange – an organization of farmers who joined to learn about new farming techniques, to call for the regulation of railroad and grain elevator rates, and to prompt the establishment of the ICC Populist Party – a political party formed in on a platform of silver coinage, government ownership of the railroads, and fighting the corrupt and unresponsive elite

4 What led to the rise of the Populist movement, and what effect did it have?
Millions of Americans moved west after the Civil War to pursue the American dream. A variety of factors made their lives extremely difficult, which led to the social and political revolt known as Populism—and created one of the largest third party movements in American history.

5 People moving to the West and South in the late 1800s knew that their lives would not be easy.
Problems facing the farmers of the West and South low prices for crops high transportation, equipment, and loan costs drought reduced influence in politics They did not anticipate many problems that made survival nearly impossible.

6 Frustrated by these problems, farmers began to organize.

7 Farmers created groups to address their problems.
These groups formed a network called the Granger movement. The Grange was formally organized by Oliver H. Kelley in 1867 and gained a million members. The Grange declined after the 1870s, but Farmers’ Alliances became important reform organizations that continued the Grange’s goals.

9 The debate over monetary policy was an important issue of the day.
Those who wanted to use silver—including the Populist Party—were on the other. Those who wanted a gold standard were on one side.

10 The Populists did well in 1892, electing three governors, five senators, and ten congressmen.
The Populist candidate for president received one million votes in that election. 10

11 An economic depression began in 1893 and labor unrest and violence broke out. The Populist Party grew. In 1896, a young lawyer named William Jennings Bryan spoke at the national Democratic convention. The speech, with its Populist message of “free silver,” moved Democrats to nominate Bryan. The Populist Party chose to give him their support.

13 McKinley won against Bryan in 1896 and in 1900.
Bryan’s emphasis on money reform wasn’t popular with urban workers.

14 The Populist Party was weakened by supporting William Jennings Bryan on the Democratic ticket.
It survived another decade, but its viability as an alternative to the two major parties was over. Many of the reforms sought by the Populists became a reality. The new campaigning style used by Bryan became the norm. 14

Download ppt "Objectives Analyze the problems farmers faced and the groups they formed to address them. Assess the goals of the Populists, and explain why the Populist." 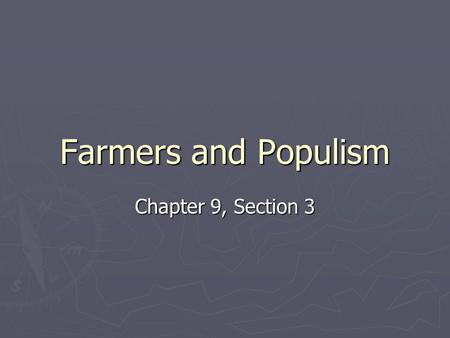 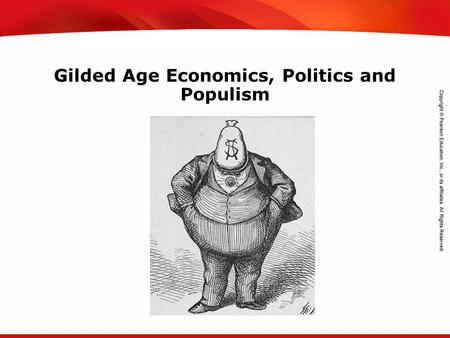 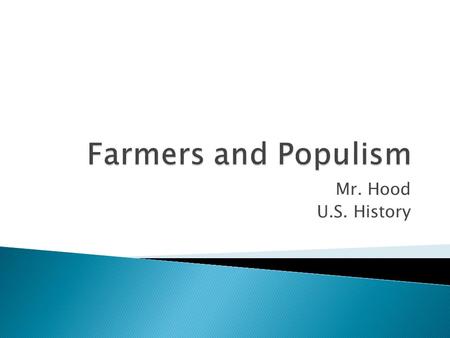