2 What is TP CASTT? An acronym of steps used to analyze poetry. The results of TPCASTT can be used to write an essay. The TPCASTT process is comprised of 7 steps which should be completed in the order given.

3 How does TPCASTT work? The TPCASTT method is used to analyze poetry for some reason specified by the analyst. The analyst will: Observe Interpret Infer Analyze Evaluate

4 Step 1: Title Goal- Attempt to predict what the poem will be about
Ponder the title before reading the poem. Questions to ask yourself: What predictions can I make about the poem What feelings can I connect to the poem’s title? Write your response in a complete sentence

5 Step 2: Paraphrase Goal- Translate the poem, line by line, into your own words.
Paraphrase the literary meaning/plot of the poem. A true understanding of the poem must evolve from comprehension or what’s going on in the poem.

6 Step 3: Connotation Goal- Contemplate the poem for meaning beyond the literal meaning.
In poetry, connotation indicates that analyst should examine any and all poetic devices, focusing on how such devices contribute to the meaning, the effect, or both of a poem. Consider imagery, figurative language, symbolism, diction, point of view, and sound devices You will link these considerations to the overall meaning.

7 Step 4: Attitude Goal- Observe both the speaker’s and the poet’s attitude
Having examined the poem’s devices and clues closely, now explore the multiple attitudes that may be present in the poem. Here you will describe the tone of the author and/or speaker. Recall how this is done… Pay particular attention to diction and how the author describes, feels, etc. the subject.

8 Step 5: Shifts Goal-Note shifts in the speaker’s attitudes or emotions.
Rarely does a poet begin and end the poetic experience in the same place. Discovery of a poet’s understanding of an experience is critical to the understanding of the poem. Trace the feelings of the speaker from the beginning to the end, paying particular attention to the conclusion

9 Look for the following to find shifts:
1. Key words (but, yet, however, although) 2. Punctuation (dashes, periods, colons, ellipsis) 3. Stanza division 4. Changes in line or stanza length or both 5. Irony (sometimes irony hides shifts) 6. Effect of structure on meaning 7. Changes in sound (rhyme) may indicate changes in meaning 8. Changes in diction (slang to formal language)

11 Step 7: Theme Goal- Determine what the author is saying and wants me to learn and feel after reading the poem. Identify the theme by recognizing the human experience, motivation, or condition suggested by the poem This step, within itself, has a system: Summarize the plot List the subject (s) of the poem (moving from literal subjects to abstract concepts such as war, death, discovery) Pay particular attention to the end of the poem. Messages are often revealed at this point. Determine what the poet is saying about each subject. Write a complete sentence, making a statement and point about the subject (s).

12 Janet Waking Beautifully Janet slept
Till it was deeply morning. She woke then And thought about her dainty-feathered hen, To see how it had kept. One kiss she gave her mother, Only a small one gave she to her daddy Who would have kissed each curl of his shining baby; No kiss at all for her brother. “Old Chucky, old Chucky!” she cried, Running across the world upon the grass To Chucky’s house, and listening. But alas, Her Chucky had died. It was a transmogrifying bee Came droning down on Chucky’s old bald head And sat and put the poison. It scarcely bled, But how exceedingly And purply did the knot Swell with the venom and communicate Its rigour! Now the poor comb stood up straight But Chucky did not. So there was Janet Kneeling on the wet grass, crying her brown hen (Translated far beyond the daughters of men) To rise and walk upon it. And weeping fast as she had breath Janet implored us, “Wake her from her sleep!” And would not be instructed in how deep Was the forgetful kingdom of death.

13 Example of theme explication using the poem “Janet Waking”
Plot: In “Janet Waking” Janet awakens one morning and runs to greet her pet chicken only to discover that a bee had stung and killed the bird. The discovery desolates Janet to such a degree that her father cannot comfort her. Subjects: 1. A child’s first experience of death 2. loss of a pet 3. innocence Themes: 1. Children become aware of the inevitability of death and are transformed by the knowledge. 2. The death of innocence is inevitable 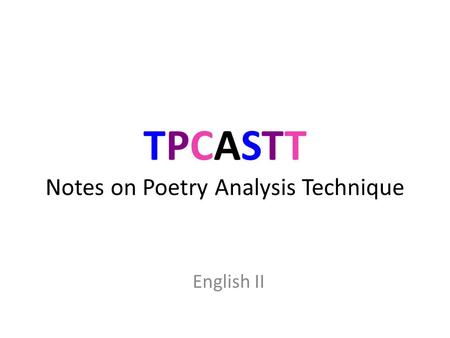 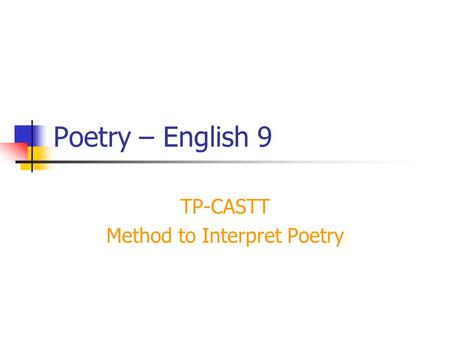 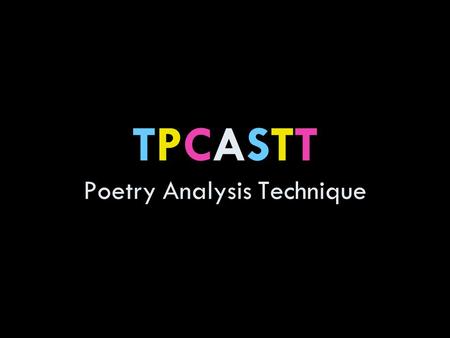 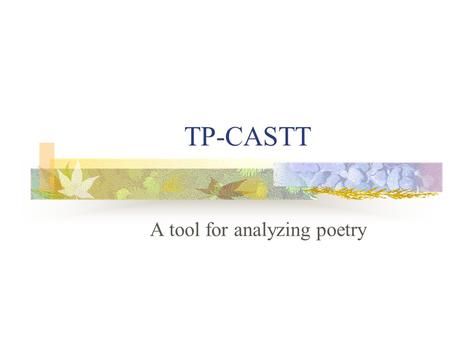 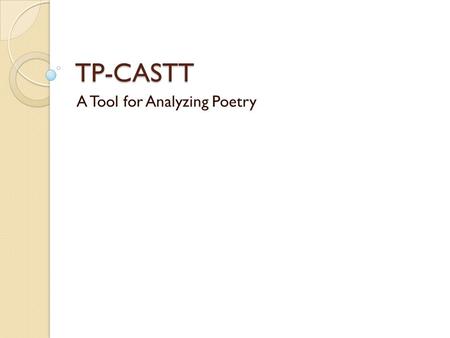 A Tool for Analyzing Poetry 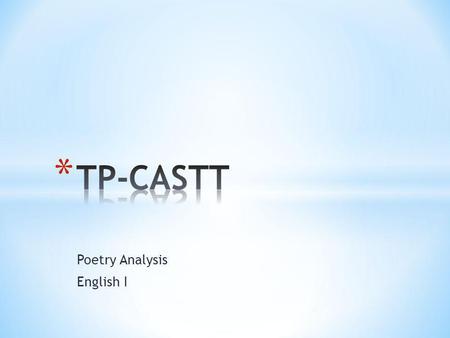 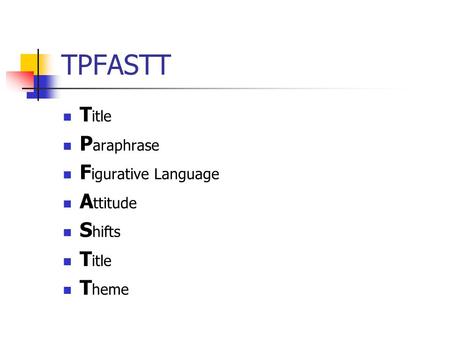 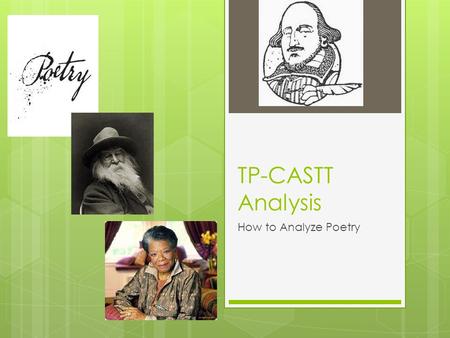 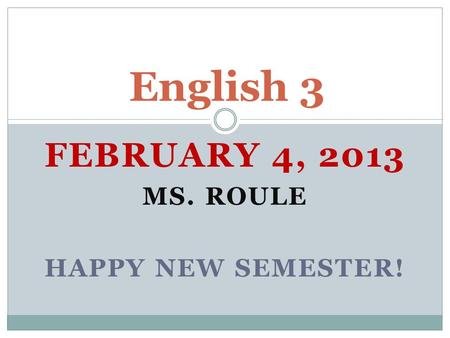 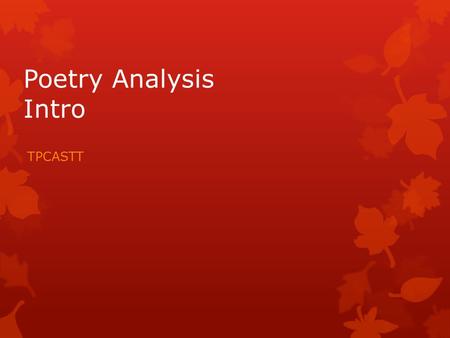 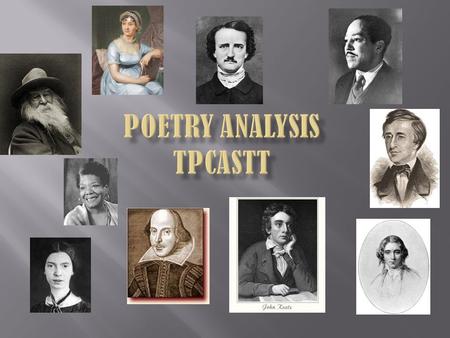 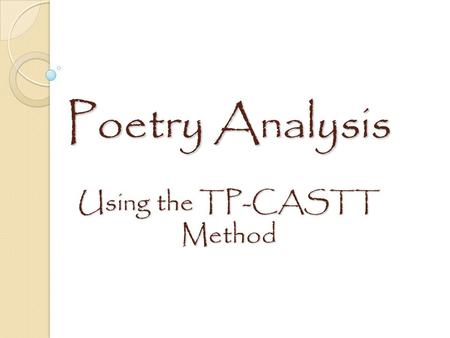 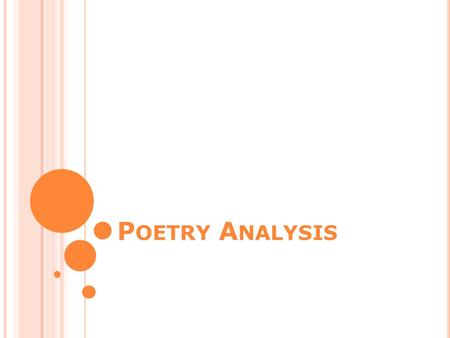 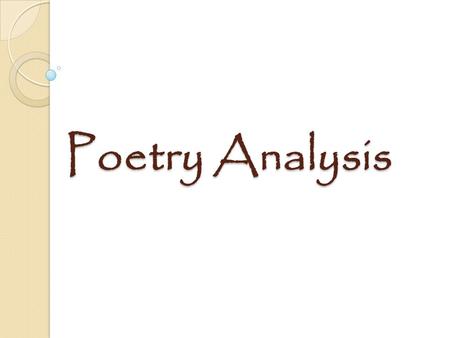 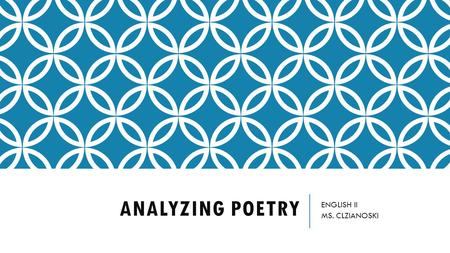 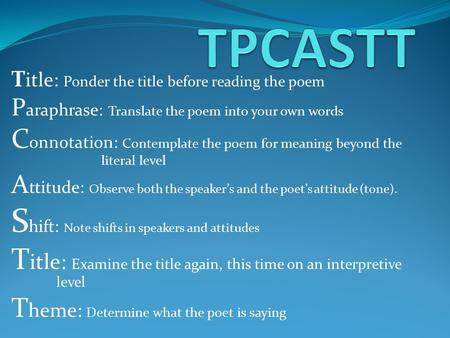 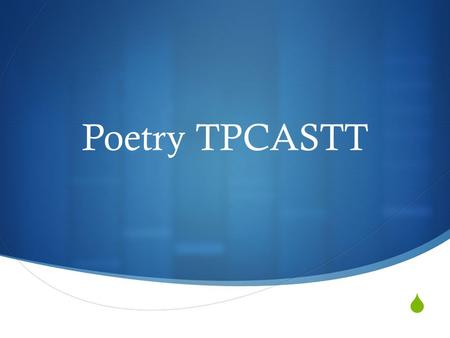 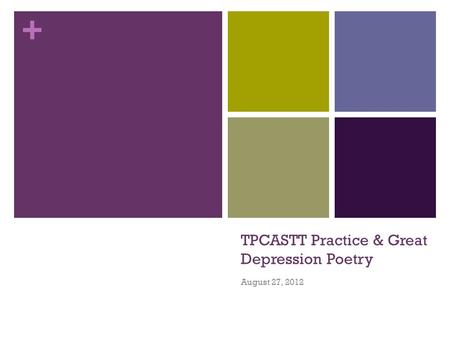 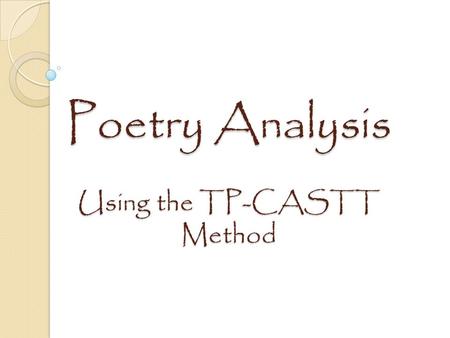 Poetry Analysis Using the TP-CASTT Method. What is TP CASTT? An acronym of steps used to analyze poetry. The results of TPCASTT can be used to write an.