4 What Is The Globalization of Markets?
Historically distinct and separate national markets are merging and creating the “global market” falling trade barriers make it easier to sell globally consumers’ tastes and preferences are converging on some global norm firms promote the trend by offering the same basic products worldwide

5 What Is The Globalization of Production?
Firms source goods and services from locations around the globe to capitalize on national differences in the cost and quality of factors of production like land, labor, energy, and capital Companies can lower their overall cost structure improve the quality or functionality of their product offering

7 What Is Driving Globalization?
Declining barriers to the free flow of goods, services, and capital average tariffs are now at just 4% more favorable environment for FDI global stock of FDI was $15.5 trillion in 2009 facilitates global production Technological change microprocessors and telecommunications the Internet and World Wide Web transportation technology LO 2: Recognize the main drivers of globalization.

10 How Has World Output And World Trade Changed?
The Changing Demographics of World GDP and Trade

11 How Has Foreign Direct Investment Changed?
In the 1960s, U.S. firms accounted for about two-thirds of worldwide FDI flows Today, the United States accounts for less than one-fifth of worldwide FDI flows Other developed countries have followed a similar pattern In contrast, the share of FDI accounted for by developing countries has risen Developing countries, especially China, have also become popular destinations for FDI

15 The Changing World Order
Many former Communist nations in Europe and Asia are now committed to democratic politics and free market economies creates new opportunities for international businesses but, there are signs of growing unrest and totalitarian tendencies in some countries China and Latin America are also moving toward greater free market reforms between 1983 and 2010, FDI in China increased from less than $2 billion to $100 billion annually but, China also has many new strong companies that could threaten Western firms

16 How Will The Global Economy Of The 21st Century Look?
The world is moving toward a more global economic system… But globalization is not inevitable there are signs of a retreat from liberal economic ideology in Russia Globalization brings risks the financial crisis that swept through South East Asia in the late 1990s the recent financial crisis that started in the U.S. in , and moved around the world

17 Is An Interdependent Global Economy A Good Thing?
Supporters believe that increased trade and cross-border investment mean lower prices for goods and services greater economic growth higher consumer income, and more jobs Critics worry that globalization will cause job losses environmental degradation the cultural imperialism of global media and MNEs Anti-globalization protesters now regularly show up at most major meetings of global institutions LO4: Explain the main arguments in the debate over the impact of globalization.

18 How Does The Global Marketplace Affect Managers?
Managing an international business differs from managing a domestic business because countries are different the range of problems confronted in an international business is wider and the problems more complex than those in a domestic business firms have to find ways to work within the limits imposed by government intervention in the international trade and investment system international transactions involve converting money into different currencies LO5: Understand how the process of globalization is creating opportunities and challenges for business managers. 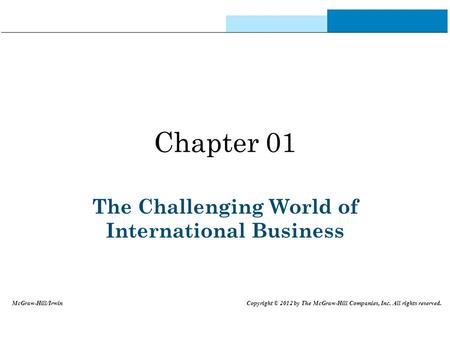 The Challenging World of International Business