2 Overview of Presentation
Introduction Methodology Anticipated Results & Problems References Introduction – Will state the goal of my project and give an introduction to DRASTIC Methodology – Will provide a more detailed look at DRASTIC. Will discuss: method development, give examples of it’s application, provide a detailed look at the method itself. Will also discuss the general process I plan to follow for carrying out the project, including constraints and limitations that I will have. Anticipated Results & Problems – will discuss what I hope to end up with, what problems I expect that I may encounter, and how my results can be improved upon. References – A list of sources, primarily from the examples, but the important one is the EPA method document.

4 Introduction My Project DRASTIC
DRASTIC Groundwater Vulnerability Map of Tennessee DRASTIC What is it? Identifies areas where groundwater is susceptible to pollution What are the applications? Guides land development & resource protection Flexible Used at a variety of scales Can be modified to include or exclude parameters The goal of my project is to produce a DRASTIC groundwater Vulnerability map of Tennessee. Internet research and conversation with TN Department of Env. Conservation (TDEC) has not revealed any instances where this has been done for TN. DRASTIC What is it? – Anyone who took GEOG 487 – Environmental Applications of GIS with Ken Corridini probably remembers DRASTIC. It is a method used to identify areas where the groundwater is more or less susceptible to impact from pollution. What are the applications? – Used to guide land development and resource protection. It can be used on a variety of scales, including sites (if they are large enough) such as the Savannah River Site in South Carolina, watersheds such as the Chippewa Creek watershed in OH, and states such as Pennsylvania. It can be modified to include or exclude parameters such as nitrates and pesticides as in the study conducted on the Snake River Basin, ID. It can also serve as the basis for new methods as in the Florida Aquifer Vulnerability Assessment

5 Example DRASTIC Map Here is an example of a DRASTIC Map. The lighter areas are more susceptible to contamination.

7 DRASTIC Overview DRASTIC – methodology guided by EPA
Developed by EPA & National Water Well Assoc. 600+ page guidance document Link to Guidance: xt Purpose – Over large areas, used to identify regions where groundwater is more or less susceptible to impact from pollution. The DRASTIC method was developed by the EPA and the National Water Well Association. According to the EPA DRASTIC guidance document (EPA, 1987), DRASTIC is a qualitative method that is intended to be used over large areas as a way to begin to understand which areas are more or less likely to be impacted by contamination from the surface migrating into aquifers.

8 DRASTIC Overview Cont. Overview of DRASTIC
Simplified GW vulnerability model Qualitative Produces a relative-risk scale Applicable over large areas Used as a screening tool Results guide land development & resource protection For small, specific sites, more detailed assessment needed Simplified model – DRASTIC is a relatively simple model compared to many other vulnerability models. Requires relatively fewer data inputs Qualitative – results are qualitative. Qualitative results produce a “relative-risk” scale Applicable to large areas Screening tool Results can guide general land development & resource protection decisions For small areas, more detailed assessment is needed. The DRASTIC method was developed by the EPA and the National Water Well Association as a way to produce a relative-risk scale of potential groundwater vulnerability to pollution that could be applied to a large area, while requiring relatively little data compared to other vulnerability models. According to the EPA DRASTIC guidance document (EPA, 1987), DRASTIC is a qualitative method that is intended to be used over large areas as a way to begin to understand which areas are more or less likely to be impacted by contamination from the surface migrating into aquifers. Due to the relative simplicity of DRASTIC compared to some other vulnerability assessment models, the large scale for which it is intended, and the qualitative nature of the results, DRASTIC should be thought of as a screening tool or as a “coarse-grained” look at aquifer vulnerability modeling that helps guide decisions and focus resources on areas that may require more detailed analyses, whether for land use decisions or environmental protection. Although DRASTIC is useful over large areas and serves as a good first step, ultimately, when making site-specific decisions on small, local areas, additional detailed site-specific hydrogeologic modeling of contamination potential would be considered as an appropriate next step.

13 Methodology - Example Example of how ratings and weights are applied
Will use D Factor (Depth to Water) as example D receives a weight of 5 It is very significant in potential impact to GW Based on actual depth to groundwater, D also receives a rating. As an example of the application of the ratings and weights, consider factor D - Depth to Water. Following the guidelines established in the methodology, the D factor, being important in contaminant movement, receives a weight of 5. However, we also have to consider the actual depth to water.

15 What follows is an example (from my project in GEOG 487) that will give a feel for how the overlay works – how the inputs are combined to arrive at the final DRASTIC index. There won’t be much to say about these slides. I intend to move through them quickly – only a few seconds per slide. elevation

21 This slide just highlights that there are a lot of intermediate steps involved in this analysis.

23 Capstone Process Review of DRASTIC methodology Identify data needed Gather data Identify Data Gaps Fill Data Gaps or revise methodology Perform analysis Create Map Present Results To successfully develop the proposed DRASTIC model and complete the capstone project, it will be necessary to develop and follow an overall capstone process, as well as a process specific to the data analysis. The general approach to completing the Capstone project will include the following steps: Review of DRASTIC methodology – this will establish the fundamental methodology for the project Identify data needed – required data will be identified in the DRASTIC methodology guidance Gather data – mine data from public sources Identify Data Gaps – this includes data inputs that could not be located in a GIS format Fill Data Gaps or revise methodology – will need to either infer the missing inputs from other available data or will need to revise the methodology, if possible, to exclude the missing inputs. Perform analysis resulting in relative risk index Create Map Present Results, including problems encountered and suggestions for model refinement

24 Data Analysis Process Organize data Re-project into common coordinate system and datum Clip to boundary of TN if necessary Convert vector data to raster data Generalize data where appropriate Apply ratings to values and categories in each factor layer Apply weights to each input layer Sum factors Relative Risk Index is created and overlain on study area An generalized overview of the approach to performing the analyses for the project Generalize data where appropriate - for example if there a dozen types of clay represented in the soils data, then it may be appropriate to generalize to a single type for this model

25 Self-Imposed Project Parameters
Due to time constraints, need to impose parameters on the analysis Use unmodified version of method Use existing datasets as much as possible To fill datagaps will use the easier of two approaches: Derive missing data from other existing data Use generalized values in EPA guidance Because a project like this could go on for a long long time if you wanted it to, what with searching for better and better data, re-running the analysis, refining the model, and on and on, I felt it was necessary to impose to limitation on myself at the beginning. The primary time constraint is that I want to finish and graduate. I will use unmodified version I will use existing datasets wherever possible regardless of scale or resolution. Will fill data gaps be the easiest method. In order to successfully complete a DRASTIC analysis of the state within the time constraints of the capstone project, I plan to use the standard, unmodified version of the method as outlined in the EPA guidance. In other words, I will not be adding factors such as pesticides or nitrates. In addition, it will be necessary to utilize existing input data as much as possible even though available data may be of low resolution or small scale. In cases where the required data do not exist, it will be necessary to either infer the input data from other available data or to use the generalized inputs provided in the DRASTIC guidance document. When filling data gaps, where possible, the generalized inputs from the EPA guidance document will be used.

27 Anticipated Results State of TN groundwater vulnerability map
Detailed report of methodology and data used Map will be technically correct Considered FINAL within context of capstone project Considered DRAFT by public and professionals who may use it At the end of the project, I anticipate that I will have developed a basic groundwater vulnerability map of the state of Tennessee, along with a detailed report of the methodology and data used. I expect that the resulting DRASTIC relative-risk index will be technically correct from the standpoint that the DRASTIC methodology was followed and the spatial analyses were performed correctly. Although I expect the groundwater vulnerability map produced from this project to be technically correct, I also believe that it should be considered to be a DRAFT map by the public and professionals who might use it.

28 Anticipated Problems Low Resolution Data Missing data
Anticipate using only small scale data Missing data Not all inputs may be available May have to infer data or use generalized inputs Room for improvement Analysis can be easily re-run with better data Better data = better results Additional refinement outside the scope of this capstone project So, why do I think my map should be considered a “draft” and have room for improvement? Low Resolution Data: This will be due to the fact that for this project I anticipate only the use of small-scale datasets (1:250,000). The incorporation of more detailed (larger-scale) localized data into the analysis would improve the results. Missing Data: In addition, it may be necessary to fill data gaps by either inferring the missing data from other existing data, or by using the generalized values provided in the methodology guidance. Both methods may introduce inaccuracy into the data. Room for Improvement: Because of low res data and missing data/filling data gaps, the model developed by this project will have room for refinement. The incorporation of more detailed (larger-scale) localized and more accurate data into the analysis would result in a more accurate map of the relative-risk index. In other words, the relative-risk index that results from this project should be considered a first step in developing an accurate and useful groundwater vulnerability model of Tennessee, rather than a definitive final step. 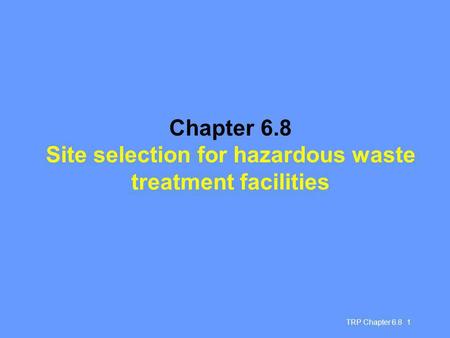 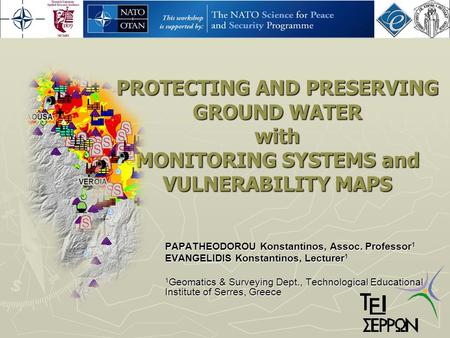 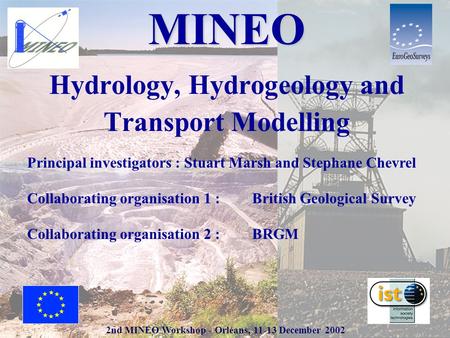 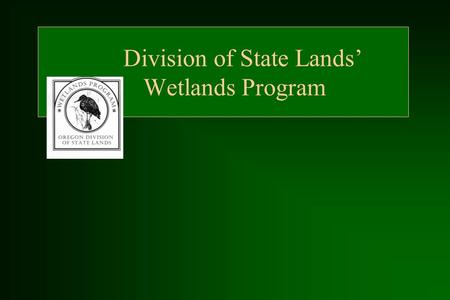 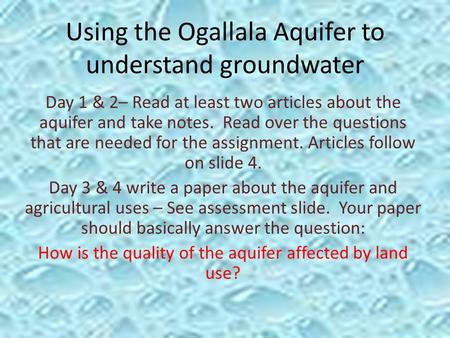 Using the Ogallala Aquifer to understand groundwater Day 1 & 2– Read at least two articles about the aquifer and take notes. Read over the questions that. 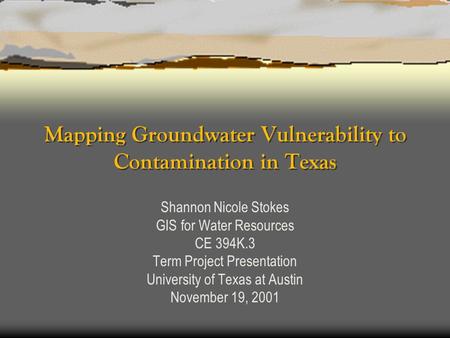 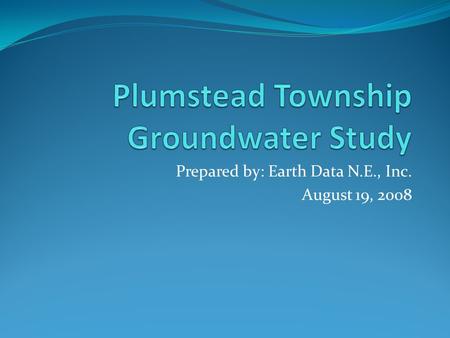 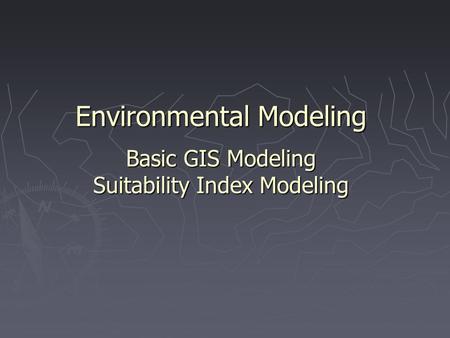 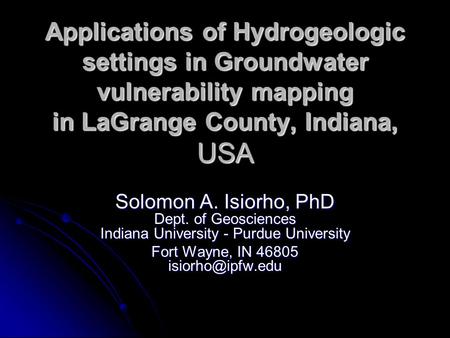 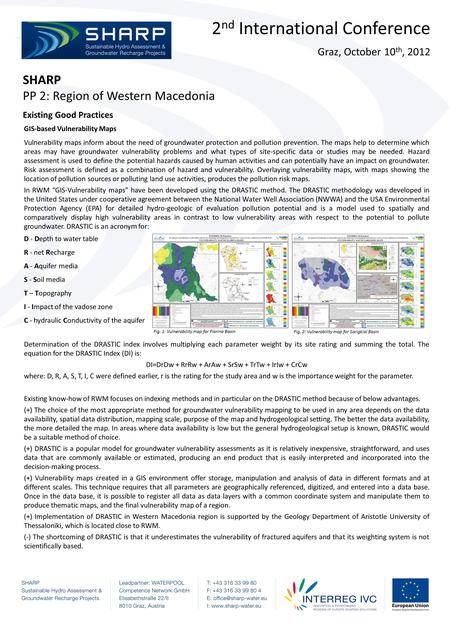 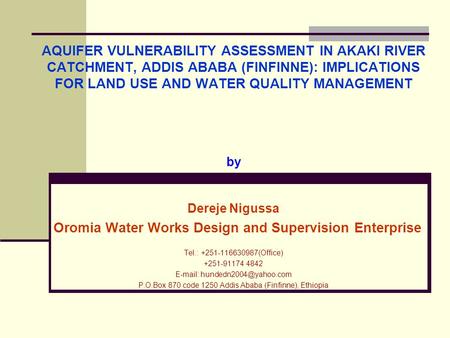 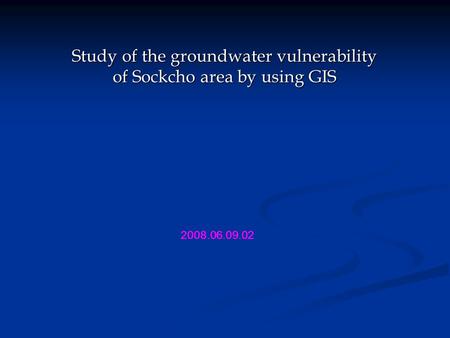 Study of the groundwater vulnerability of Sockcho area by using GIS 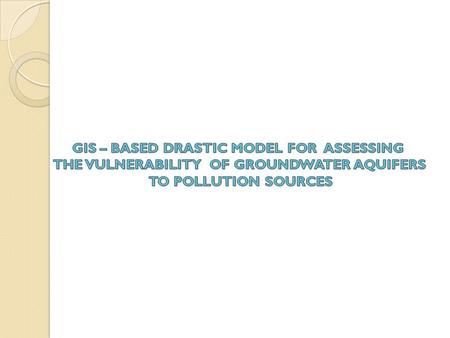 GIS – BASED DRASTIC MODEL FOR ASSESSING 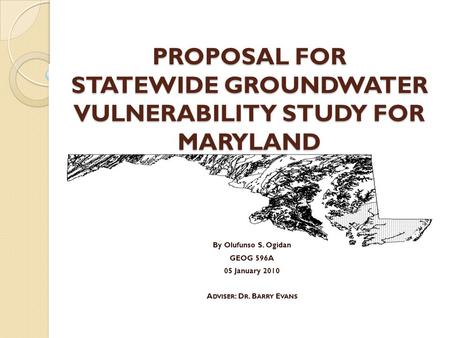 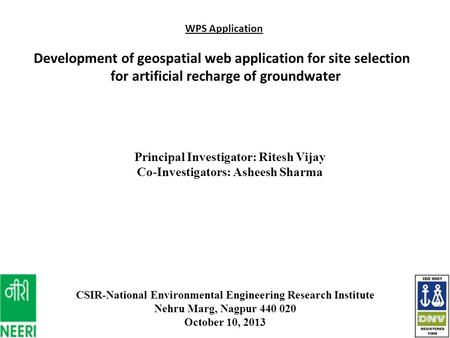 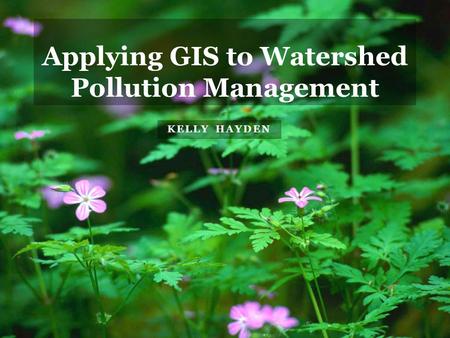 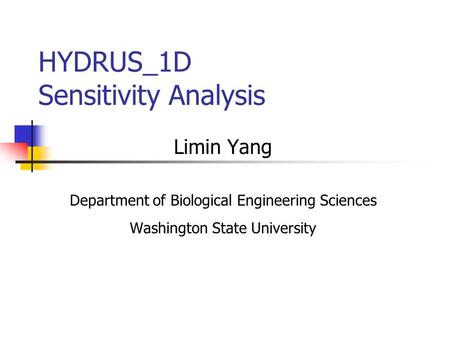 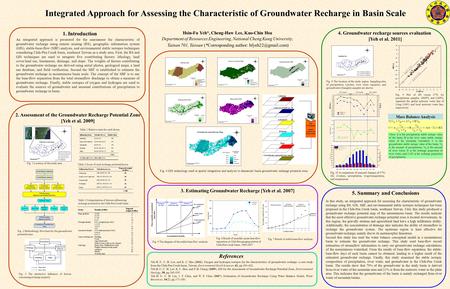 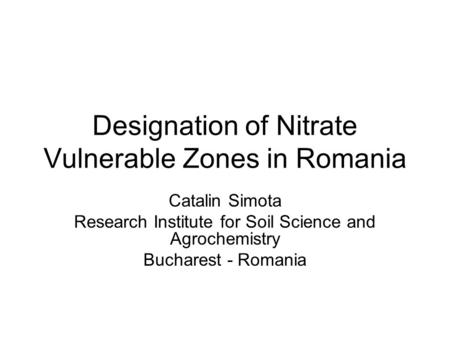 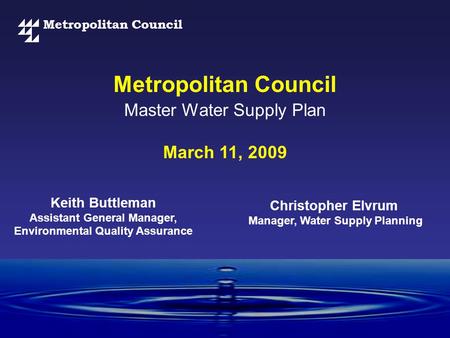