3 WILLIAM SHAKESPEARE’S CHILDHOOD When William was a little boy he got baptized april26,1564. His dad was John Shakespeare,a glover and leather merchant His mom was Mary Arden, she was a landed local daughter of a wealthy landowning farmer. He was the third of eight kids. He was the first son to survive into adulthood

4 WILLIAM SHAKESPEAR’S EDUCATION When Shakespeare was six he attended Stratford Grammar School which later on came known as King’s New School Of Stratford-Upon-Avon. At that time Latin was the primary language. At his school he learned a little English.

6 His children Six months later they became parents of a girl which they named Susanna. She was born may 26,1583. In 1585 Anne gave birth to twins The twins were born on February 2,1585

7 His children (con.) One twin was named Hamnet, which he was the second oldest. The youngest was Judith the youngest from them all. Hamnet died in August 11,1596,at age 11.

8 Williams career William studied against other playwrights of that age. William had a company that was the most successful in London in his days. Shakespeare was a very rapid writer was what some people said. He retired in 1611.

9 Williams plays William Shakespeare was famous for his plays. His plays were about tragedy and comedy. One of his plays that on this day is still known for is Romeo and Juliet. William first performed in the year between 1594 and 1595

10 Famous plays (cont.) The play Romeo and Juliet was based on two real lovers who lived in Verona, Italy and who they died for each other on1303 William Shakespeare had made history theme.

11 His death He died April 23,1616 at age 52. He had made his last will march 25,1616 His death was unknown. Someone had said had said that Shakespeare, Bryton, and Ben Johnson had a merry meeting and it seemed they drank to hard and died of fever there contracted

12 His death (cont.) William got buried April 25,1616 in Holly Trinity Church in, Stratford – Upon- Avon. He got buried 17 feet deep. His tomb is a floor beneath the church. 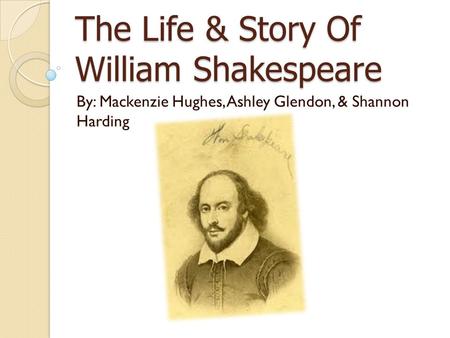 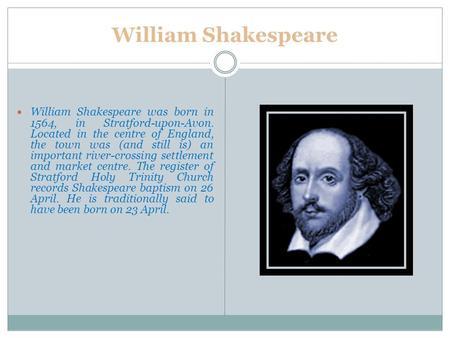 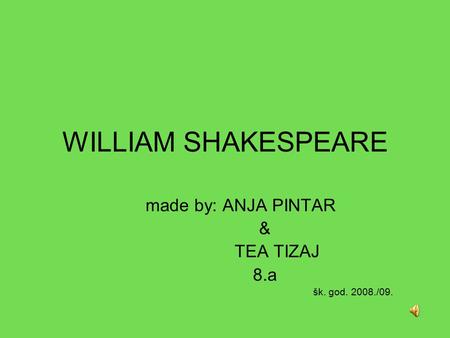 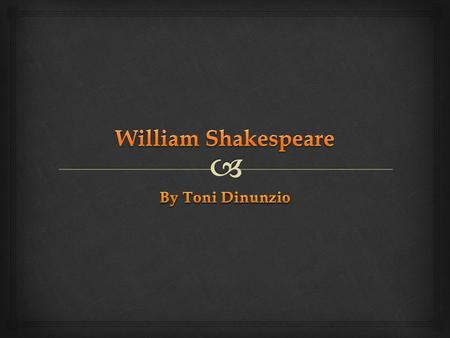