3 The enthalpy change of dry air during a process can be determined from
The atmospheric air can be treated as an ideal-gas mixture whose pressure is the sum of the partial pressure of dry air Pa and that of the water vapor Pv, P = Pa + Pv

7 Specific and Relative Humidity
The mass of water vapor present in 1 unit mass of dry air is called the specific or absolute humidity, where P is the total pressure of air and Pv is the vapor pressure. There is a limit on the amount of vapor the air can hold at a given temperature. Air that is holding as much moisture as it can is called saturated air.

9 For Saturated Air, Vapor Pressure is Equal to the Saturated Pressure of Water
(Fig. 13-4)

10 In this topic we discussed the air-water-vapor mixture, which is the most commonly encountered gas-vapor mixture in practice. The air in the atmosphere normally contains some water vapor, and it is referred to as atmospheric air. By contrast, air that contains no water vapor is called dry air. In the temperature range encountered in air-conditioning applications, both the dry air and the water vapor can be treated as ideal gases.

11 The relative and specific humidities can also be expressed as Relative humidity ranges from o for dry air to 1 for saturated air. The enthalpy of atmospheric air is expressed per unit mass of dry air, instead of per unit mass of the air-water-vapor mixture, as

13 Dew-Point Temperature
The ordinary temperature of atmospheric air is referred to as the dry-bulb temperature to differentiate it from other forms of temperatures The temperature at which condensation begins if the air is cooled at constant pressure is called the dew-point temperature TdP: Tdp = Pv

17 A more practical approach to determining the properties of air in air-conditioning applications is to use a thermometer whose bulb is covered with a cotton wick saturated with water and to blow air over the wick. The temperature measured in this manner is called the wet-bulb temperature Twb, and it is used in place of the adiabatic saturation temperature.

19 The properties of atmospheric air at a specified total pressure are presented in the form of easily readable charts, called psychrometric charts. The lines of constant enthalpy and the lines of constant wet-bulb temperature are very nearly parallel on these charts.

20 Dry-Bulb, Wet-Bulb, and Dew-Point Temperatures Identical for Saturated Air
Quality is related to the horizontal differences of P-V and T-v diagrams

21 The needs of the human body and the conditions of the environment are not quite compatible. Therefore, it often becomes necessary to change the conditions of a living space to make it more comfortable. Maintaining a living space or an industrial facility at the desired temperature and humidity may require simple heating (raising the temperature), simple cooling (lowering the temperature), humidifying (adding moisture), or dehumidifying (removing moisture). Sometimes two or more of these processes are needed to bring the air to the desired temperature and humidity level.

23 Most air-conditioning processes can be modeled as steady-flow processes, and therefore they can be analyzed by applying the steady-flow mass (for both dry air and water) and energy balances, Dry air mass: Water mass: Energy: where subscripts i and e denote inlet and exit states, respectively. The changes in kinetic and potential energies are assumed to be negligible.

24 Cooling Systems During a simple heating or cooling process (T2 >Tdp,1), the specific humidity remains constant, but the temperature and the relative humidity change. Sometimes air is humidified after it is heated, and some cooling processes include dehumidification (T2 <Tdp,1). In dry climates, the air can be cooled via evaporative cooling by passing it through a section where it is sprayed with water.

25 Evaporative Cooling At a given P and T, a pure substance will exist as a compressed liquid if T<T P

26 Mixing Airstreams Adiabatically
When two airstreams at states 1 and 2 are mixed adiabatically, the state of the mixture lies on the straight line connecting the two states

29 A Spray Pond In locations with limited water supply, large amounts of waste heat can be rejected to the atmosphere with minimum water loss through the use of cooling towers. 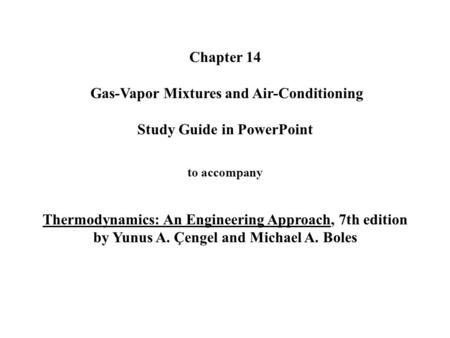 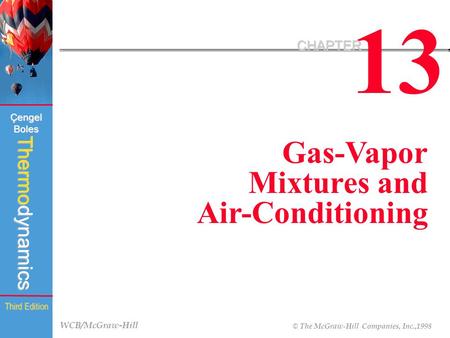 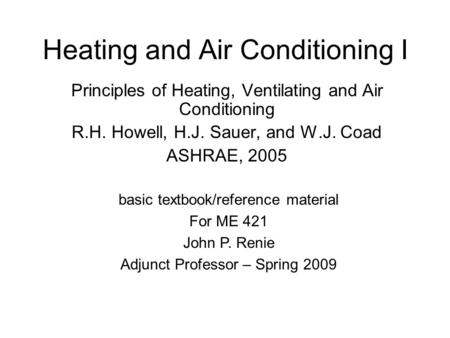 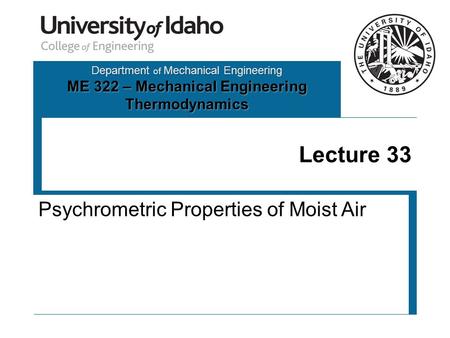 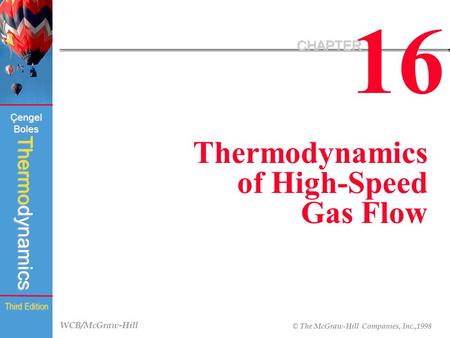 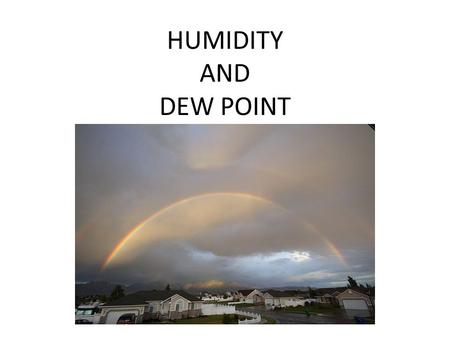 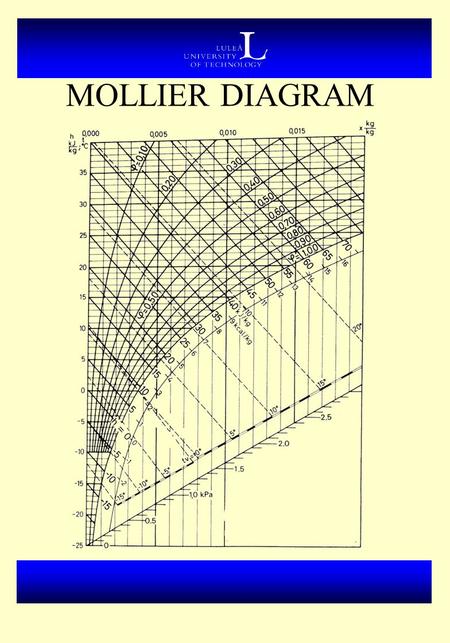 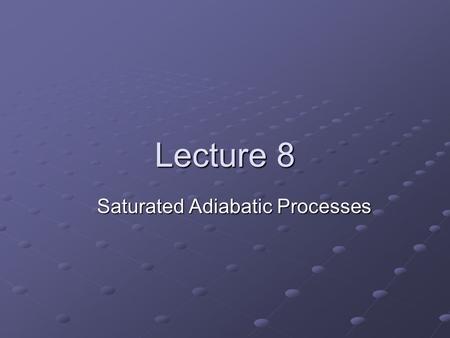 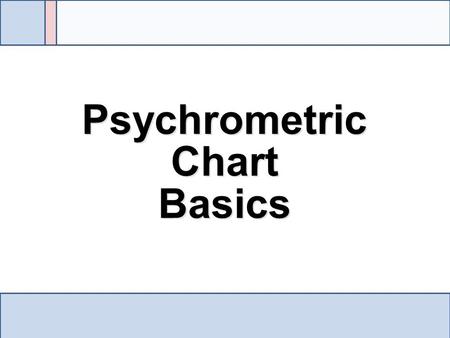 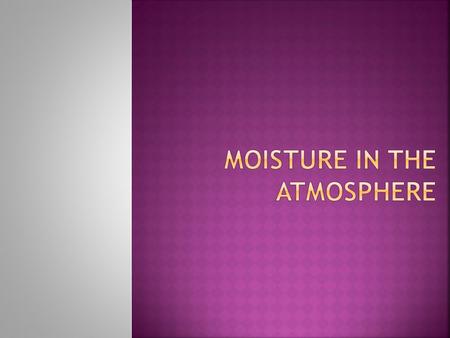  Saturation: When the air contains as much moisture as it can hold  The higher the temperature, the more moisture air can hold. 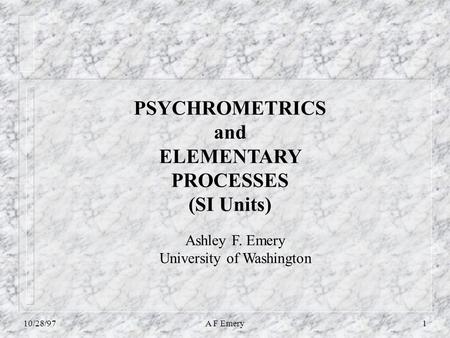 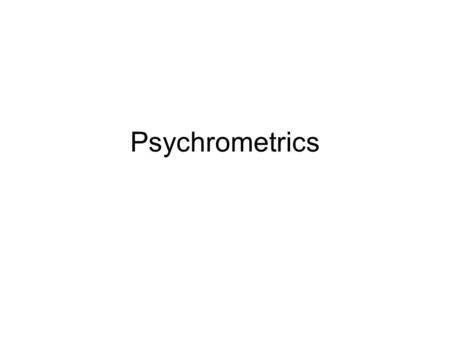 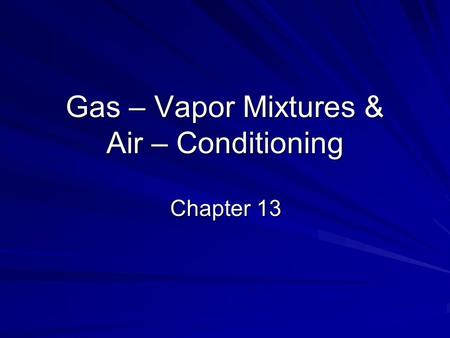 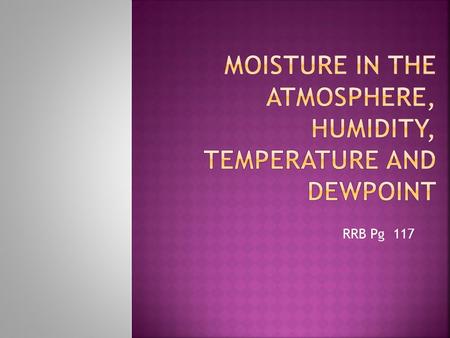 RRB Pg 117.  Saturation: When the air contains as much moisture as it can hold  The higher the temperature, the more moisture air can hold  If air. 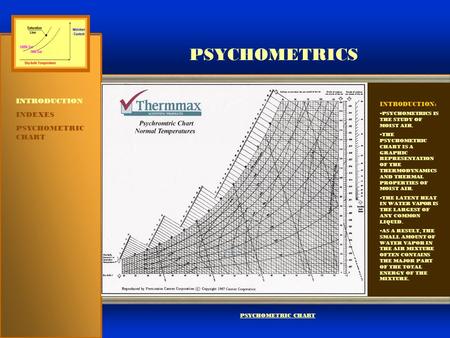 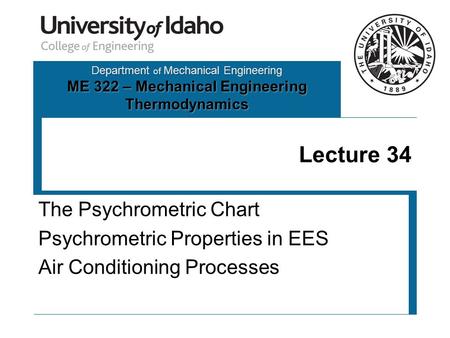 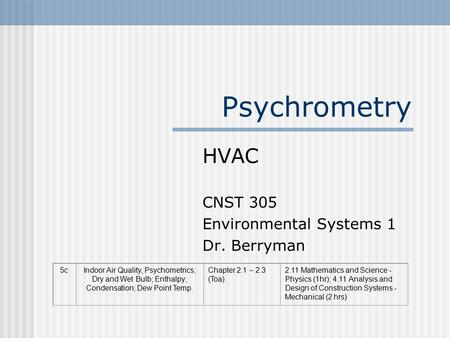 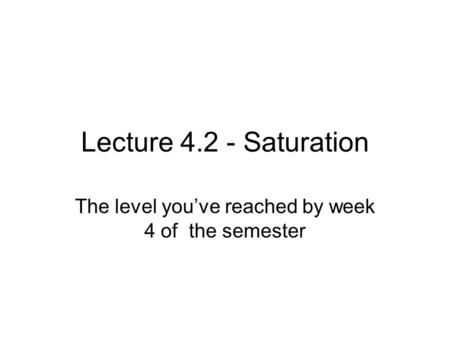 Lecture Saturation The level you’ve reached by week 4 of the semester. 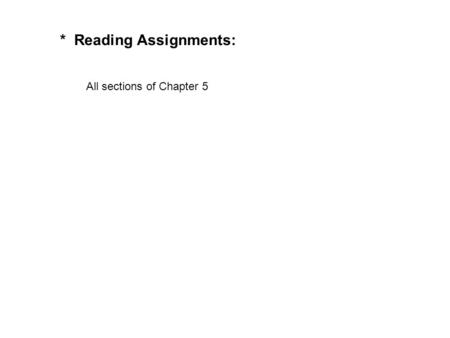