Presentation on theme: "CHEMICAL BONDS ( intramolecular forces) What are bonds? The binding forces between nuclei and valence electrons of different atoms. Why do bonds form?:"— Presentation transcript:

1 CHEMICAL BONDS ( intramolecular forces) What are bonds? The binding forces between nuclei and valence electrons of different atoms. Why do bonds form?: most atoms are unstable, having less than 8 valence electrons. Bonding allows atoms to achieve an octet The forces at work holding matter together: Intramolecular forces ( bonds) hold atoms within a compound together. vs. Intermolecular forces hold molecules of compounds to each other and are responsible for the state matter takes at a given temperature

4 METALLIC BONDS Characteristics of Metallic compounds: -composed only of metals -have excellent electrical conductivity in all states -usually solid at room temperature -display ductility and malleability (bend) -Have luster -have high bond strength ( less strong than ionic) -melting temperatures are relatively high Bond type resulting when free metal cations attract to a pool of free moving delocalized valence electrons. The bond is electrostatic in nature. The structure of the metallic bond is electrostatic in nature, but does not result in rigid alignment of +/- charge like ionic bonds. The “-” charged electrons constantly flow so the cations essentially flow easily past one another allowing the compounds to bend rather than break.

5 UNSTABLE ATOMS?! All atoms except the NOBLE GASES, group 8A are unstable and take various measures to become stable! The Octet Rule states that stable electron arrangement is one with 8 valence electrons! How do atoms obtain an OCTET? By ionization By bonding

6 IONIZATION!!! The gain or loss of e- by an atom resulting in the loss of electrical neutrality by the atom Ionization makes ions!!!: -CATIONS– positive ions formed by loss of valence e- Metals form cations -ANIONS– negative ions formed by gain of valence e- Non-Metals form anions Ionization Energy is the amount of energy required to remove an electron from a gaseous atom!! The periodic trend: As you move left to R on a period that energy goes up. As you move down a group that energy goes down. It makes sense. Things on the non-metal side don’t lose electrons easily!! Metals=losers

Download ppt "CHEMICAL BONDS ( intramolecular forces) What are bonds? The binding forces between nuclei and valence electrons of different atoms. Why do bonds form?:" 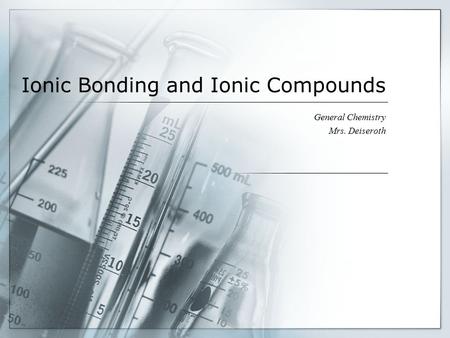 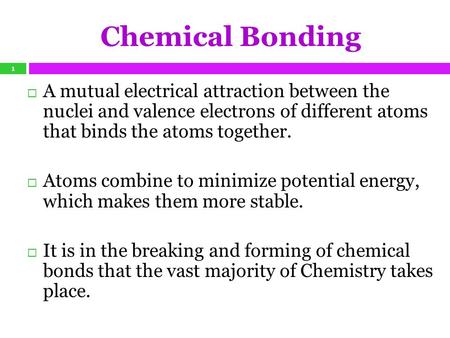 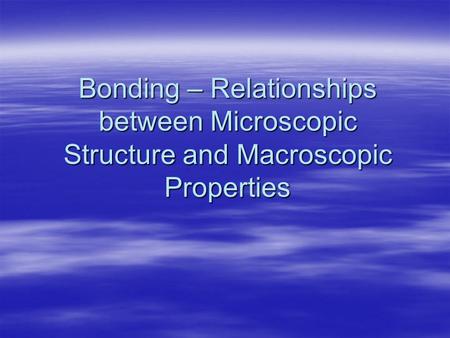 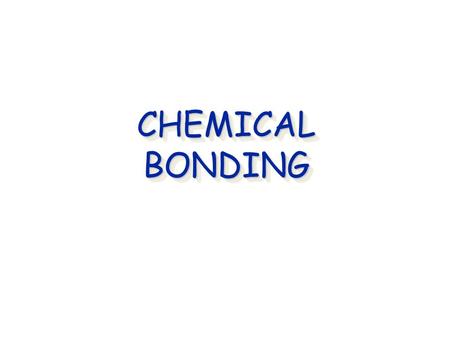 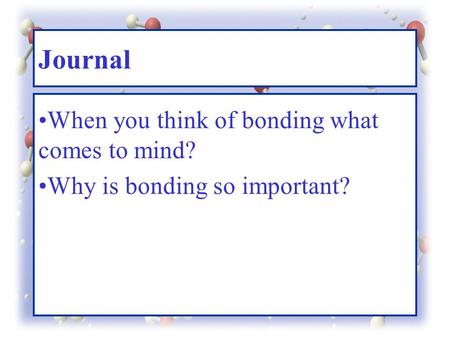