Presentation on theme: "Rights of the Accused / Steps in the Criminal Justice Process"— Presentation transcript:

2 Reasons for Protection
“It is better that ten guilty persons go free than that one innocent person be punished.”

3 Principles of the American Legal System
Society must punish criminals in order to preserve itself, but… “the law intends that any person who is suspected or accused of a crime must be presumed innocent until proven guilty by fair and lawful means.”

4 Definitions: Writ of habeas corpus – a court order which prevents unjust arrests and imprisonments Bill of attainder – a legislative act that inflicts punishment without a court trial Ex post facto law – a law applied to an act committed before its passage

5 Steps in the Criminal Justice Process
Suspect is arrested – w/ probable cause or a warrant (Miranda warnings / if necessary) Suspect is booked Formal record of arrest at jail (picture, fingerprints, background check, etc.)

6 Steps in the Criminal Justice Process
Initial Appearance Suspect goes before a magistrate judge (within 48 hours if there was no arrest warrant; within 72 hours if there was an arrest warrant) At this point, the suspect is told what he is charged with, advised of due process rights, bail is set, and advised of the process for obtaining an attorney (public defender if necessary) If suspect can’t post bail, he will remain in jail (or possibly be given a signature bond)

8 Indictment A formal complaint that the prosecutor presents to a grand jury / for felonies only District Attorney / Prosecutor gives a brief overview of the circumstances of the arrest / charges so that a Grand Jury can determine whether there is reason to indict (formally charge) the suspect of a felony. Most criminal charges are not brought by indictment, rather by an information, or an affidavit in which the prosecutor swears there is enough evidence to justify a trial.

9 Grand Jury The formal device by which a person can be accused of a serious crime. Returns a “true bill of indictment” if they find there is enough evidence for case to proceed. If no such finding is made, the charge(s) are dropped. This step of the criminal justice process is not a trial, rather a protection against overzealous prosecutors.

10 5th Amendment’s Grand Jury Provision
The only part of the Bill of Rights relating to criminal prosecution that the Supreme Court has not brought within the coverage of the 14th Amendment’s Due Process Clause.

11 Steps in the Criminal Justice Process
6. Arraignment – the suspect (and attorney) go before a judge to enter a plea (guilty, not guilty, or nolo contendere). Oftentimes, a plea bargain is made at this point – the prosecutor and defendant may make a deal in order to get the suspect to enter a guilty plea. Nolo contendere – not pleading guilty, but basically acknowledging that the evidence is stacked against you and accepting a modified punishment

12 Steps in the Criminal Justice Process
Discovery (Information) – the prosecuting attorney and the defense attorney meet to exchange lists of names of possible witnesses and physical evidence that may be used in court during the trial. (Pre-trial) Motions – both attorneys meet before the judge to file any motions such as change of venue (post-pone the trial), or a motion to suppress (not allow) certain evidence or witnesses to be used in the trial

14 Steps in the Criminal Justice Process
9. Trial: (con’t) D. After prosecution rests, the defense attorney may call for a directed verdict (asking the judge to acquit the defendant right then – rarely happens) E. Defense presents case - Each witness is called up for direct examination (by defense), cross (by prosecution), and possible recross and redirect

15 Steps in the Criminal Justice Process
9. Trial: (con’t) F. After defense rests, both sides give their closing arguments / statements (prosecution, defense, then prosecution may give a rebuttal) G. Charge to the jury – the judge explains to the jury what their options are and how the law applies to this particular case H. Jury Deliberations – in MOST cases, the jury must decide UNANIMOUSLY, that the suspect is either guilty (beyond a reasonable doubt) or not guilty; if the jury cannot reach a verdict, the judge may declare a hung jury and the process would begin all over again

16 Steps in the Criminal Justice Process
9. Trial: (con’t) I. Verdict is announced J. Sentencing (may be postponed – possible separate sentencing hearing – especially in death penalty cases) - If guilty, judge determines sentence based on guidelines provided by the government (options include various combinations of prison, probation, fines, community service, restitution, etc.) - If it’s a death penalty case, the jury decides whether the defendant should get the death penalty (must be unanimous in MOST cases) or life in prison (with or without the chance for parole)

17 5th Amendment Double Jeopardy – no person can be “twice put in jeopardy of life or limb” / once a person has been tried for a crime, he cannot be tried again for the same crime. In a trial in which no verdict is reached, there is no jeopardy. Self-Incrimination – no person can be “compelled in any criminal case to be a witness against himself” **the burden of proof is always on the prosecution

18 6th Amendment “In all criminal prosecutions, the accused shall enjoy the right to a speedy and public trial.” Speedy Trial – within a reasonable time and without undue delay Public Trial – held in public view (can have limitations) Trial by Jury – right to trial by an impartial jury (most cases do not involve jury trials) Right to an attorney – every person accused of a crime has the right to the best possible defense the circumstances will allow

19 Miranda Warnings You have the right to remain silent.
Anything you say can and will be used against you in a court of law. You have the right to an attorney and to have your attorney present while you are being questioned. If you want an attorney and cannot afford one, one will be appointed for you before any questioning. Waiver Do you understand each of these rights as explained? Understanding these rights, do you wish to make a statement?

20 8th Amendment The 8th Amendment addresses the issue of punishment for crime. It bans excessive bail and cruel and unusual punishment. Bail – sum of money that the accused may be required to post (deposit with the court) as a guarantee that he will appear in court at the proper time

21 8th Amendment Preventive detention – a judge can order a person accused of a crime held without bail when there is good reason to believe the person poses a danger to society Capital Punishment – death penalty / hotly debated topic, but the Supreme Court has ruled that it is not cruel and unusual 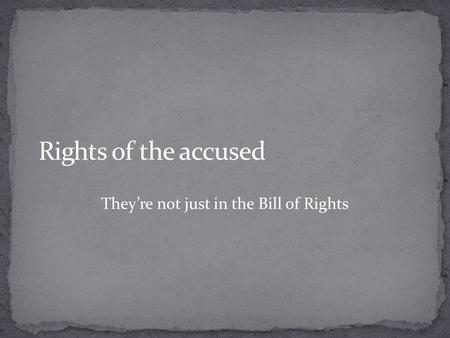 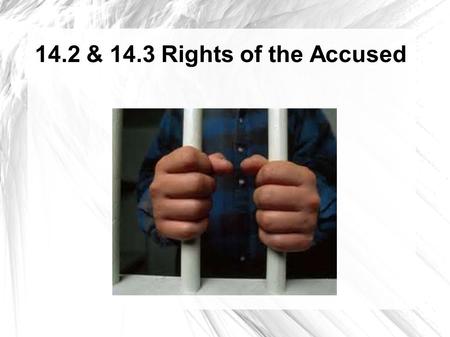