1 UNIT 2B: THE CRIMINAL JUSTICE PROCESS

2 Steps In a Trial - Felony  1. Crime Occurs  2. Investigation  3. Arrest  4. Booking  5. Initial Appearance  6. Preliminary Hearing  If a judge deems it necessary, at this point, a grand jury will meet to decide whether or not the suspect should stand trial. If the grand jury decides they should, the suspect will be indicted.  7. Bail or Detention  8. Pre-Trial Activities  Plea Bargains, Motions  9. Trial or Guilty Plea  10. Sentencing Probation If violated, the defendant must go to prison Prison After a successful sentence is completed, parole may be assigned. If parole is violated, the defendant will return to prison. Death Penalty Acquittal

3 Booking  Booking is the formal process of making a record of an arrest. During booking, the accused must provide:  Name  Date of Birth  Address  Employer  Details of Previous Arrests  At the time of the booking, the accused will be finger printed and photographed. They may also have blood drawn and/or a urine sample taken.

7 Bail or Detention?  Following a preliminary hearing, the defendant will either be sentenced to detention (jail) or they will be let out on bail.  Bail is a way for the court to insure that the defendant will return for trial. If the person released does not return, the court keeps the money. If a defendant can not afford bail, they can receive help from a bail bond agency.  If a defendant is granted personal recognizance, they will be released until the trial without having to pay any money. Ex:  If the crime is particularly bad or the defendant is a major flight risk or they are not able to pay any amount of bail, they will be put in jail until the trial.

9 Steps in a Trial 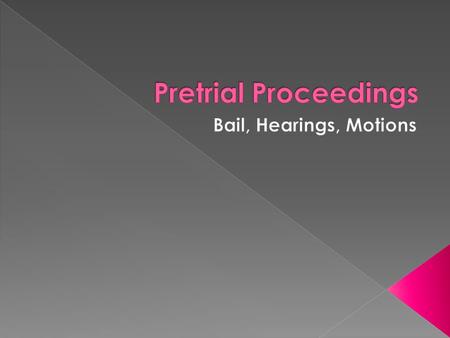 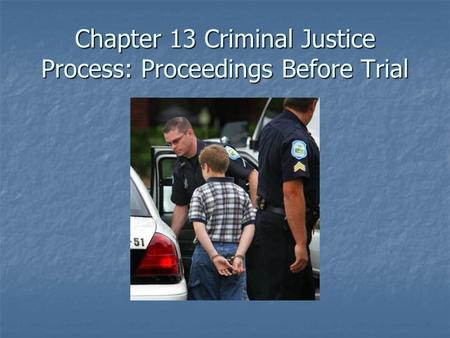