Presentation on theme: "18.1 THE NATIONAL JUDICIARY. REVIEW FROM YESTERDAY What is the difference between civil and criminal? What does the Supreme Court do? How many judges."— Presentation transcript:

2 REVIEW FROM YESTERDAY What is the difference between civil and criminal? What does the Supreme Court do? How many judges are on the Supreme Court? Can you name one? What do we need a judicial system?

3 “Laws are a dead letter without courts to expound and define their true meaning and operation.” – Alexander Hamilton in Federalist No. 22 What did he mean?

4 CONSTITUTION CREATES FIRST COURTS Article III, Section I states: “The judicial Power of the United States shall be vested in one supreme Court, and in such inferior Courts as the Congress may from time to time ordain and establish.”

5 BASIC INFO There are TWO separate court systems in the US Federal courts State courts Most cases are heard in State, not federal, courts Diagram 1 p. 507

6 FEDERAL COURTS There are two kinds of Federal Courts 1.Constitutional Courts 2.Special Courts Jurisdiction (authority of a court to hear a case) Based on subject matter Based on parties involved All cases that are not heard by the federal courts are within the jurisdiction of the States’ courts You must read the chart on page 508 for specifics for the test next week.

7 TYPES OF JURISDICTION Exclusive jurisdiction: cases that can be heard ONLY in federal courts. Concurrent jurisdiction: both State and federal courts can hear these cases. Congress requires involvement of at least $75,000 in a case of diverse citizenship to reach federal courts This is to ensure neutrality in cases between states for example Plaintiff: person who files suit; they must bring the case to State or federal court Defendant: person whom the complaint is against; can have the trial moved to federal district court under special circumstances

10 JUDICIAL RESTRAINT Judicial restraint- judges try to decide cases based on: (1) original intent of those who wrote the Constitution or the statute(law) (2) precedent—or what other judges have decided before them

12 JUDICIAL TERMS Judges in federal courts are appointed for life They either resign, die, or retire there are no term/age limits Colorado State judges can serve until they are 72. Judges are retained by voters at the end of their term.  County court- unlimited 4 yr terms  District court-unlimited 6 yr terms  Appellate courts-unlimited 8 year terms  Supreme Court of Colorado-unlimited 10 yr terms

13 LIFE TERMS What is the reasoning behind allowing Federal judges to rule so long? Opposite view Why do you think Colorado passed age limits?

Download ppt "18.1 THE NATIONAL JUDICIARY. REVIEW FROM YESTERDAY What is the difference between civil and criminal? What does the Supreme Court do? How many judges." 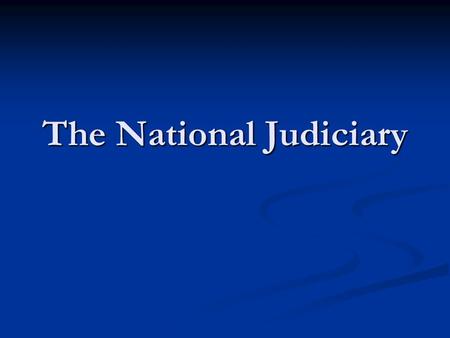 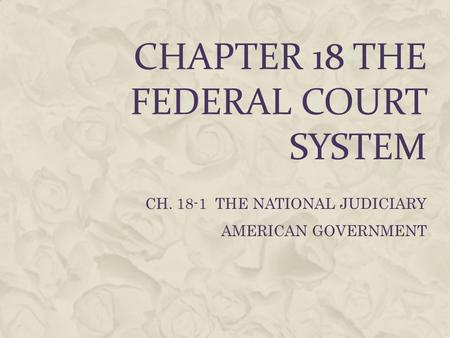