Presentation on theme: "Endow the king with justice, Lord, the royal son with righteousness. Your people, your afflicted ones, he’ll judge with truth and uprightness. The mountains."— Presentation transcript:

1 Endow the king with justice, Lord, the royal son with righteousness. Your people, your afflicted ones, he’ll judge with truth and uprightness. The mountains will bring peace to them, the hills the fruit of righteousness. He will defend and save the poor, and crush all those who them oppress. [Sing to the Lord 72]

2 2. As long as sun and moon endure, so will he live time without end. He’ll be like showers on the earth, like rains that on mown fields descend. The righteous then will blossom forth throughout his everlasting reign. Until the moon no longer shines, peace in abundance will remain.

3 3. From sea to sea he will hold sway and from the river to earth’s end. His enemies will lick the dust, and desert tribes the knee will bend. Then Tarshish and the distant shores will send the tribute of their kings, Sheba’s and Seba’s kings will come and bring to him their offerings.

4 4. All kings will humbly bow to him, and nations worship him with fear. He’ll save the needy when they call, the poor for whom no help is near. He will take pity on the weak and save them from oppressive might. He’ll rescue them from violence; their blood is precious in his sight.

5 5. Long may he live! May Sheba’s gold be given him abundantly! May people ever pray for him and bless his name continually. Let grain abound throughout the land, the tops of hills their harvest yield; may they bear fruit like Lebanon and thrive as grass grows in the field.

6 6. Forever may his name endure; may it continue as the sun. All nations will be blest in him, whom they will call the blessed one. Praise to the L ORD – to Isr’el’s God; his awesome deeds proclaim to men. His name be praised eternally, his glory fill the earth. Amen! Sing to the Lord 72 Used with permission Text: Sing Psalms, © Psalmody Committee, Free Church of Scotland, 2003, alt. Tune: Charles H. Gabriel, 1898

Download ppt "Endow the king with justice, Lord, the royal son with righteousness. Your people, your afflicted ones, he’ll judge with truth and uprightness. The mountains." 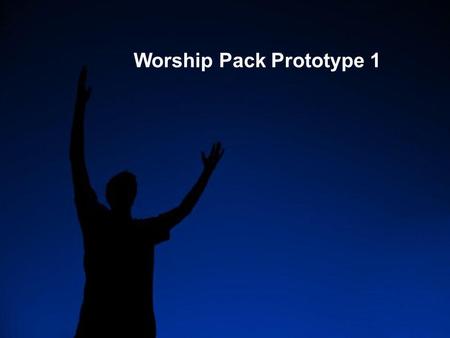 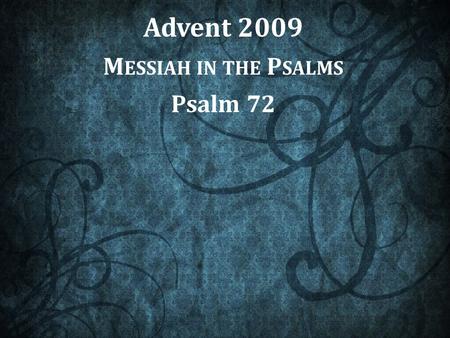 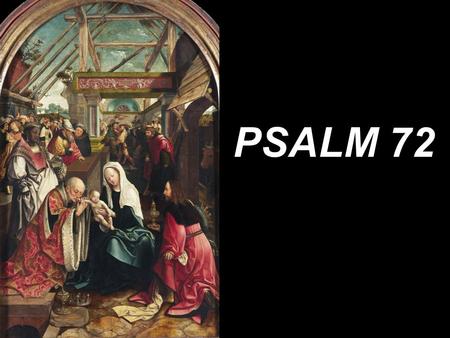 PSALM 72. LORD, EVERY NATION ON EARTH WILL ADORE YOU. 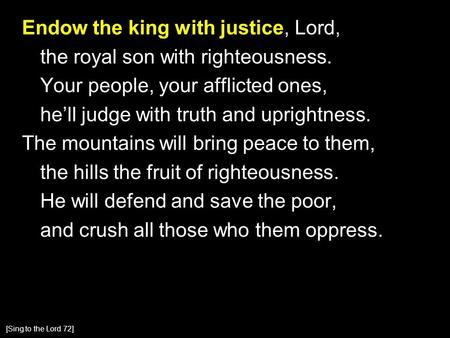 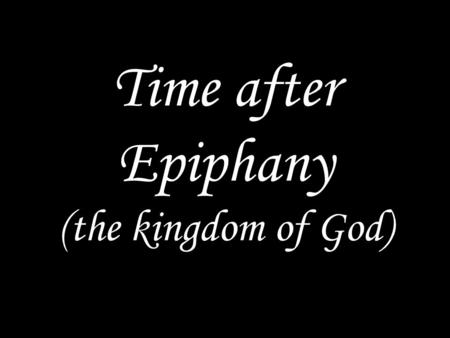 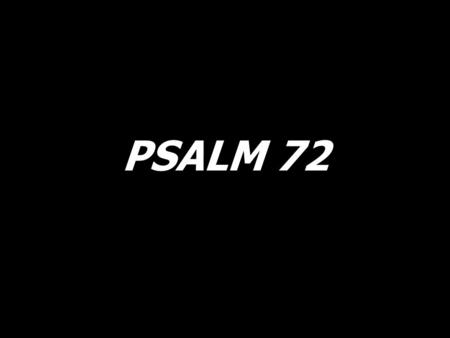 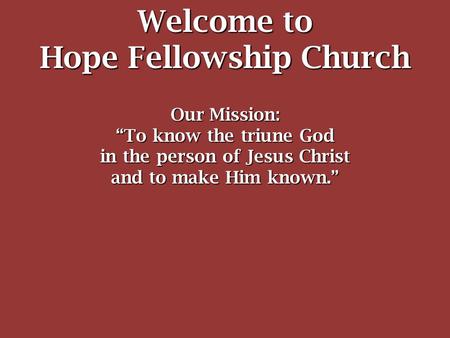 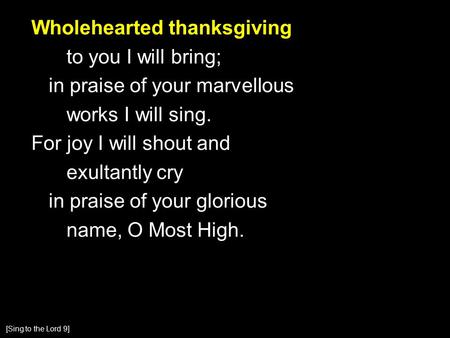 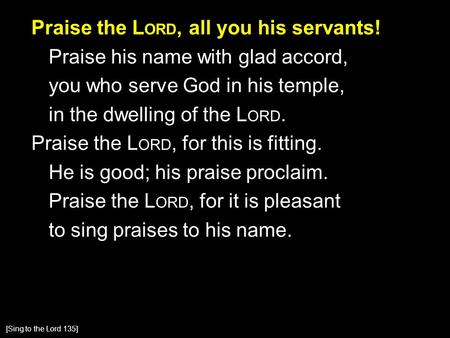 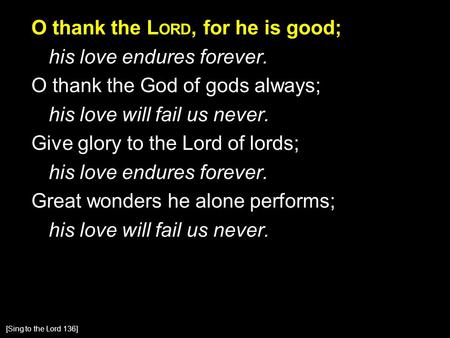 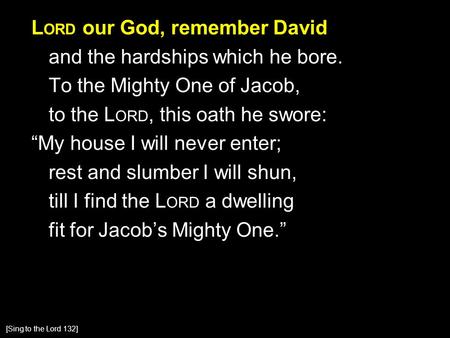 L ORD our God, remember David and the hardships which he bore. To the Mighty One of Jacob, to the L ORD, this oath he swore: “My house I will never enter; 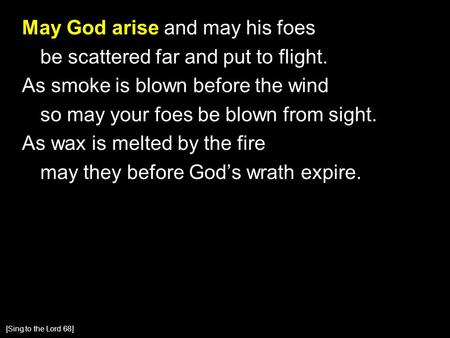 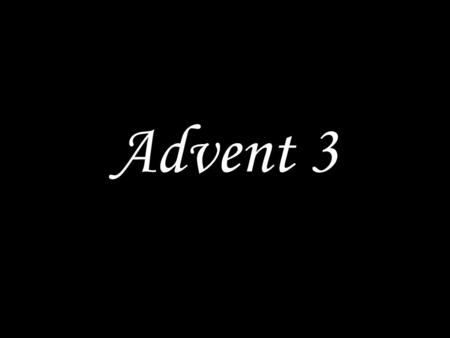 Advent 3. GOD WELCOMES US The eyes of the blind shall be opened, and the ears of the deaf unstopped; the lame shall leap like a deer, and the tongue of. 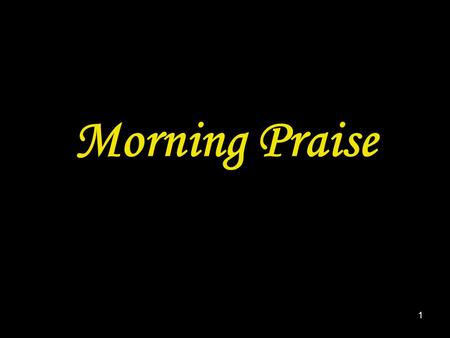 1 Morning Praise. 2 A song or hymn may be inserted here. 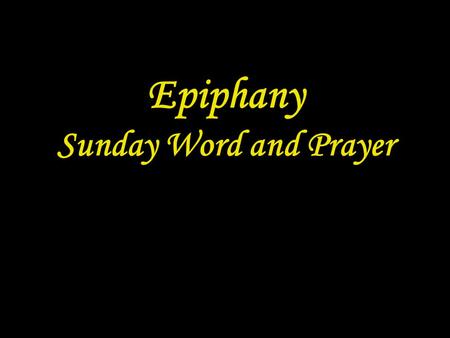 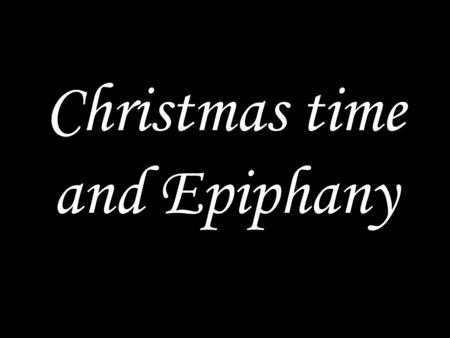 Christmas time and Epiphany. WE COME TO GOD IN PRAYER Alleluia! Christ has appeared to us. Come, let us worship him. Alleluia! Glory to the Father and. 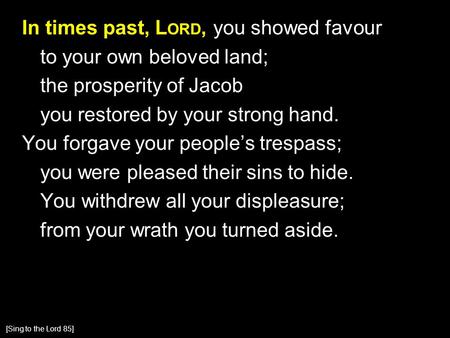 In times past, L ORD, you showed favour to your own beloved land; the prosperity of Jacob you restored by your strong hand. You forgave your people’s trespass; 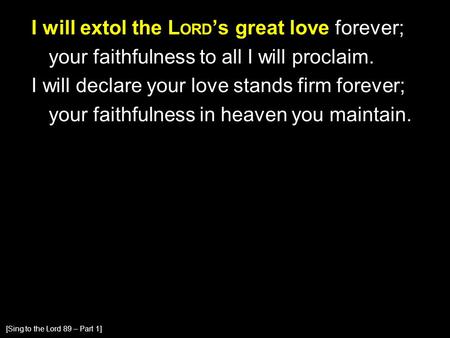 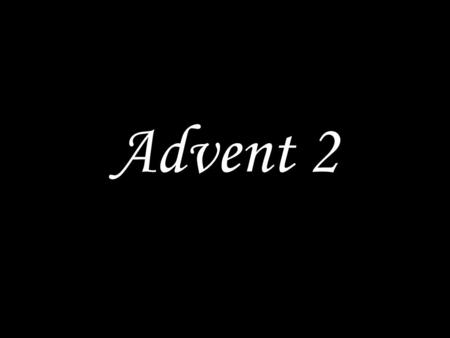 Advent 2. GOD WELCOMES US A shoot shall come out from the stump of Jesse, and a branch shall grow out of his roots. The Spirit of the Lord shall rest. 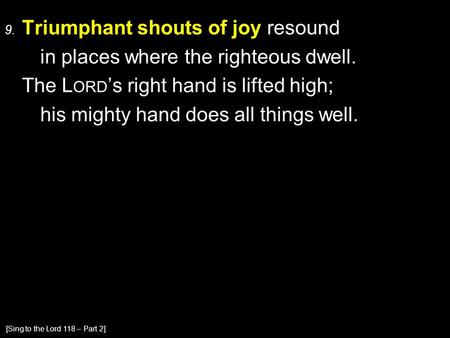 9. Triumphant shouts of joy resound in places where the righteous dwell. The L ORD ’s right hand is lifted high; his mighty hand does all things well.