2 Problem Description Poor Diet No Exercise Both of these issues have led me to gain weight and lose muscle mass. This in turn has decreased my energy levels.

3 My Goal First, to begin an exercise routine that will increase in volume and intensity as I become more fit. This will result in increased muscle mass as evidenced by increasing weight load. Resting pulse rate will also decrease. The exercise will also assist in decreasing body weight related to excess fat. Second, to change my eating habits to food lower in fat and sodium and higher in complex carbohydrates and protein. Also, to decrease total caloric consumption daily. This will result in a decrease in body fat as evidenced by a decrease in body weight.

5 Exercise Before Intervention No set schedule. Workouts were fit in at any time I felt motivated enough to do it. Frequency of exercise varied from once to three times per week. Intensity of Exercise varied from 15 minutes to 60 minutes. Weight lifted was not measured.

11 Schedule/Lifestyle Change A bench press with cage, dumbbells, stationary bicycle, EZ bar, and punching bag were set-up in the basement with a TV placed in front of the bicycle. A food scale was placed in the basement. My hospital shifts were cut down to 2 days per week: Saturday and Sunday. My shifts were changed from night to day 3 weeks later. My process owner affects my eating habits because he does most of the shopping. I have instructed him to stop purchasing frozen food and to stop purchasing canned soups. I have begun shopping for items to replace those items. Data was collected for 10 weeks.

13 Total Sodium Total daily sodium intake did not exceed the UCL after the CQI intervention began. However, there is one occasion noted when the limit set in the goal was exceeded. Before the intervention began there was a significantly high amount of days exceeding the limit as evidenced by the UCL being crossed.

17 Bench Press Weight The above chart depicts the trend in the amount of weight lifted on the bench press. As can be seen, there is an upward trend in weight lifted from the start of the CQI intervention.

18 Body Weight Trend The above chart depicts the trend in body weight from the start of the CQI intervention. As can be seen, there is a downward trend.

20 Results and New Goals The first nine days showed failures in meeting the goals of exercise and diet; however, there was improvement in every category with no significant failure after day nine. My main interventions began after day nine. This is the point were I transitioned from working 3 twelve hours shifts per week to working 2 and from working night shifts to working day shifts. The best change was the transition from working nights to days. This improved my sleep dramatically which resulted in more energy for exercise and preparing a proper meal. 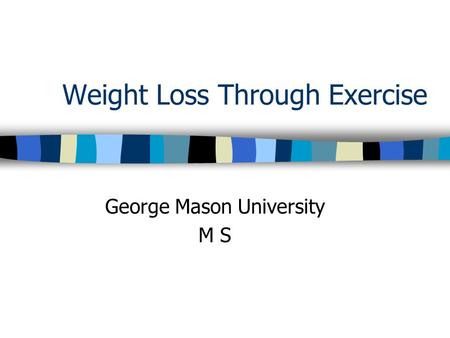 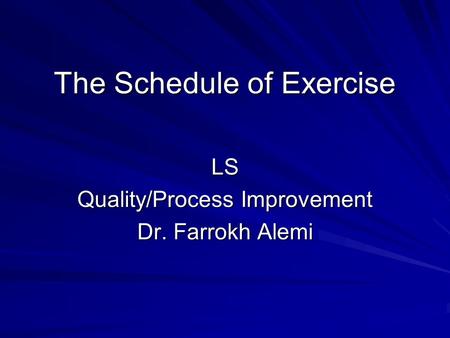 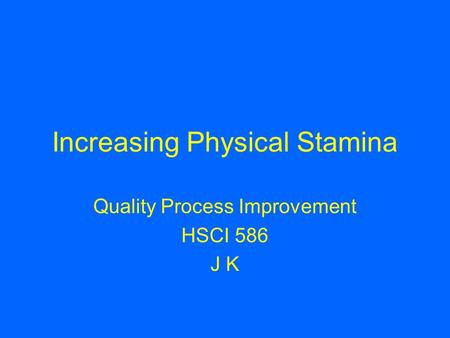 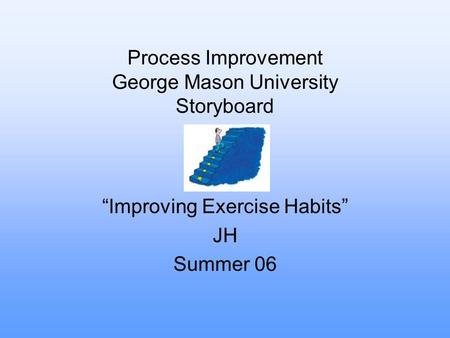 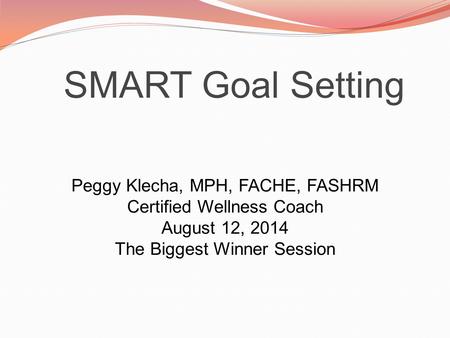 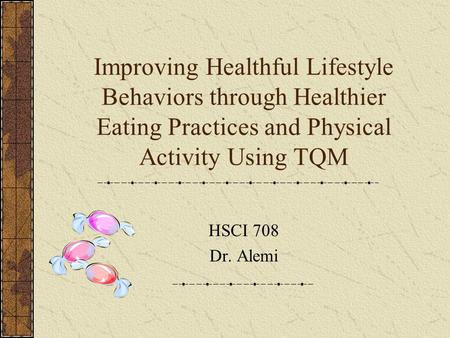 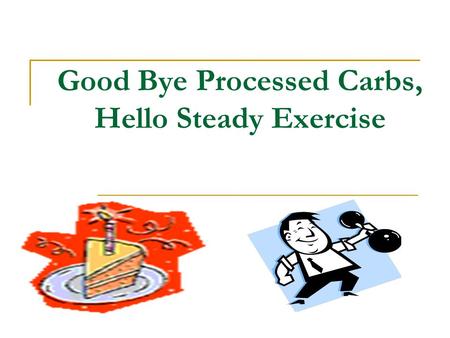 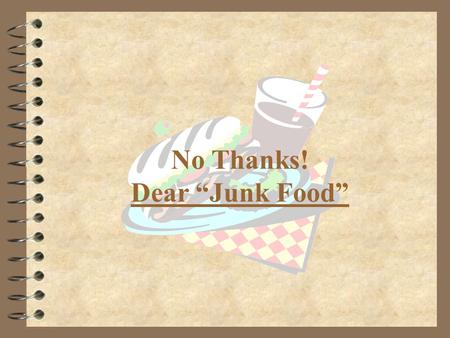 No Thanks! Dear “Junk Food”. Problem Definition 4 Relying on “junk food” most of the time for the daily dietary needs. 4 Just filling up the stomach to. 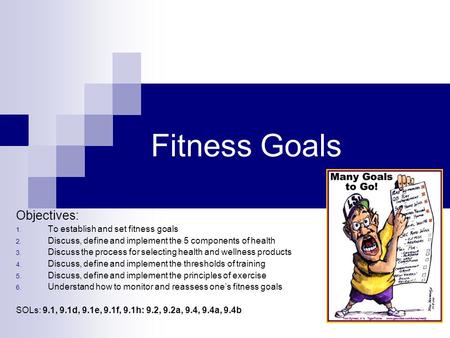 Fitness Goals Objectives: 1. To establish and set fitness goals 2. Discuss, define and implement the 5 components of health 3. Discuss the process for. 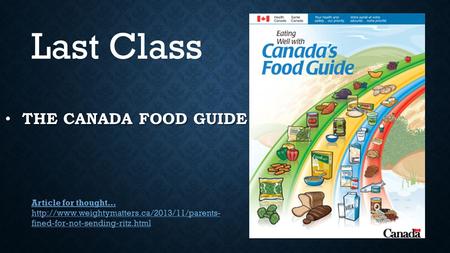 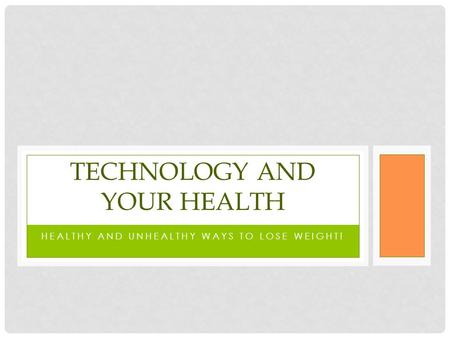 HEALTHY AND UNHEALTHY WAYS TO LOSE WEIGHT! TECHNOLOGY AND YOUR HEALTH. 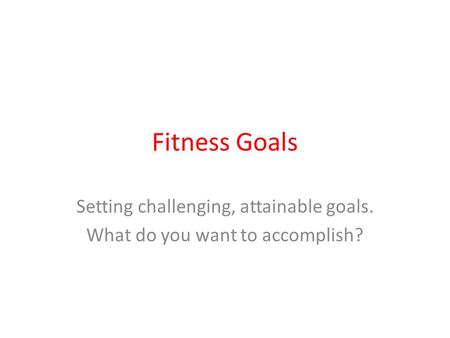 Fitness Goals Setting challenging, attainable goals. What do you want to accomplish? 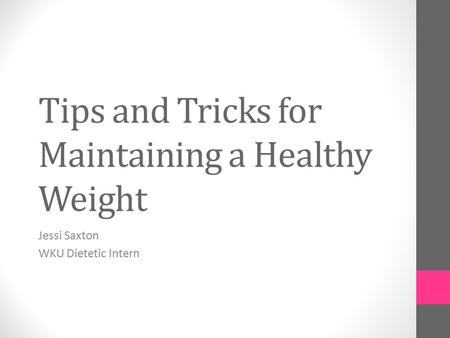 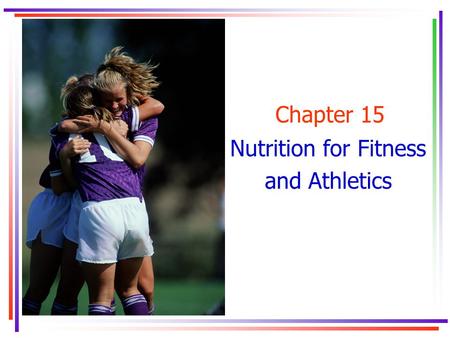 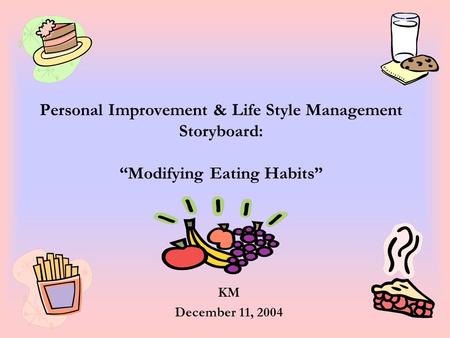 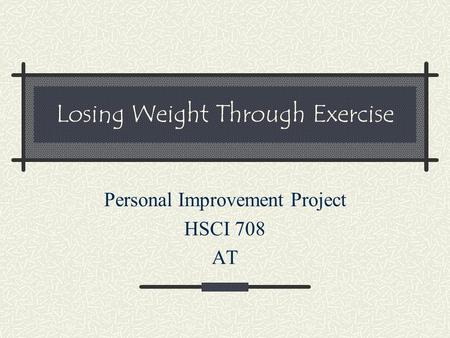 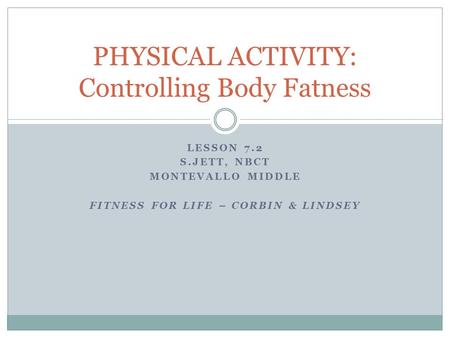 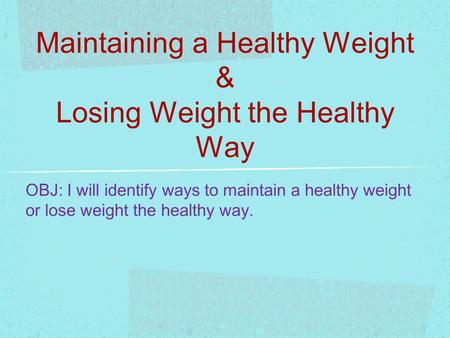 Maintaining a Healthy Weight & Losing Weight the Healthy Way OBJ: I will identify ways to maintain a healthy weight or lose weight the healthy way. 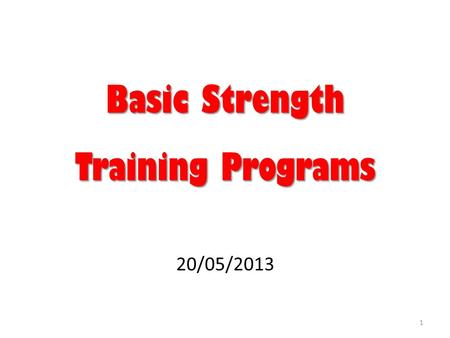 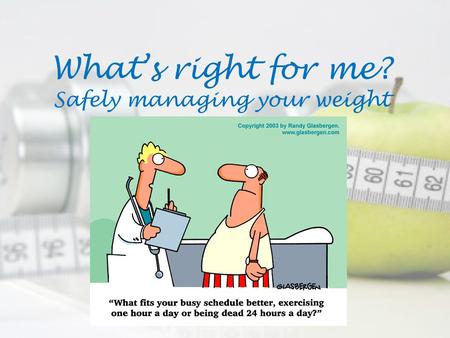 What’s right for me? Safely managing your weight.