2 Types of Cakes · Shortened Cakes-contain fat such as butter, margarine, or shortening. Also called butter cakes. Most are leavened with baking powder or baking soda.

3 Types of Cakes Pound cakes are a type of shortened cake that do not contain a chemical leavener.

4 Types of Cakes Unshortened Cakes-sometimes called foam cakes, contain no fat. They are leavened by air, which is beaten into eggs, and by steam, which forms during baking. Examples are angel food cake and sponge cake. The difference between these two is the egg content. Angel food cake contains just egg white. Sponge cakes contain the whole egg.

5 Types of Cakes Sponge cakes are made with an egg foam that contains yolks.

7 Panning and Scaling Cakes
Baking pans are usually coated with fat and flour or lined with parchment paper. Commercial pan preparations are also available. Pans should be filled one-half to two-thirds full. Spread the batter evenly with an offset spatula. When making multiple cakes or multi-layer cakes, fill the pans to the same level. Have the pans prepared before mixing the batter. Pans should be filled as soon as possible after mixing is complete so that air cells in the batter will not collapse.

8 Shortened Cakes In order to get cakes consistent size, the batter is scaled before it is panned. Place pans in the oven so the heat circulates freely around the cake. The pans should not touch each other or any part of the oven—this creates hot spots and the cake will bake unevenly.

9 Shortened Cakes To test a cake for doneness-lightly touch the center with your fingertip. If the cake springs back, it is done. You can also insert a toothpick in the center of the cake, if it comes out clean, the cake is done. Look to see if the cake has pulled away from the sides of the pan.

11 Angel Food Cakes Beat the egg whites with some of the sugar
Carefully fold the flour and remaining sugar into the beaten egg whites. Usually baked in an ungreased tube pan.

12 Angel Food Cakes The ingredients should be at room temperature. Egg whites that are cold will not achieve maximum volume when beaten. After removing an angel food cake from the oven, immediately suspend the pan upside down over the neck of a bottle. This prevents the loss of volume during cooling. Cool completely before removing from pan.

13 Angel Food Cakes A high quality unshortened cake has a large volume, spongy interior. It is tender and moist but not gummy.

15 Chiffon Cakes 1.  Combine the egg yolks, oil, liquid and flavoring with the dry ingredients. 2.  Beat the mixture until smooth. 3.  Beat the egg whites with the sugar and cream of tartar. 4.   Fold the egg white mixture into the other mixture.

16 Fillings and Frostings
Fluffy whipped cream, creamy puddings, and sweet fruits are popular fillings for cakes. Spread the fillings between layers of cake or roll them into the center of a jelly roll. You can also spoon them into a cavity dug into the middle of the cake.

17 Frosting a Cake Brush crumbs from the surface of the layers.
Arrange strips of waxed paper on a cake plate. Cover only the edges of the plate. 3. Frost the top of the bottom layer.

18 Frosting a Cake Put the top layer on top of the frosting or filling. Frost the sides of the cake. Then frost the top of the cake. Gently and slowly remove each piece of waxed paper from under the cake.

19 Frostings Cooked frostings-use the principles of candy making. They include ingredients that interfere with the formation of crystals in a heated sugar syrup. They you beat them until fluffy. Uncooked frostings-are made by beating the ingredients together until they reach a smooth, spreadable consistency.

23 Making Italian Buttercream
Place the egg whites and water in bowl of a stand mixer. Whip until they begin to foam. Gradually add the sugar and continue whipping until the whites form stiff peaks.

24 Making Italian Buttercream
Place the sugar in a medium sized saucepan. Slowly add the water and place the pan over medium high heat. Cook the syrup until a thermometer reads 248º-250ºF.

25 Making Italian Buttercream
Turn the mixer to low speed and carefully pour the syrup between the whisk and the side of the bowl. Leave the mixer running and cool the meringue to 80ºF. Add the butter- 2 Tablespoons at a time. Add your favorite flavoring.

27 Buttercream Frostings
Swiss Buttercream-made with Swiss meringue and butter. A Swiss meringue is made from egg whites and sugar that are warmed over a hot water bath while they are beaten. This warming gives the meringue better volume and stability. 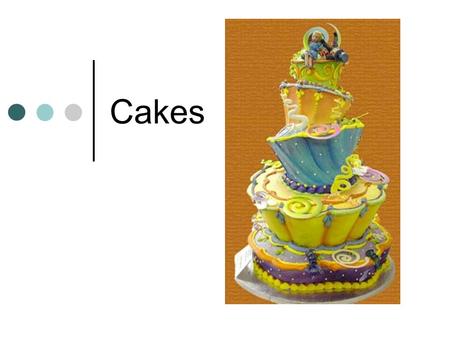 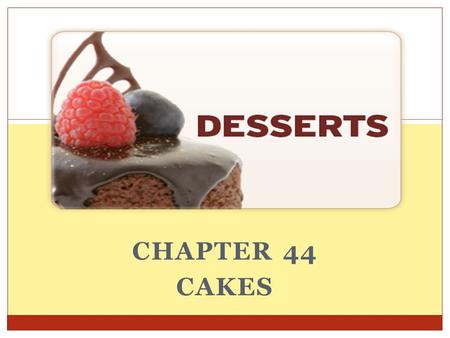 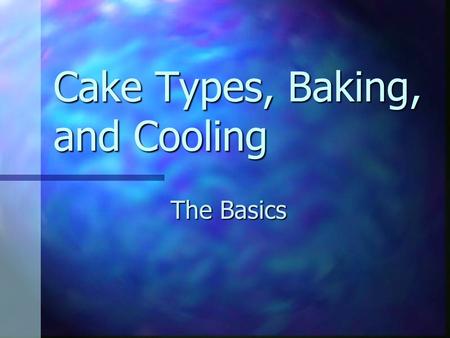 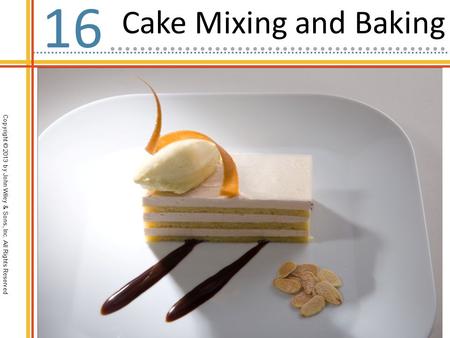 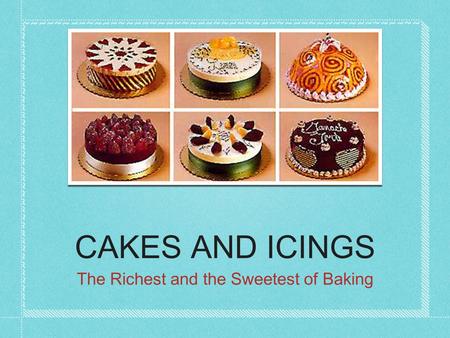 CAKES AND ICINGS The Richest and the Sweetest of Baking. 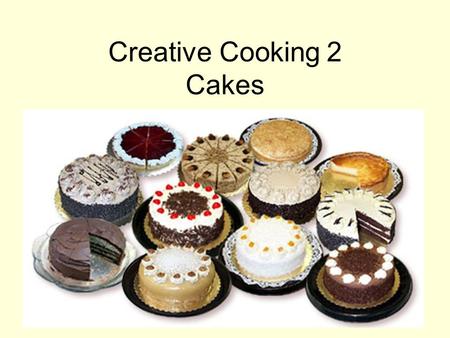 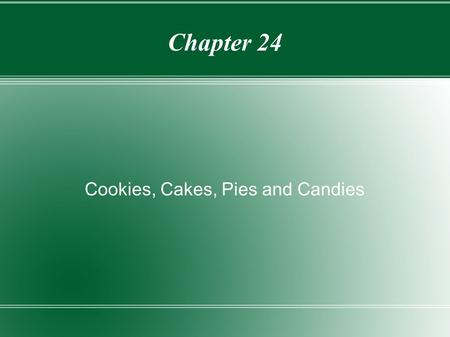 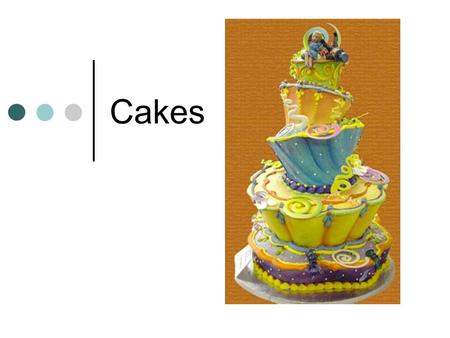 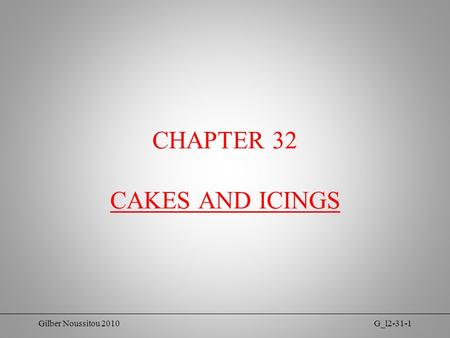 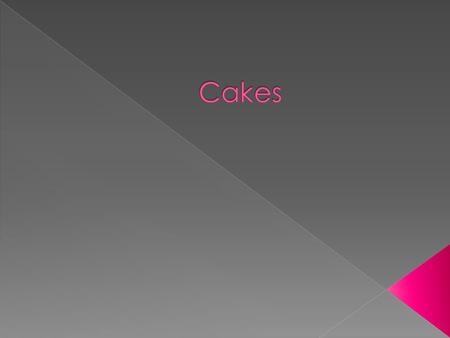 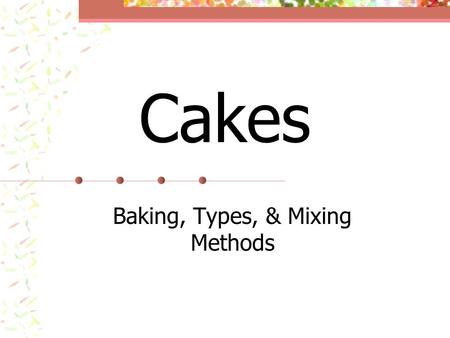 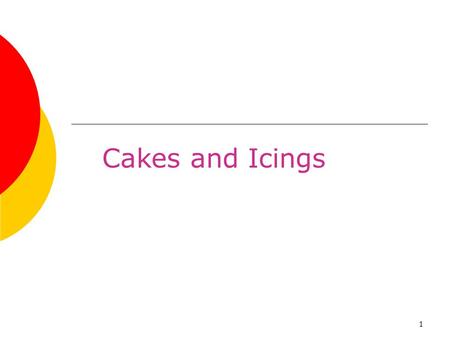 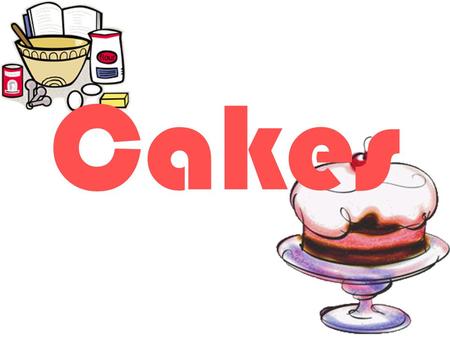 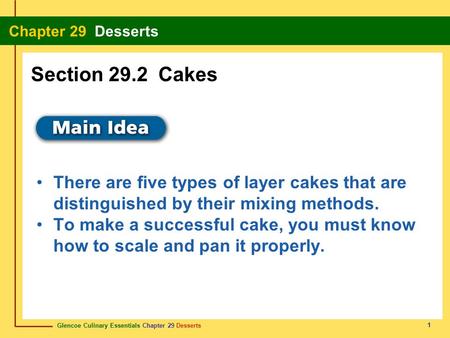 Section 29.2 Cakes There are five types of layer cakes that are distinguished by their mixing methods. To make a successful cake, you must know how to. 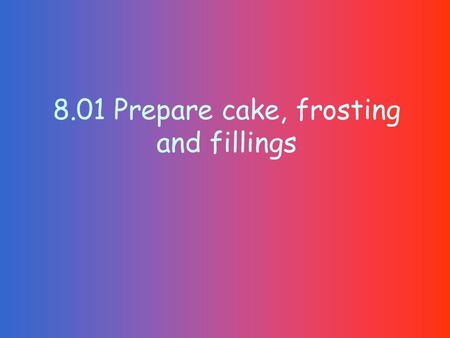 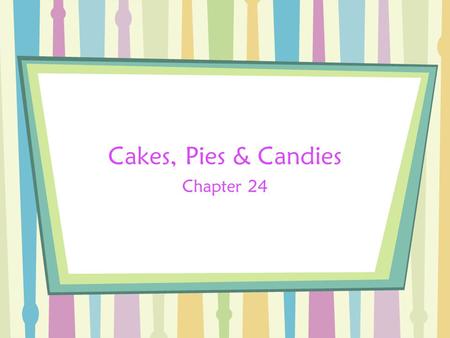 Cakes, Pies & Candies Chapter 24. Bell Work Have you ever made cakes, pies or candies? What was your favorite? What was the easiest part of making these. 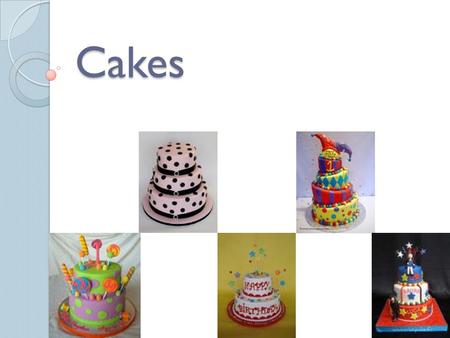 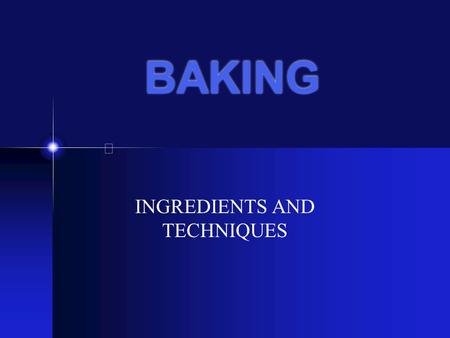 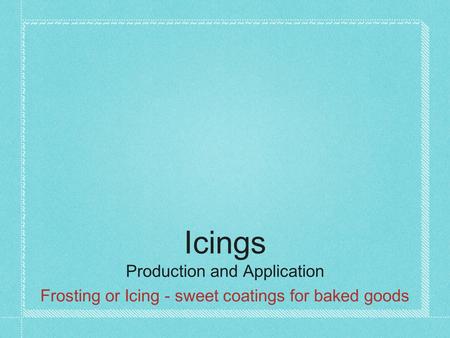