1 Criminal Procedure: Pretrial
Arrest: Upon arrest police will read you your MIRANDA RIGHTS “You have the right to remain silent…..” Based on your 5th Amendment rights to be free from “self-incrimination” MOST DEFENSE ATTORNEYS SAY: DON’T TALK TO THE POLICE!!!!! 4/14/2017

2 Procedures Following Arrest
Booking: Police again advise you of your rights and have you sign a document stating that you are aware of them Fingerprinting, mug shots ,and personal data collected Possible participation in a lineup Police will try to get a statement Information is turned over to prosecutor 4/14/2017

3 County Prosecutor Lawyer for the Government against you Decides:
Does the case have merit? Is there enough evidence to convict based on complaint filed? Options: Downgrade the charges: easier to convict Send to Municipal Court for lesser offense 4/14/2017

4 You are now the DEFENDANT
Complaint: Formal charge issued by law enforcement agent or a citizen against you claiming that you committed a certain crime. Superior Court: Serious offenses Municipal Court: Lesser offenses “Disorderly persons” 4/14/2017

5 Arrest and detention are SERIOUS infringements on your liberties
5TH Amendment: You cannot be denied “life, liberty, or property, without DUE PROCESS of law” DUE PROCESS guarantees that if the government is going to take away your liberty they must follow proper criminal procedures Thus authorities must have probable cause that you are guilty of a crime. 4/14/2017

6 First Appearance / Initial Appearance
You meet the judge Told again what you are being charged with Informed of your rights Legal Counsel offered Bail Set for Serious offenses Misdemeanor offenses ROR: Released on your own Recognizance - You promise to show up to your trial 4/14/2017

8 arraignment Requirements for proof of probable cause:
Indictment from grand jury File information at preliminary hearing Formal arraignment; plead to charge: Guilty Not guilty Nolo contendere (No contest) Not saying anything; Is like a guilty plea but helps can’t be used against you in a civil case later 4/14/2017

12 History of Grand Jury Developed from English common law
Serves as a check on an arbitrary government Incorporated into the U.S. Constitution in the 5th Amendment Use of grand jury is declining: In 1961, more than half of the states required grand jury indictments 4/14/2017

14 Typical Grand Jury 16 to 23 members
Chosen at random from the community Must be at least 18 years old, U.S. citizen, a resident of the jurisdiction, and sufficient English-speaking skills Grand jury meetings: At the request of the prosecution Hearings are closed and secret Accused not allowed to attend unless called to testify 4/14/2017

15 Criticisms of Grand Jury
Costly operation A rubber stamp for the prosecution Delays the criminal justice process Suggested reforms: Witnesses should have attorneys present Prosecutors should present evidence for the defendant as well as incriminating evidence 4/14/2017

16 Plea bargaining Estimated that more than 90% of all convictions result form negotiated pleas Concessions offered by the prosecution: Reduction of initial charges Reduce number of charges Recommend a lenient sentence 4/14/2017 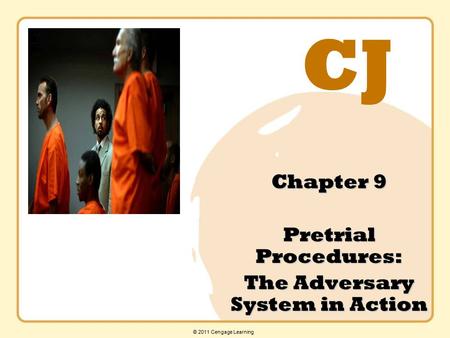 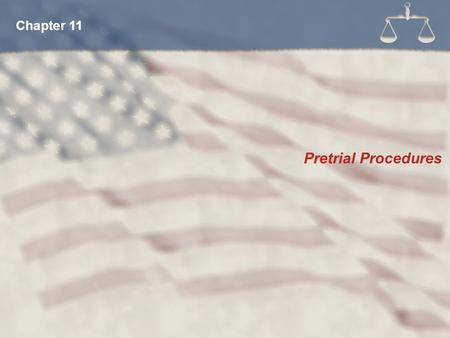