2 Label your paper like this!
Warm-Up /19/13 Directions: Answer the following questions on a clean sheet of paper. Be sure to write the questions. List as many uses for water as you can. You have 3 minutes!!!

5 Amounts and Uses of Resources
Consumption is the act of consuming, or using up goods and services. As the population of an area increases, the amount of goods consumed also increases. This can lead to numerous issues: Production – More materials have to be produced (made or refined; example: using oil to create gasoline). Abundance or Scarcity – As materials are used up, they may become more scarce (not enough of something). If there is an abundance of the materials (a lot of something) this is less of an immediate issue, but still could be an issue in the future.

6 Water Distribution One natural resource that is scarce in Southwest Asia (Middle East) is fresh water. The areas around fresh water sources, such as rivers, usually are densely populated ( a lot of people living close together in that area). People living in areas without access to enough fresh water have to find other ways to get water. One way, used by Saudi Arabia for example, is desalinization (process of removing salt from seawater for drinking), but this process is VERY expensive. Historically, many people in Southwest Asia (ME) have lived as desert nomads, or Bedouins, constantly moving to find water and other resources to survive. This lifestyle is slowly disappearing as Southwest Asia (ME) continues to become more modern. Because there is an unequal distribution of water in Southwest Asia (ME) this can lead to conflicts.

7 Population and Water Distribution – Where do most people live?

8 Population Distribution
Because most of the people in Southwest Asia (ME) live near water (rivers for fresh water or other waterways for shipping) these areas tend to be very crowded (have a high population density). This overpopulation (population has outgrown an area’s resources) leads to a scarcity of supplies. Example: So many people in Southwest Asia (ME) live close to rivers that there is a scarcity of water. Farmers diverting the river for irrigation (process of bringing water to land to assist in farming) leads to less water available to other people. As a result, since many of the rivers have less water in them, the silt (small particles of rich soil carried by flooding rivers) which naturally fertilized the fields when flooding occurred never reaches the soil. Without the flooding and silt, many fields are becoming unable to produce crops.

9 Oil Production While many of the people of Southwest Asia (ME) live near fresh water, there are still other areas with high population densities. One example is areas with large oil reserves. These areas tend to have a large number of high paying jobs and attract people from all over Southwest Asia (ME). Because there is an uneven distribution of oil in Southwest Asia (ME), some countries have become increasingly wealthy, while others have remained poor.

11 Oil Production in Southwest Asia (ME)
The countries of Saudi Arabia, Iran, United Arab Emirates (UAE), Kuwait, and Iraq all have significant oil reserves and production, while many of the other countries in Southwest Asia (ME) do not. The Organization of Petroleum Exporting Countries (OPEC) is an intergovernmental organization, consisting of 12 oil producing and exporting countries; it regulates the supply (amount) and cost of oil in the world market. Saudi Arabia, Iran, UAE, Kuwait, and Iraq are all members of OPEC.

12 GDP and Standard of Living
Gross Domestic Product – The total market value of all final goods and services produced in a country in a year. Gross Domestic Product Per Capita (GDP per capita) – The approximate value of goods produced per person in a country; equal to the country’s GDP divided by the total population. This is often times used to show the standard of living in a country. Standard of Living – The financial health of a individual, group (population), or nation measured by how much that individual, group, or nation consumes. Countries with a high GDP per capita are said to have a higher standard of living since the country (and individuals within the country) are making more money. Governments can provide more, and better services and people have more money to buy what they need. 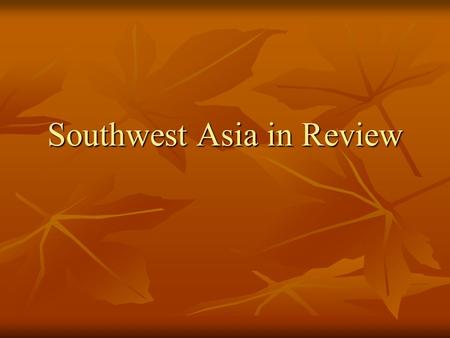 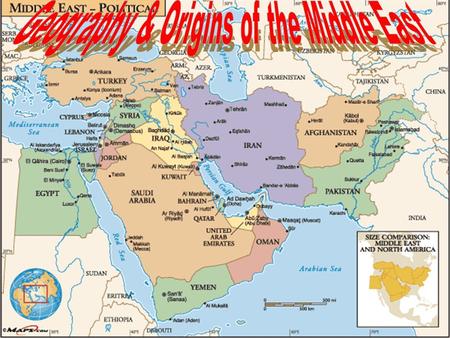 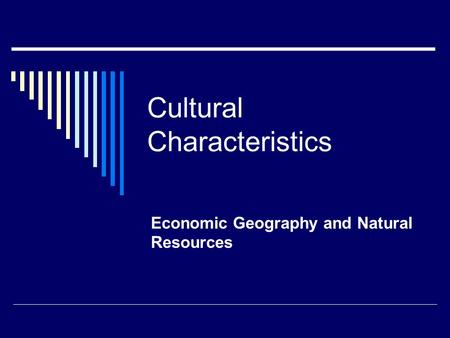 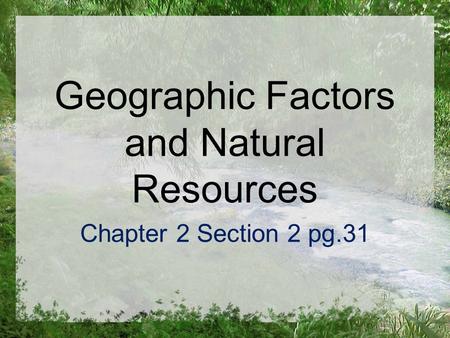 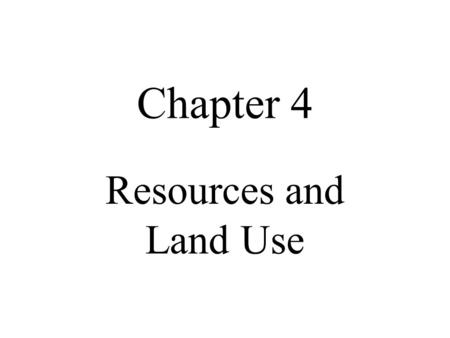 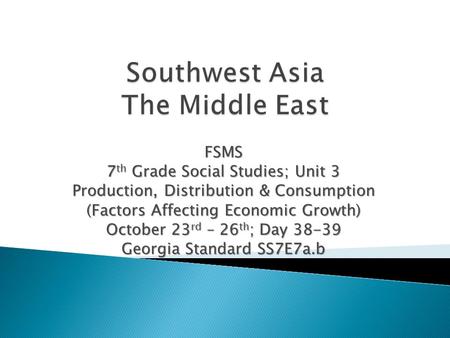 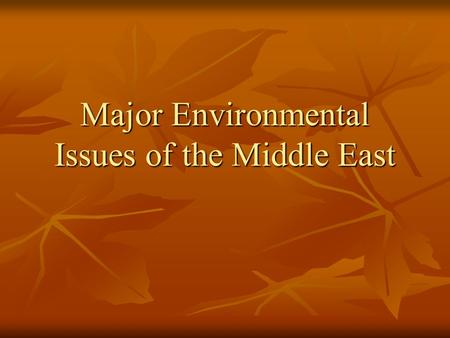 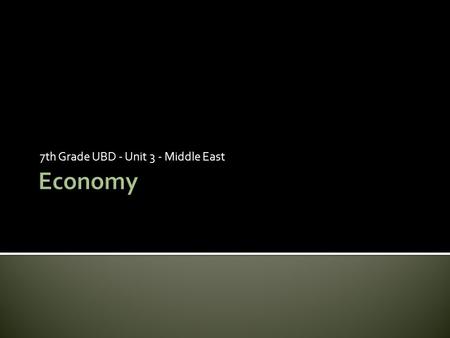 7th Grade UBD - Unit 3 - Middle East.  Work alone to complete a list of facts you know about Southwest Asia. You should come up with a list of at least. 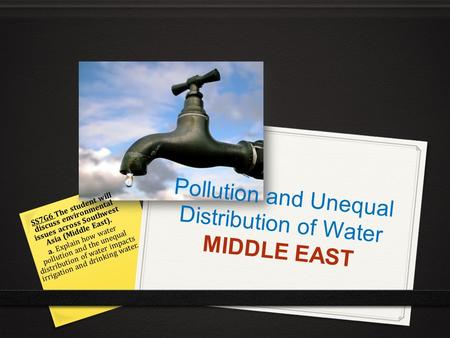 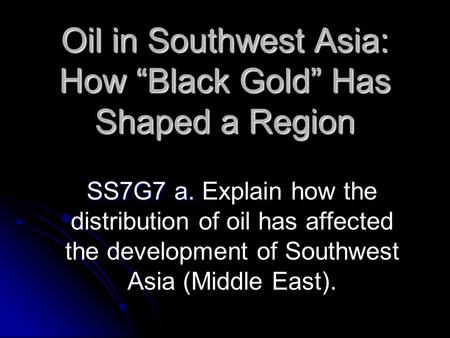 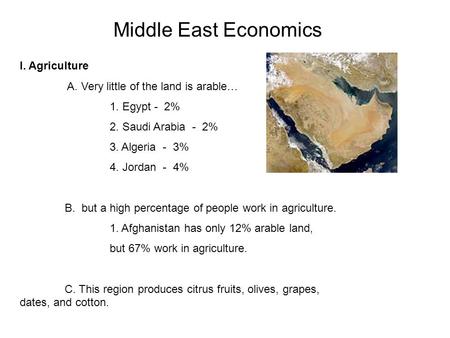 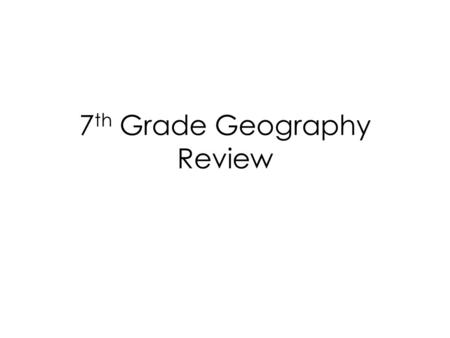 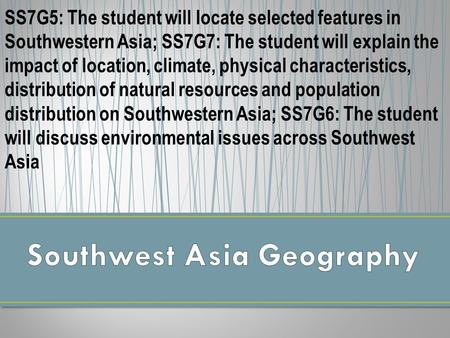 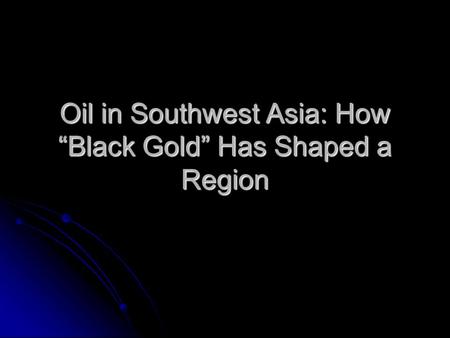 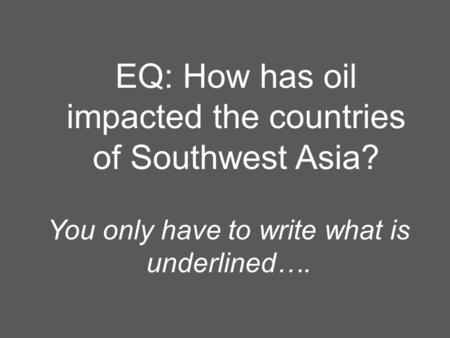 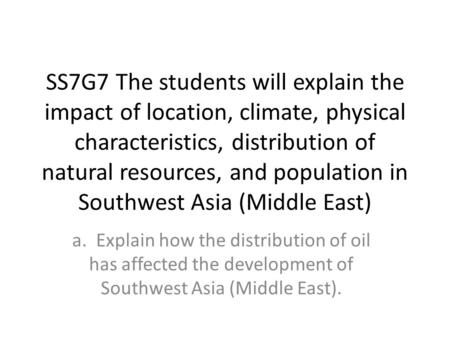 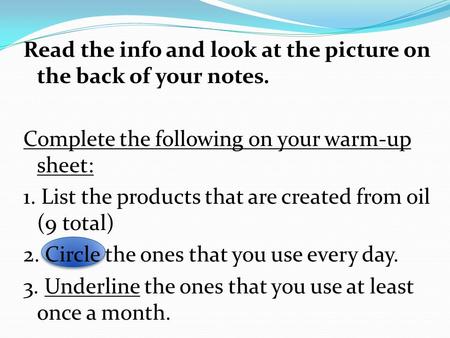