1 The Nominating Process
Nomination- the first step in the process of candidate selection; naming the candidate who will seek office. General Elections- regularly scheduled elections at which voters make the final selection of officeholders. There are 5 ways in which nominations are made in the United States: Self-Announcement Caucus Convention Direct primary petition

2 The Nominating Process
Self Announcement Oldest and simplest way in the nomination process. A person who wants to run for office simply announces that fact. When would self-announcement be used? 2. Caucus- a group of people who meet to select candidates they will support in an upcoming election. Used in the early periods of United States history. Usually the caucus nominating process was completed by the legislative and congressional caucuses. Caucus at the national level ended with the election of 1824.

3 The Nominating Process
3. The Convention The convention nominating process begins with local officials who nominate a candidate to attend the next rung on the convention ladder. This process repeats itself until it reaches the State convention, where the nominees pick candidates for governor and other state offices. The state convention also sends delegates to the party’s national convention. This process, however, became easily manipulated at the state level and is rarely used today.

4 The Nominating Process
4. The Direct Primary- an intra-party election. Most states use this process today. Two basic forms of the direct primary are in use today: Closed Primary- a party’s nominating election in which only declared party members can vote (24 states). b. Open Primary- a party’s nominating election in which any qualified voter can cast a ballot (26 states). -Another version of the open primary is the blanket primary where every voter was handed one ballot with a long list of all the candidates for every nomination to be made at the primary.

5 The Nominating Process
5. Petition Nomination by petition is used rather widely at the local level. Candidates are nominated by means of petitions signed by a certain number of qualified voters in the election district. This process is used for nominating minor party and independent candidates. -Why would they have to use this process?

6 Elections Election Day for State offices is often held on the same day Congress has set for national elections. -The “Tuesday after the first Monday” in November of even numbered years. Absentee Voting: a process by which voters can vote without actually going to their polling places. Precincts and Polling Places -Precinct is the smallest unit for the conduct of elections. -Polling Places are the places in which people living in a precinct actually go to vote.

7 Ballots Ballot- the device by which a voter marks their choice in an election. Australian Ballot- 1) It is printed at public expense. 2) It lists all names of candidates in an election. 3) It is given out only at the polls, one to each voter. 4) It is marked in secret. *This is the basic form of the ballot in America today* Other Types of Ballots include: -The Office Group Ballot The Party Column Ballot Sample Ballots Bedsheet Ballots (primarily where you see ballot fatigue) 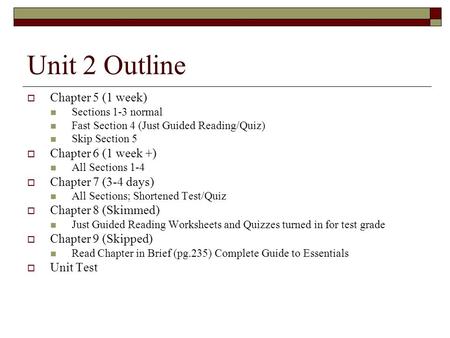 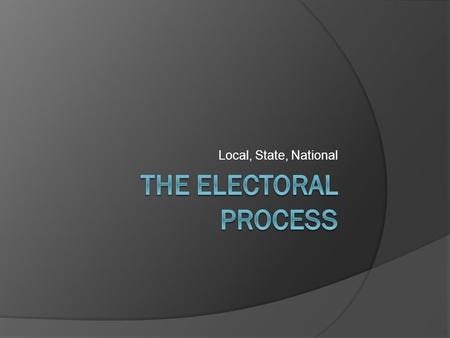 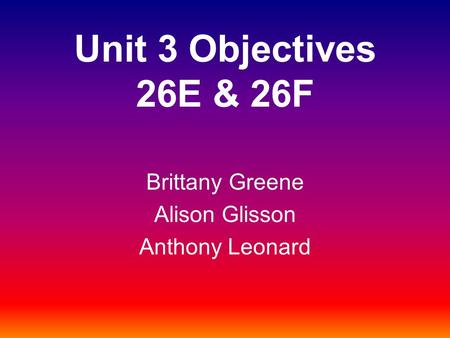 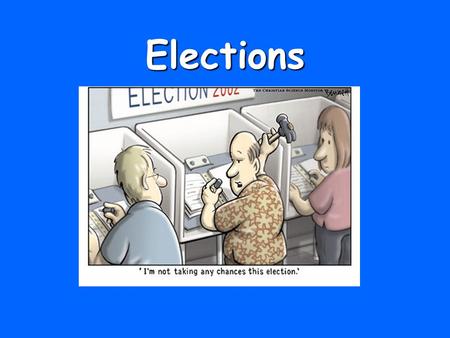 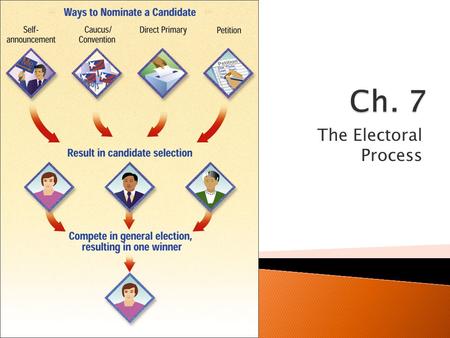