1 The Declaration of Independence
A simplified version

2 Part 1:The Preamble or Introduction
A preamble is an introduction. The writer explains his or her reasons for writing the letter or essay. Jefferson uses the preamble to introduce his argument for independence from England.

3 Jefferson says: It has become necessary for the 13 colonies to separate from Great Britain. These 13 colonies have the right to become a nation as legitimate as any other nation. Additionally, it is important to explain to the public, including those in other nations, why this declaration of independence is being made.

4 Part 2: Statement of Beliefs
To begin his argument, Jefferson describes what a government SHOULD be and how a government should behave. He does this to show the difference between what the colonists consider good government and the government forced on them by King George.

5 Jefferson states: First :
This declaration is based on certain truths. All men are meant to be equal and to have certain rights ("unalienable rights") that the government should never take away. These rights include "life, liberty and the pursuit of happiness.“

7 Third: Governments should not be overthrown for trivial reasons; it is not typical for people to change a system that they are accustomed to. However, when the people have suffered many abuses under the control of a totalitarian leader, they not only have the right but the duty to overthrow that government.

8 Part 3: List of Complaints
This is the longest section of the Declaration. In it, Jefferson lists all of the grievances (or complaints) against King George III. There are 27 grievances.

9 Jefferson Complains: He (King George) has refused to agree to laws that were necessary for the good of the colonists and he neglected us when we had important matters that needed his attention.

10 He has met with Parliament in places too far away for us to attend.
He has made us quit having our own meetings if we disagreed with him. After getting rid of the governors we elected, he took his time about appointing new governors. This left us without laws or order.

11 He has kept among us, in times of peace, Standing Armies without the Consent of our legislatures.
He has made the Military independent of and superior to the Civil power.

12 He has allowed Parliament – in which we have no say – the power to:
Quartering large bodies of armed troops among us: Protected criminals who have murdered us with fake trials Cut off our Trade with all parts of the world: Impose Taxes on us without our Consent: Deprive us in many cases, of the benefits of Trial by Jury: Transport us beyond Seas to be tried for pretended offences

13 He has tried to keep us from growing in population by refusing people the right to immigrate to the colonies and by refusing to allow people to become citizens. He has not allowed us to establish a court system that would guarantee us the right to a fair trial. He has sent officers and troops to the colonies to harass us and to eat us out of house and home.

14 He has declared us out of his Protection and waged War against us.
He has plundered our seas, ravaged our Coasts, burnt our towns, and destroyed the lives of our people. He is at this time transporting large Armies of foreign Mercenaries to complete the works of death, desolation and tyranny, already begun with circumstances of Cruelty scarcely paralleled in the most barbarous ages, and totally unworthy the Head of a civilized nation.

15 He has kidnapped American sailors and forced them to fight against their own friends and neighbors.
He has stirred up fights among the colonists, and has tried to use the merciless Indian Savages against our colonists in the backcountry.

16 Part 4: Past Actions of Colonists
In this section, Jefferson describes the actions taken by the colonists to try and keep peace with England. He claims that the colonists used peaceful means such as petitions and letters to try and convince King George of his wrongdoings, but that he ignored them.

17 Jefferson explains: Up until this declaration, colonists have used non-violent means, such as petitions, to protest the abuses of King George III. Each attempt to request peaceful negotiations was met by neglect and more abuse.

18 Additionally, colonists tried to appeal to Parliament and other British citizens for help. These attempts were ignored. Colonists appealed to British citizens' sense of justice, to their shared heritage and culture, and to their economic connection. These attempts failed, however, and the colonies have no other choice but to declare separation. In doing so, the new separate nation will view British citizens as enemies during wartime, and as friends in peacetime.

19 Part 5: Declaration of Independence
This section of the Declaration tells exactly what the colonists intend to do. They are separating from England and will from now on consider themselves an independent country. 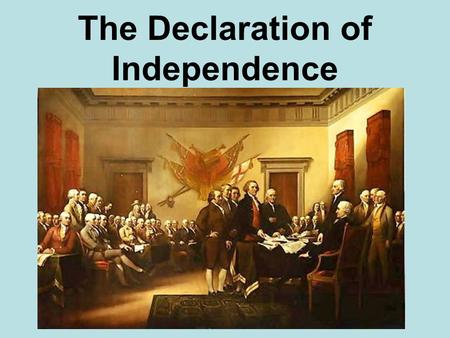 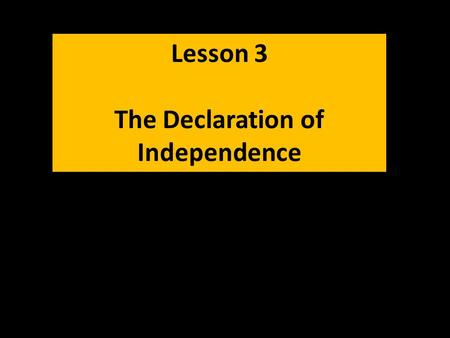 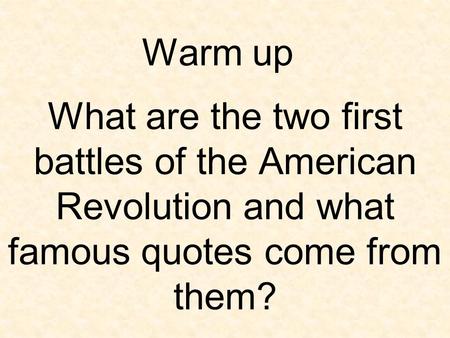 Warm up What are the two first battles of the American Revolution and what famous quotes come from them? 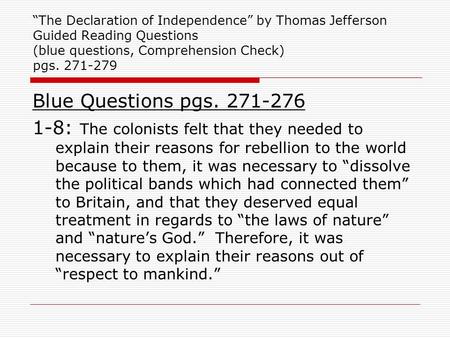 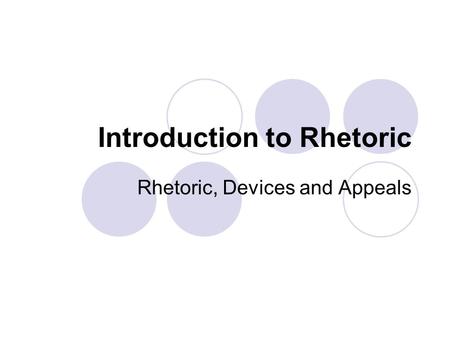 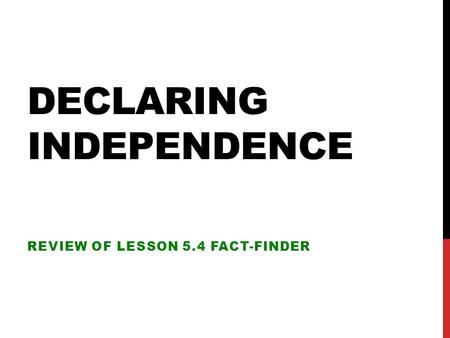 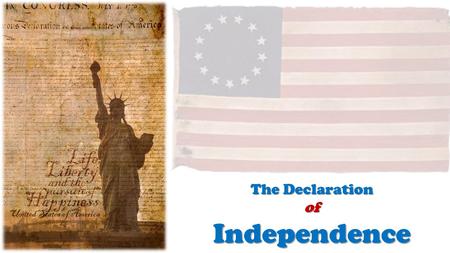 The Declaration of Independence. 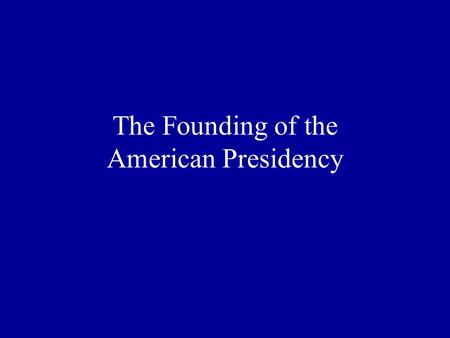 The Founding of the American Presidency Please discuss in small groups: If you were designing a new government, what powers would you give the executive. 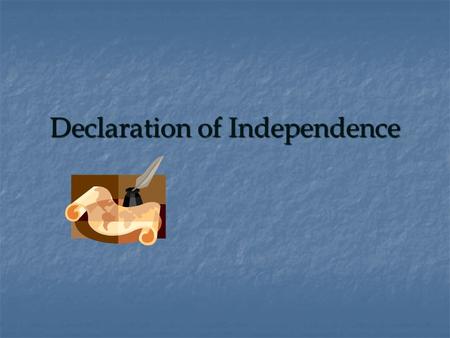 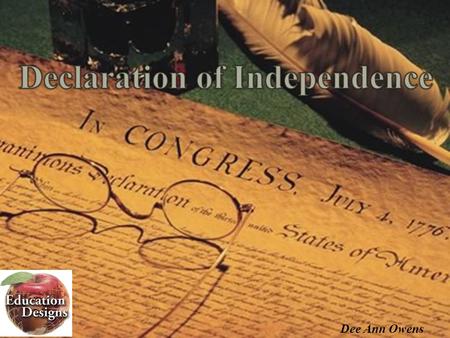 Dee Ann Owens. Imagine- You are an adult and live in your own apartment in your mother’s house… 1. She takes half of your paycheck every week 2. She tells. 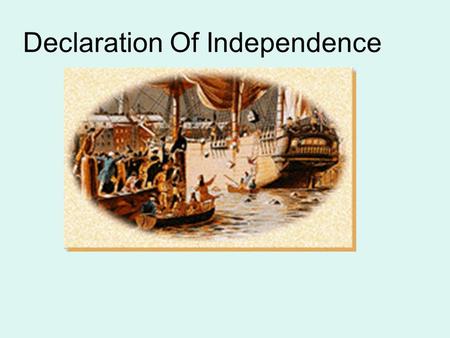 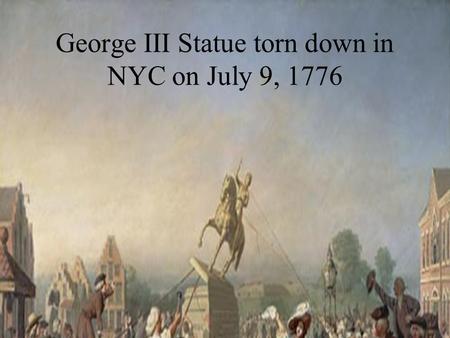 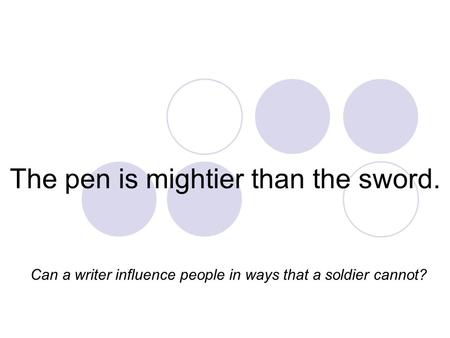 The pen is mightier than the sword. 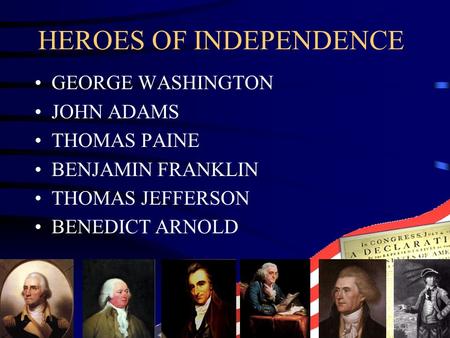 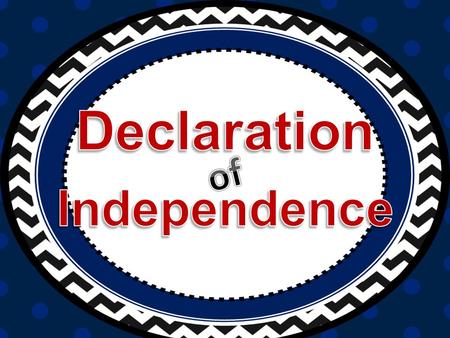 Congress asked Thomas Jefferson to write a declaration, or announcement, explaining why the colonies needed to break away from Britain. Jefferson argued. 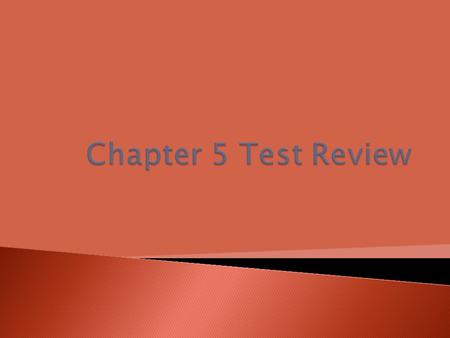 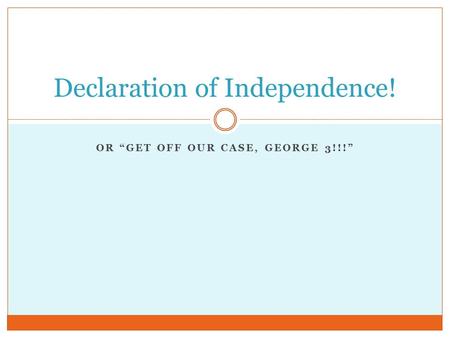 OR “GET OFF OUR CASE, GEORGE 3!!!” Declaration of Independence! 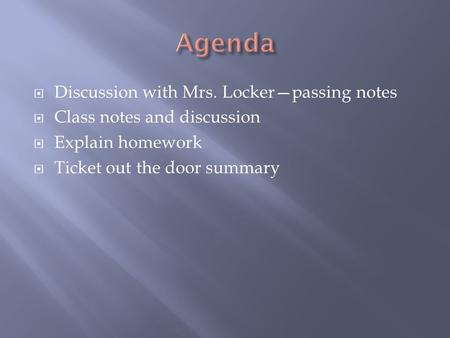 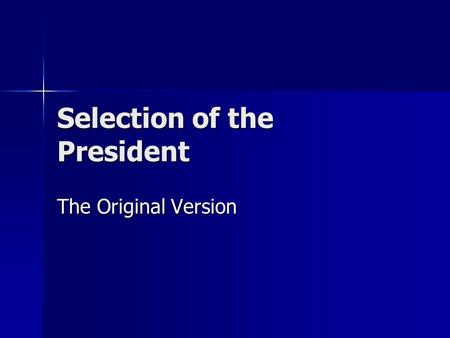 Selection of the President The Original Version. If you were to start from scratch designing a presidency today, how would you elect a president? Why? 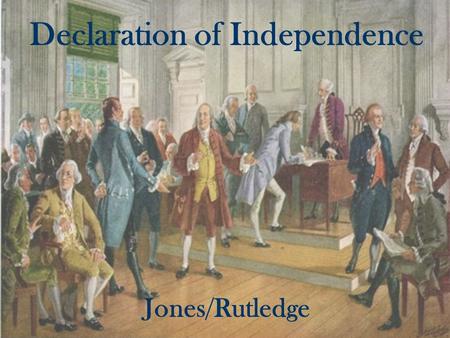 Declaration of Independence Jones/Rutledge. Preamble Excerpt 1 “When in the Course of human events it becomes necessary for one people to dissolve the.