3 Gross Domestic Product (GDP)
Gross domestic product (GDP) is the total market value of final goods and services produced within a nation’s borders in a given time period. (Usually a year)

4 Gross Domestic Product
Total Market Value means the dollar value of every one of the good or service produced during the period of time. Final goods and service means that production is only counted in the final stage. This is to keep things such as a car’s engine from being counted twice.

6 GDP Versus GNP GDP is geographically focused, including all output produced within a nation’s borders regardless of whose factors of production are used to produce it. Japanese companies producing in America count, but not American companies abroad.

7 GDP per Capita GDP per capita is total GDP divided by total population–average GDP. GDP per capita is commonly used as a measure of a country’s standard of living. However, it is not always an accurate measure.

9 Non-Market Activities
GDP measures exclude most goods and services produced that are not sold in the market. A homemaker who cleans, washes, gardens, shops and cooks produces goods of value. Because they are not exchanged in the market they are not included in GDP.

10 Unreported Income The GDP statistics fail to capture market activities that are not reported to tax or census authorities. The underground economy is motivated by tax avoidance or to conceal illegal activities.

12 Value Added Value added is the increase in the market value of a product that takes place at each stage of the production process.

14 Two Ways to Calculate GDP
Compute the value of the final output. Count only the value added at each stage of production.

16 Computing Real GDP The base period is the time period used for comparative analysis. From this base year, we find the GDP deflator for other years. The GDP deflator is a measure of price changes over time.

19 Net Domestic Product Changes in real GDP tell us how much the economy’s output is growing. Growth is at the expense of future output unless factors of production are replaced.

20 Net Domestic Product Depreciation is the consumption of capital in the production process — the wearing out of plant and equipment.

22 Net Domestic Product Investment is spending on (production of) new plant, equipment, and structures (capital) in a given time period, plus changes in business inventories. The distinction between GDP and NDP is mirrored in the difference between gross investment and net investment.

24 Net Domestic Product The stock of capital — the total collection of plant and equipment — will not grow unless gross investment exceeds depreciation.

25 The Uses of Output The GDP accounts also tell us what mix of output has been selected, that is, society’s answer to the core issue of WHAT to produce.

26 The Uses of Output The major uses of total output conform to the four sets of market participants: consumers, business firms, government, and foreigners.

29 Government Spending Resources purchased by the government sector are unavailable for consumption or investment purposes.

35 National Income By charting the flow of income through the economy, we see FOR WHOM the output is produced.

37 Net Foreign Factor Income
Wages, interest, and profits paid to foreigners are not part of U.S. income. They need to be subtracted from the income flow.

38 Net Foreign Factor Income
Incomes earned by U.S. citizens in other nations represents an inflow of income to U.S. households and are added.

39 National Income Once depreciation charges and indirect business taxes are subtracted from GDP and net foreign income is added, we have national income.

45 The Flow of Income 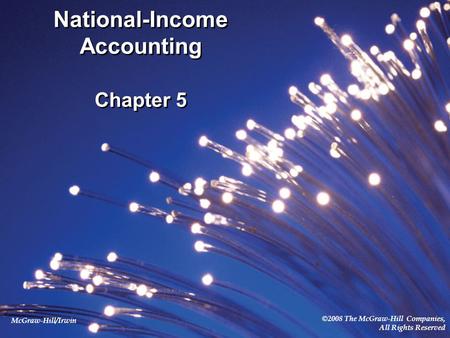 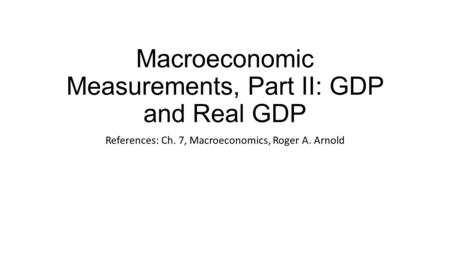 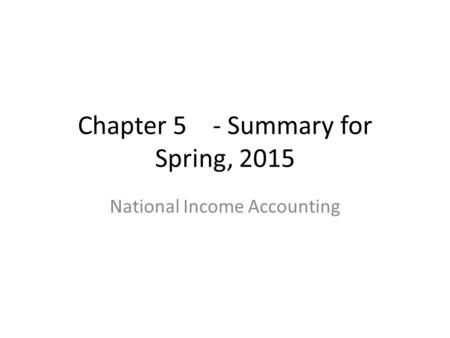 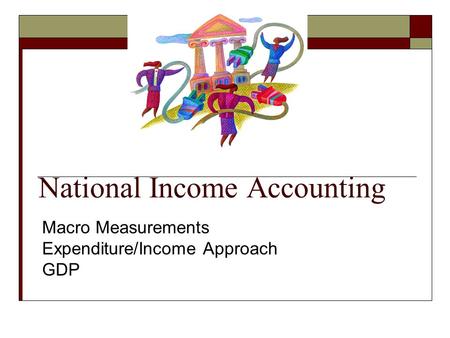