4 Successes of the Articles Ordinance of 1785: Created a way to survey and sell western lands Northwest Ordinance: established a way to govern newly acquired lands and a path towards statehood Banned slavery or involuntary servitude in new territories

6 Crisis in Government War is over country is in debt States taxed heavily to try and cover debt Shays rebellion: Daniel Shays revolts against Massachusetts government Congress authorized a convention to “revise the Articles of Confederation”

7 Constitutional Convention On February 21, 1787, the Continental Congress resolved that:...it is expedient that on the second Monday in May next a Convention of delegates who shall have been appointed by the several States be held at Philladelphia for the sole and express purpose of revising the Articles of Confederation...

9 About the Delegates 4/5 were members of Congress, others were governors Predominantly Protestant Farmers, businessman, lawyers It is said they were well read, well bred, well fed and well wed James Madison (VA) is known as the father of the Constitution, he took notes of the proceedings

11 3/5ths Compromise Southern States wanted to count slaves in their population North said “no”-slaves could not vote or participate in the political process-they were property Compromise: every five slaves would be considered 3 free persons

12 North/South Compromise North wanted congress to regulate foreign and domestic trade South feared it would have economic impact on their export driven economy Also feared Congress would stop slave trade Compromise: North would not tax exports nor interfere with slave trade until 1808

14 Structure of the Constitution Provides a framework for our government and serves as the highest legal authority in the country 3 Main Parts: Preamble, Articles and Amendments

18 Main Principles in the Constitution Popular Sovereignty: the people have the right to rule. Rule of Law/Limited Government: Government can only do what people allow it to do. Laws are applied equally Separation of Powers: Divided powers to prevent abuse/ Montesquieu Checks and Balances:

19 Main Principles in the Constitution Federalism: Shared powers between national and state Power: the ability to get someone to do something they would not normally do Republicanism: We choose our Reps Individual Rights: Big debate the fear was that the government would become too strong. Immediately after adoption, there was a push to amend the Constitution to include individual rights- “Bill of Rights” 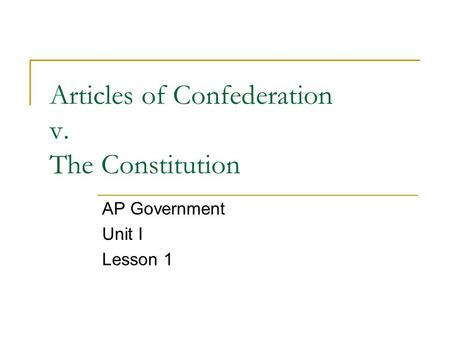 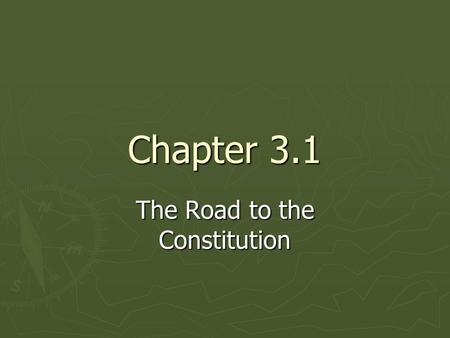 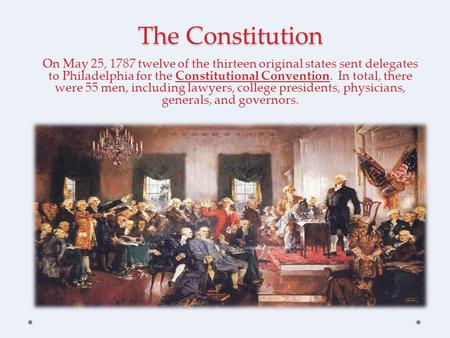 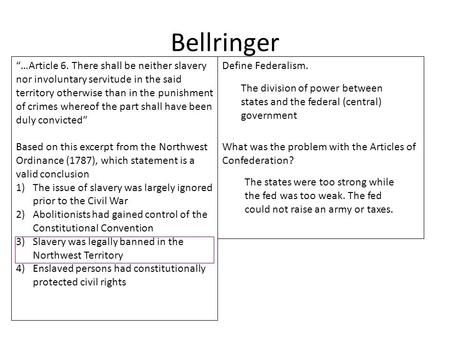 Bellringer “…Article 6. There shall be neither slavery nor involuntary servitude in the said territory otherwise than in the punishment of crimes whereof.