7 Understanding the Importance of Computers
The computer is one of the most important inventions of the past century. You find computers and computer technology everywhere throughout society—from businesses and financial organizations, to home electronics and appliances, to personal applications such as clothing embedded with iPod controls. 7 7

8 Understanding the Importance of Computers (continued)
A Brief History of the Computer: The first computers were developed in the late 1940s and early 1950s for use by the military and government. In 1971, Dr. Ted Hoff developed the microprocessor. The first Apple computer was built in The IBM PC was introduced in 1981. 8 8

10 Defining Computers and Computer Systems (continued)
The actual machine—wires, transistors, and circuits—is called hardware. Software consists of instructions or programs for controlling the computer. Data is text, numbers, sound, images, or video. The computer receives data through an input device, process the data, produces the output (or information), and stores the data and information on a storage device. 10 10

14 Identifying System Components
The motherboard is a circuit board that contains integral components—central processing unit, memory, connectors, and expansion ports and slots. 14 14

15 Identifying System Components (continued)
The Central Processing Unit: The central processing unit (CPU) is the brains of the computer. The CPU has two primary sections: the arithmetic/logic unit and the control unit. Microprocessor 15 15

16 Identifying System Components (continued)
The Arithmetic/Logic Unit: The arithmetic/logic unit (ALU) performs arithmetic computations and logical operations. The Control Unit: The control unit coordinates all of the processor’s activities. You communicate with the computer through programming languages. The computer uses machine language, or binary code, which contains only 1s and 0s. 16 16

17 Identifying System Components (continued)
Recognizing How a Computer Represents Data: In machine language, the control unit sends out necessary messages to execute the instructions. A single zero or a single one is a bit. A byte is a single character. 17 17

18 Identifying System Components (continued)
Memory: Memory is where data is stored on the motherboard. Memory can be short term or long term. When you want to store a file or information permanently, you use secondary storage devices such as the computer’s hard drive or a USB drive. You might think of this as long term memory. 18 18

19 Identifying System Components (continued)
Random Access Memory: The memory on the motherboard is short term, called random access memory (RAM). Data, information, and program instructions are stored temporarily on a RAM chip and disappear when the computer is turned off. 19 19

22 Identifying System Components (continued)
Random Access Memory (cont): For every instruction, a processor repeats a set of four basic operations, which compose a machine cycle: Fetching is the process of obtaining a program instruction or data item from RAM Decoding refers to the process of translating the instruction into signals the computer can execute. Executing is the process of carrying out the commands. Storing, in this context, means writing the result to memory (not to a storage medium). 22 22

24 Identifying System Components (continued)
Read-Only Memory: Another type of memory found on the motherboard is read-only memory (ROM). ROM chips store specific instructions that are needed for computer operations. These instructions remain on the chip even when the power is turned off. The more common of these is the BIOS ROM, containing instructions to start the system when you turn on the computer. 24 24

25 Identifying Types of Storage Devices
To keep a permanent copy of data, you must store it on a storage device. Magnetic Storage Devices: Data is stored in numbered tracks in a special log on the disk called a file allocation table (FAT). Hard Disks: Advantages: speed and capacity 25 25

28 Identifying Types of Storage Devices (continued)
Network Drives: Hard drive or tape drive connected to a network server and is available to and shared by multiple users. Remote storage is used to extend disk space on a server and to eliminate the addition of more hard disks or other storage devices. 28

29 Caring for Storage Media
Keep away from magnetic fields. Avoid extreme temperatures. Remove media from drives and store them properly when not in use. When handling DVDs and other optical discs, hold them at the edges. Never try to remove the media from a drive when the drive indicator light is on. Keep discs in a sturdy case when transporting. 29 29

30 Exploring Computers in Your Future
A major focus of new types of computers is connectivity, or the ability to connect with other computers. Wireless and mobile devices are now as common as wired desktop machines. Computer literacy, which is the knowledge and understanding of computers and their uses, will become even more important. 30 30

31 Summary 31 31 In this lesson, you learned:
A computer is an electronic device that receives data, processes data, produces information, and stores the data and information. A computer derives its power from its speed, reliability, accuracy, storage, and communications capability. Computer classifications include personal computers (desktop and notebook), mobile devices, servers, mainframes, and supercomputers. 31 31

32 Summary (continued) Almost all computers perform the same general functions: input, processing, output, and storage. Input, output, and processing devices grouped together represent a computer system. The machine cycle is made up of the instruction cycle and the execution cycle. The motherboard is the center of all processing. It contains the central processing unit (CPU), memory, and basic controllers for the system. It also contains ports and expansion slots. 32 32

34 Summary (continued) The CPU is the brains of the computer. The CPU has two main sections—the arithmetic/logic unit (ALU) and the control unit. All calculations and comparisons take place in the ALU. The control unit coordinates the CPU activities. To maintain a permanent copy of data, you should store it on some type of storage medium. The three categories of storage media are magnetic storage, optical storage, and solid-state storage. 34 34 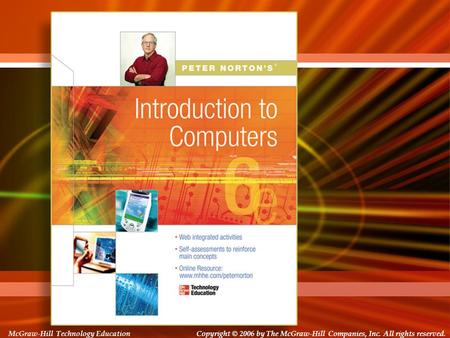 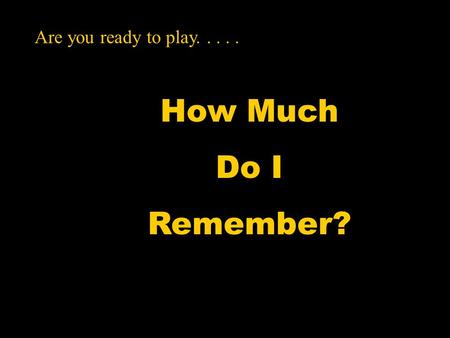 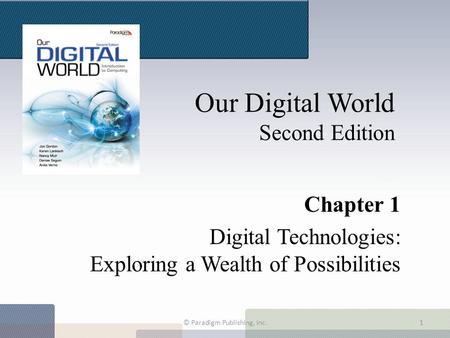 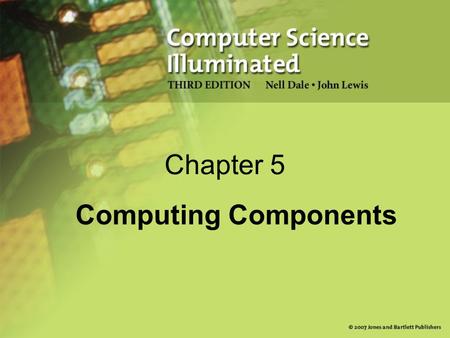 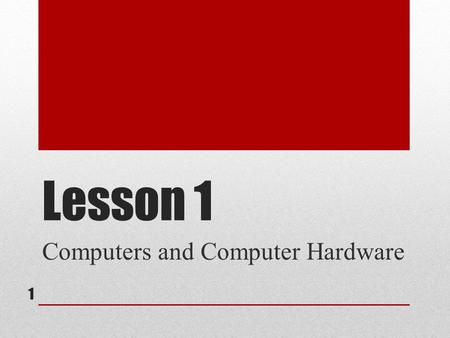 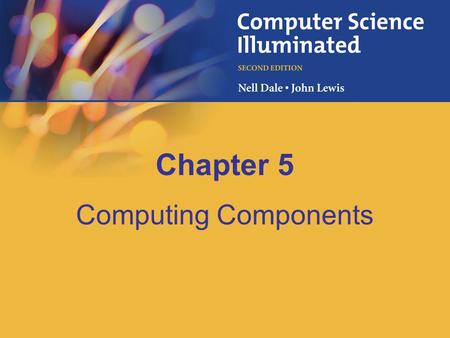 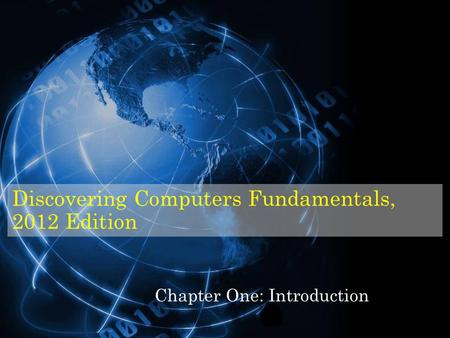 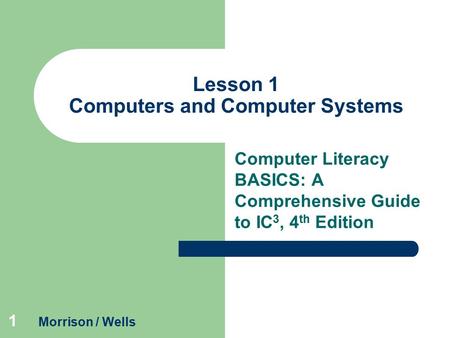 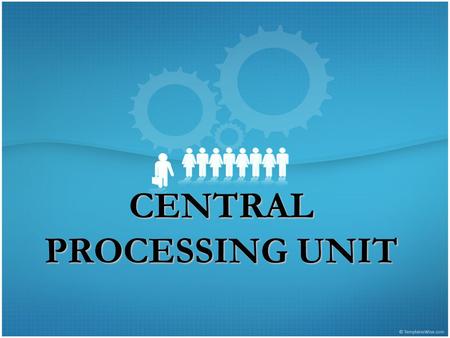 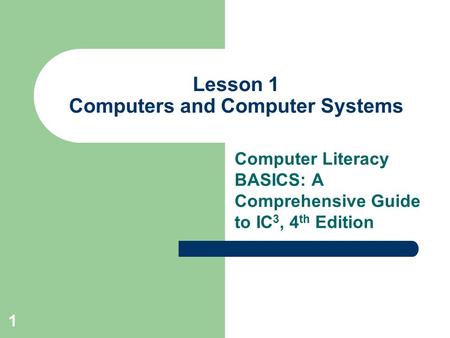 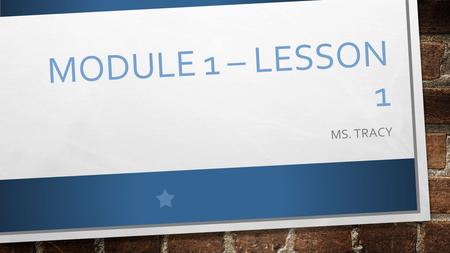 MODULE 1 – LESSON 1 MS. TRACY. BELL RINGER WHAT IS THE PURPOSE OF THE CENTRAL PROCESSING UNIT? 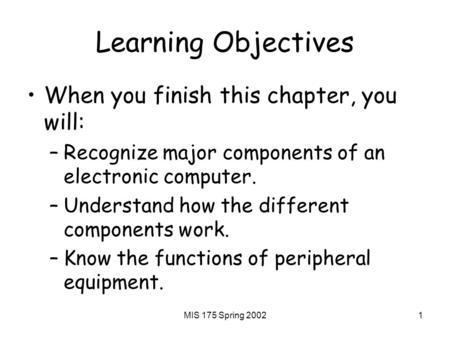