Struggling to stay in: Protecting residents from facility evictions

3 What’s the Big Deal About Involuntary Discharges?
Studies demonstrate increased morbidity and mortality when residents are forced to leave. Residents may be moved farther away from loved ones and/or to lower quality facilities Families and residents often feel bullied, helpless, stressed, and devalued when required to leave. Best options, including home and community based care, are rarely considered Like tenants facing evictions, residents need representation to fight discharges/rights violations!

7 Current Law… Only 6 legitimate reasons for discharge:
Necessary to meet the resident’s welfare Resident no longer needs NH care Safety of others endangered by resident Health of others endangered by resident Resident fails to pay for stay Facility closes See 42 C.F.R. § ; New regs -- most of which will be effective on 11/28/16 – will be found at 42 C.F.R Documentation requirements regarding discharge will be effective 11/28/17.

8 What’s Changed? Same 6 justifications for discharge, but some change in wording: “Safety of others” justification is now limited to endangerment “due to the clinical or behavioral status of the resident.” Nonpayment does not occur if the resident has submitted the necessary paperwork for third party reimbursement.

9 Notice Requirements Timing of notice: generally at least 30 days before d/c Exceptions: Resident’s welfare/urgent medical needs necessitate more timely transfer Resident is a danger to others’ health and safety Resident has improved to the extent he or she no longer needs NH care Resident has been in facility fewer than 30 days

10 More Notice Requirements
Given to resident and, if known, family member or legal representative Must be in a language resident/rep. can understand Must give reason for discharge Must identify location to which resident will be sent and date on which discharge will occur Must include info on how to appeal Must include info on SLTCOP and Protection & Advocacy agency

11 What’s Changed: More Focus on Claims that Facility Cannot Meet Resident’s Needs
Specific documentation required if transfer/discharge “is necessary for the resident’s welfare and the resident’s needs cannot be met in the facility.” Medical record must include: “Specific resident need(s) that cannot be met”; “Facility attempts to meet the resident needs”; and “Service available at the receiving facility to meet the need(s).” Also note requirement that, pre-admission, facility provide “notice of special characteristics or service limitations.”

12 Some New Protections No transfer/discharge while appeal is pending, absent documented endangerment to health or safety of resident or others. Facility must send copy of transfer/discharge notice to long-term care ombudsman program. If information on notice changes after issuance, facility must update resident

13 Returning to Facility Facility must give notice of bed-hold policy.
Facility also must allow return to next available bed in a semi-private room. New: Must be previous room if available.

14 Preventing Residents from Being “Dumped” in Hospitals
If facility determines resident “cannot return to the facility,” facility must comply with transfer/discharge regulations “as they apply to discharges.” This is cross-reference to section that begins with statement that “before a facility transfers or discharges a resident,” facility must provide advance notice in manner required by regulations. CMS states that it has made revisions “to better address concerns that [the initially-proposed language] would allow patient dumping.”

15 Improper Justifications
Resident is disruptive, argumentative, and/or obnoxious. Resident does not follow facility policies or care plan; is “non-compliant.” Caring for resident is too burdensome or expensive. Facility is exposed to potential legal liability for injuries suffered or caused by resident.

17 And More … Resident has exhausted savings; now is Medicaid eligible.
Depends on whether state allows partial Medicaid certification. Resident’s Medicaid application is in process; facility has not been paid. Facility has voluntarily withdrawn from Medicaid program.

20 Practical tips… Advise clients and families not to be bullied or shamed into agreeing to discharge the resident opposes or devising discharge plan. Does receiving facility know why the resident is being discharged? If not, resident may become a victim of serial discharges. Once new facility knows about non-payment or behavior issues, it may not be willing to accept resident. Resident can stay at current facility unless and until an adequate discharge plan is available. For non-payment, facilities may allow resident to remain if offered modest payment plan; discharge notice may be intended as a wake up call to family. May be state law Medicaid provision to allow resident to apply patient pay amount to back bill or retroactive Medicaid coverage to cover unpaid period. Does resident want to move to less restrictive setting? If so, will nursing home work with you to allow time for an appropriate discharge?

24 Eviction Protections in HCBS Settings (Assisted Living)
Lease or other legally enforceable written agreement for the specific living unit owned, rented, or occupied by the resident is in place Eviction protections in provider-controlled settings must be at least as good as those in landlord/tenant law At a minimum – must address eviction processes and appeals

26 Mr. Bernstein has resided at Sunshine County Home for 2 years
Mr. Bernstein has resided at Sunshine County Home for 2 years. He is 81, a wheelchair user, is paralyzed on one side with very limited mobility on the other, and has a host of medical problems. He cannot move his wheelchair without assistance. Although he appears cognitively intact, his family reports that since his stroke, he has reduced inhibitions. Mr. Bernstein frequently makes off-color or sexually inappropriate comments to the nursing staff. On one occasion in June of this year, as a nursing assistant leaned over him to provide care, he briefly put his hand on the outside of her clothing over her breast. The nursing facility took no action initially and continued to assign the same caregiver to assist Mr. Bernstein. However, after he filed a complaint about his care with the state in August, the facility issued an involuntary discharge notice asserting that his sexual remarks and his groping of the nursing assistant made him a danger to staff in the facility. As soon as the facility’s lawyer became involved, the facility assigned a male staff member to care for Mr. Bernstein and the lawyer threatened to seek criminal penalties for Mr. Bernstein’s alleged sexual assault if Mr. Bernstein pursued his appeal of the involuntary discharge.

27 Mr. Cummings resided in a nursing home for rehabilitation after his leg was amputated. He had previously been homeless for a period of time and was forced to live in his truck during this time. During his three month stay at the facility, Mr. Cummings, who feared he might be homeless again in the future, chose to use his limited income to make payments on his truck instead of paying his patient pay amount. The facility issued an involuntary discharge notice for non-payment. Mr. Cummings appealed and lost. The facility, with the approval of the State licensing agency, planned to transport Mr. Cummings to a local homeless shelter despite the fact that a safe, subsidized apartment was going to become available for him two weeks after the date the facility planned to discharge him. The director of the homeless shelter insisted that it could not meet his needs and did not have an available bed. The state licensing agency then directed the facility to roll Mr. Cummings to the parking lot so that he could be discharged to his truck. Mr. Cummings had no money at all, no food, no way to refrigerate his insulin, no driver’s license, and no place to park. The state explained that: 1) Mr. Cummings should have thought of the consequences of his actions when he chose to pay for his truck rather than the nursing home; 2) that he was homeless before so he could be homeless again; and 3) the state had no obligation to ensure a safe discharge because Mr. Cummings no longer required “skilled care.”

28 Ms. Jennings was a morbidly obese middle aged wheelchair user with a history of alcohol abuse. She and three other younger residents resided in a nursing home where they often enjoyed drinking together. The facility issued involuntary discharge notices to all four residents, alleging that they failed to follow facility policies about drinking only at facility sponsored happy hours, that their sometimes boisterous gatherings were a danger to other residents, and that the facility could not meet their needs because neither of the facility attending physicians were willing to continue treat the non-compliant residents. The facility planned to send Ms. Jennings to her former home which had been destroyed by a fire and was uninhabitable and had issued discharge notices to the other residents asserting that the location to which they would be discharged was “to be determined.” The facility administrator told the ombudsman for the facility that he had to get rid of “a bunch of drunks” and he was looking forward to when the facility would have enough open beds to create a vent unit.

29 Mr. Ramos entered the assisted living facility with a diagnosis of dementia.  He also had some physical limitations and needed some assistance with dressing and using the toilet.  It is now two years later, and the assisted living facility is moving to evict Mr. Ramos based on their allegations that they no longer can meet his needs (which is one of the grounds for eviction in the state regulations).  He is unsteady in walking, and is more likely to forget about mealtimes and other scheduled activities.  The facility claims that he should be transferred to a dementia facility. 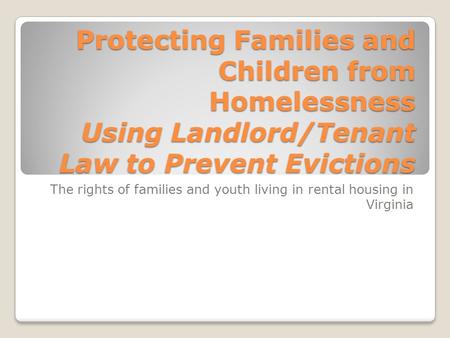 The rights of families and youth living in rental housing in Virginia Protecting Families and Children from Homelessness Using Landlord/Tenant Law to Prevent. 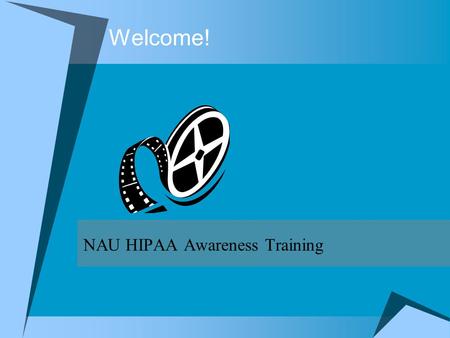 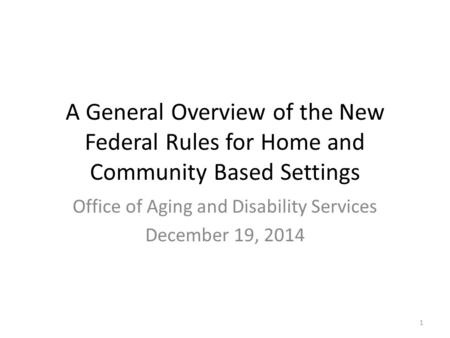 A General Overview of the New Federal Rules for Home and Community Based Settings Office of Aging and Disability Services December 19, 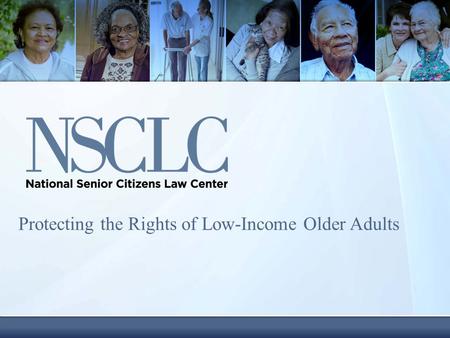 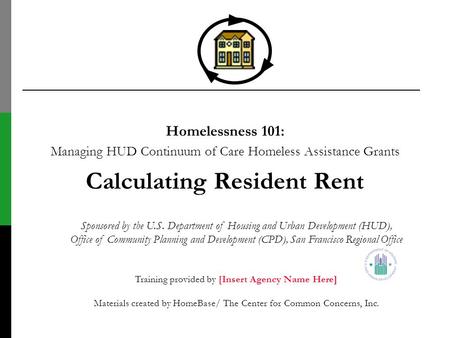 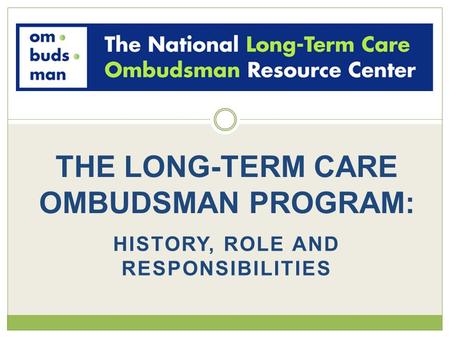 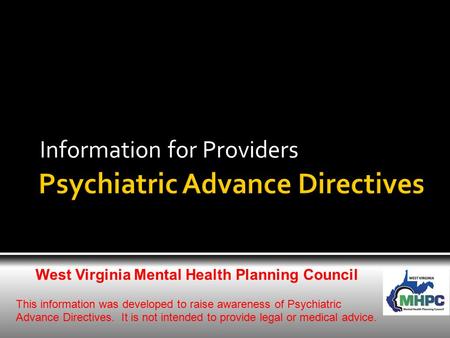 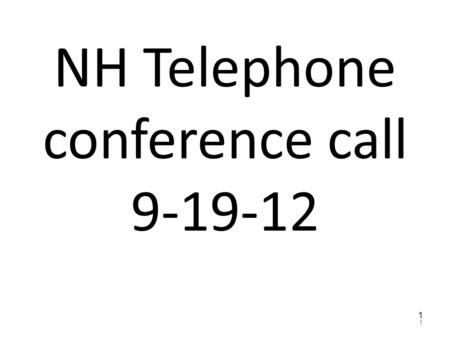 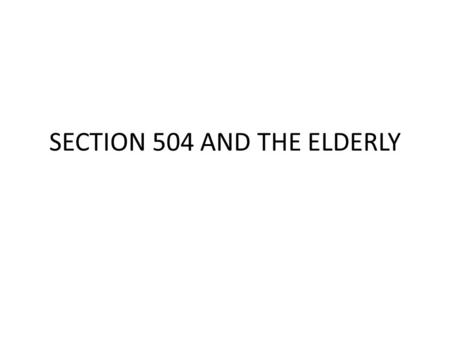 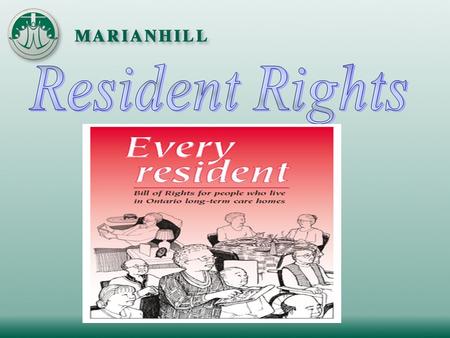 In 1987 The Ontario government passed this Bill of Rights to make sure that Long Term Care facilities are truly HOME to the people who live in them. 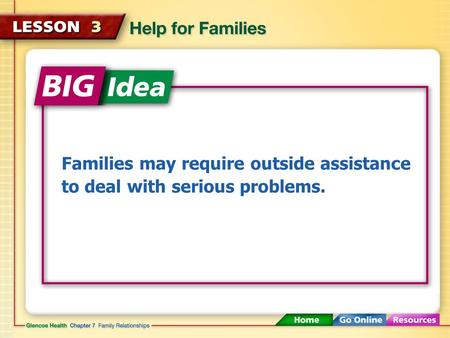 Families may require outside assistance to deal with serious problems. 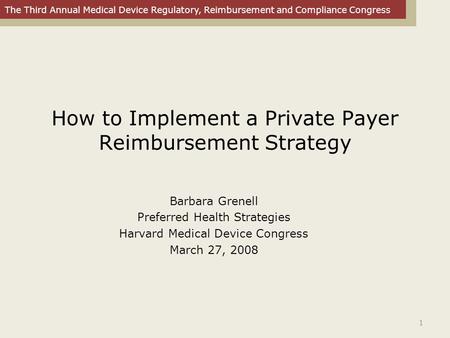 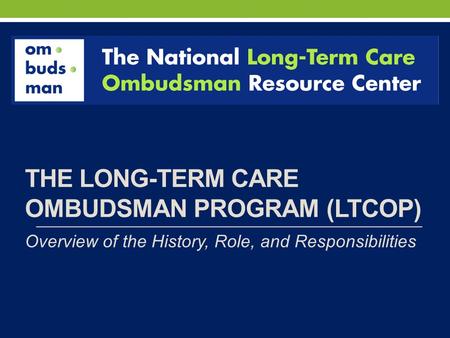 THE LONG-TERM CARE OMBUDSMAN PROGRAM (LTCOP) Overview of the History, Role, and Responsibilities. 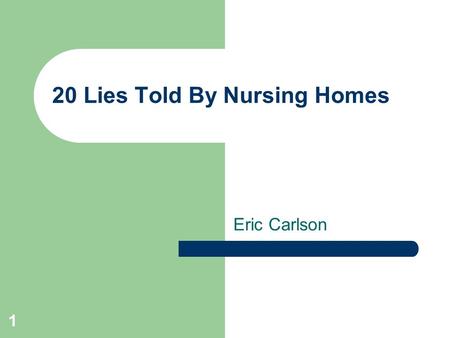 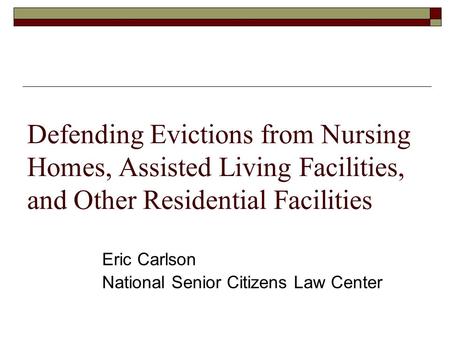 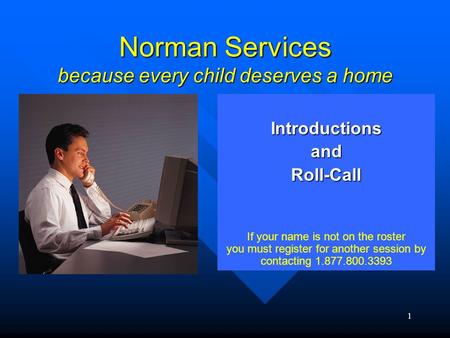 1 Norman Services because every child deserves a home IntroductionsandRoll-Call If your name is not on the roster you must register for another session. 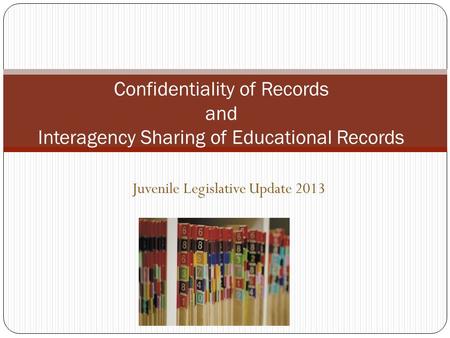 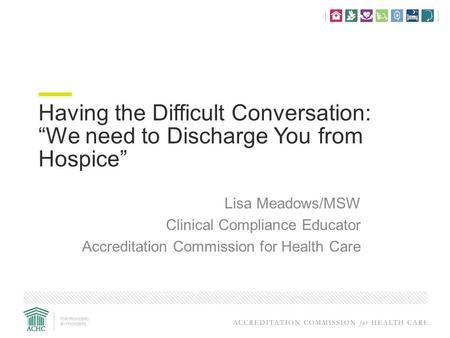 Having the Difficult Conversation: “We need to Discharge You from Hospice” Lisa Meadows/MSW Clinical Compliance Educator Accreditation Commission for Health. 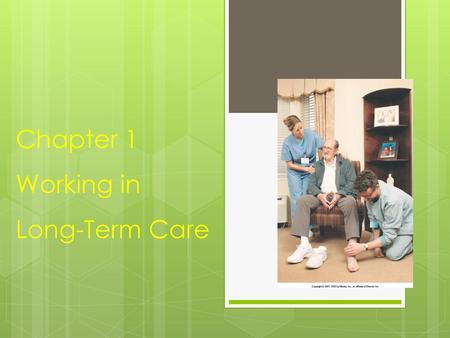