1 NADA PROTOCOL: THE GRASSROOTS TREATMENT Presented by: National Acupuncture Detoxification Association In Response to: Prescription Opioid and Heroin Epidemic Awareness Week “During Prescription Opioid and Heroin Epidemic Awareness Week, we pause to remember all those we have lost to opioid use disorder, we stand with the courageous individuals in recovery, and we recognize the importance of raising awareness of this epidemic.” --Proclamation by President Obama, September 16, 2016

2 WHAT IS ? The National Acupuncture Detoxification Association (NADA), a not-for-profit training and advocacy organization, encourages community wellness through the use of a standardized auricular acupuncture protocol for behavioral health, including addictions, mental health, and disaster & emotional trauma.

3 The NADA protocol is a non-verbal approach to healing that involves the gentle placement of up to five small, sterilized disposable needles into specific sites on each ear. Recipients sit quietly in a group setting for 30-45 minutes allowing the treatment to take effect. The NADA Protocol is an adjunct therapy. THE NADA PROTOCOL

4 THE NADA PROTOCOL: “A standard acupuncture textbook (Landgren 2008) describes the functions of each of the five points in the basic formula as follows: 1.Sympathetic is used for numerous diseases related to disruption in both sympathetic and parasympathetic nervous systems. It has a strong analgesic and relaxant effect upon internal organs. It dilates blood vessels. 2.Shen men regulates excitation and inhibition of the cerebral cortex. It produces sedative and anti-allergy effects. It is used for many neuropsychiatric disorders. 3.Lung is used for analgesia, sweating, and various respiratory conditions. 4.Liver is used for hepatitis, anemia, neuralgia, muscle spasms, and eye diseases. 5.Kidney is a strengthening point for the cerebrum, hematopoietic system and kidneys. It is used for neurasthenia, lassitude, headache, and urogenital problems. Traditional Chinese theory associates the lung with the grieving process; the liver with resolving aggression; and the kidney with will power, coping with fear and new growth.” Smith, MO (2013) Toward the Radical Middle: Ear Acupuncture in the Treatment of Addiction, Mental Health, and Trauma. Laramie, WY: National Acupuncture Detoxification Association.

6 THE LINCOLN HOSPITAL IN BRONX, NY: THE BEGINNING OF NADA “Acupuncture treatment for drug and alcohol problems was primarily developed at Lincoln Hospital, a New York City owned facility in the impoverished South Bronx. The Lincoln Recovery Center was a state-licensed treatment program that had provided more than 800,000 acupuncture treatments in the past 34 years…. The National Acupuncture Detoxification Association (NADA) was established in 1985 to increase the use of the Lincoln model and to maintain quality and responsibility in the field. Registered trainers from NADA have trained many thousands of Acudetox Specialists (ADS) practitioners. The Center for Substance Abuse Treatment [CSAT], part of the Substance and Mental Services Administration [SAMHSA] published a Treatment Improvement Protocol [TIPs] in 2006, CSAT TIP #45 on “Detoxification and Substance Abuse”, which included the use of acupuncture in its best practice guidelines for the treatment of addiction. “ Smith, MO (2013) Toward the Radical Middle: Ear Acupuncture in the Treatment of Addiction, Mental Health, and Trauma. Laramie, WY: National Acupuncture Detoxification Association.

7 “I was skeptical at first, but everyone I talked to said [EA] helped. I became a believer.” —Former Attorney General Janet Reno, who oversaw the first NADA-based drug court in the United States (1) “The Texas Department of State Health Services very much supports the use of [EA] and finds it extremely effective.” —John Keppler, MD, Former Director, Texas Mental Health and Substance Abuse Division Department of State Health Services (2008 NADA Conference) (1) 1.Reduce Recidivism, Prison Violence & Related Costs in California: Train Social Service Providers in Safe & Cost-Effective Ear Acupuncture, 2010. 2.Bigelow, J. (2008). Governor Richardson’s Task Force On Prison Reform. Increasing public safety in New Mexico before, during and after incarceration: New directions for reform in New Mexico corrections. State of New Mexico. Retrieved from http://corrections.state.nm.us/reentry_reform/docs/prision_reform.pdf "[EA] has been shown to reduce drug and alcohol cravings, reduce withdrawal symptoms, and in conjunction with group counseling, can facilitate the seeking of more comprehensive treatment...[EA] is cheap and a very effective on-the-ground treatment modality when coupled with other psychosocial interventions.”—State of New Mexico, Governor Richardson's Task Force on Prison Reform.(1,2) The NADA Protocol: Ear Acupuncture

9 RESEARCH AND STUDIES “Acupuncture is more accessible to drug courts than methadone and other pharmacological interventions.” (1) 1. Drug Court Report published by SAMHSA/CSAT (2001) www.ncjrs.gov/pdffiles1/bja/188086.pdf Founding chairperson, Dr. Michael O. Smith, treats a patient with what is now known today as the NADA Protocol Treatment at the Lincoln Hospital in the 1970s. “32% of drug courts utilize acupuncture services…” (1) The NADA Protocol is provided in 23 states by a variety of healthcare workers who are trained as Acudetox Specialists (ADS). 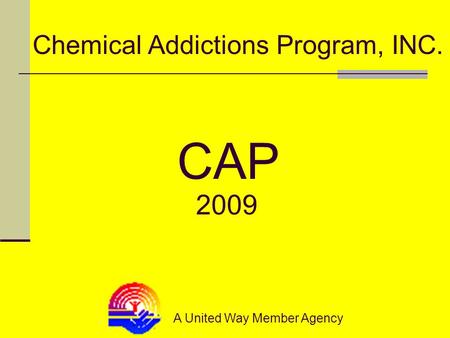 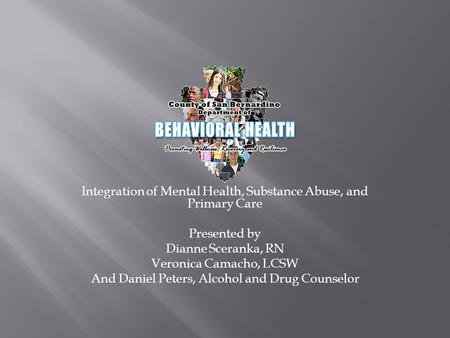 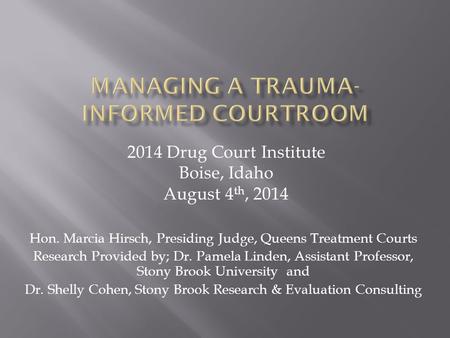 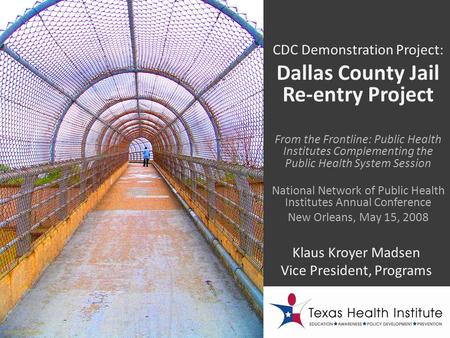 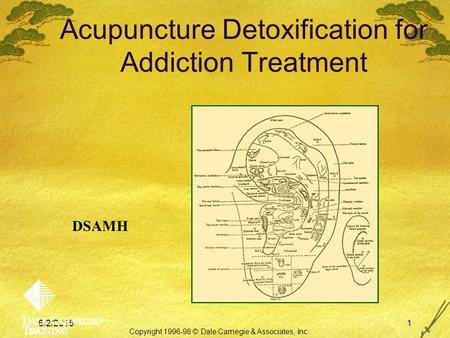 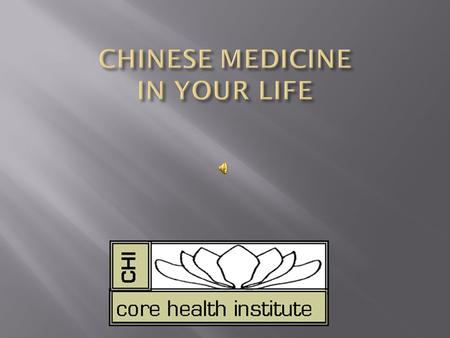 BODY AS MACHINEBODY AS GARDEN by Liao Lin Shen. 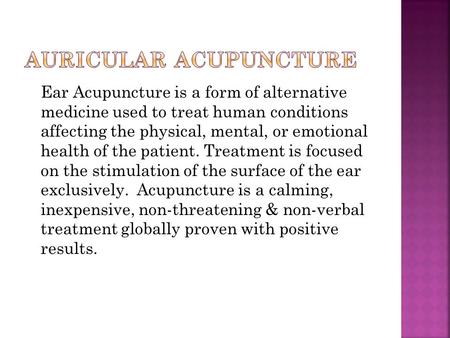 Ear Acupuncture is a form of alternative medicine used to treat human conditions affecting the physical, mental, or emotional health of the patient. Treatment. 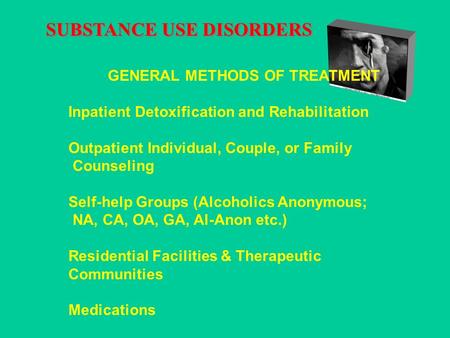 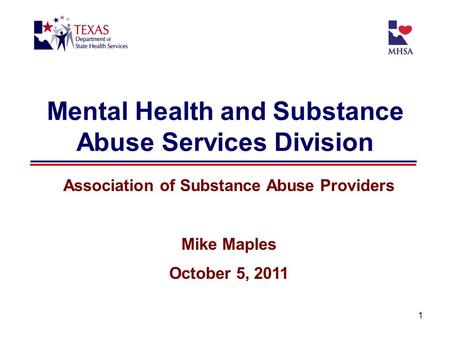 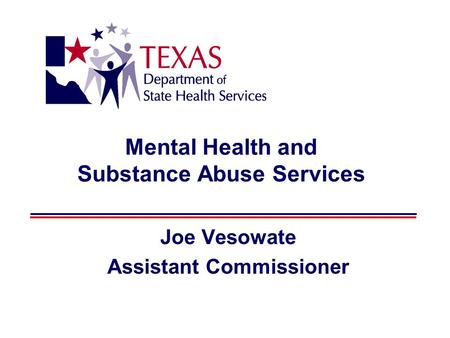 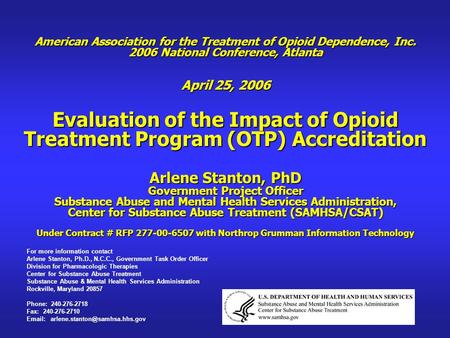 American Association for the Treatment of Opioid Dependence, Inc National Conference, Atlanta April 25, 2006 Evaluation of the Impact of Opioid Treatment. 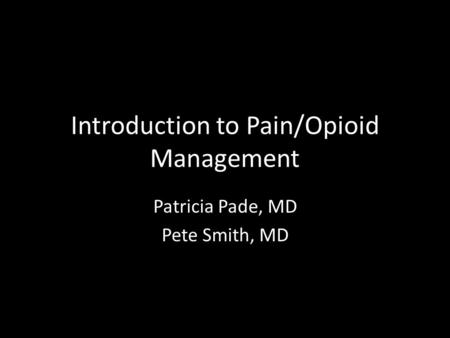 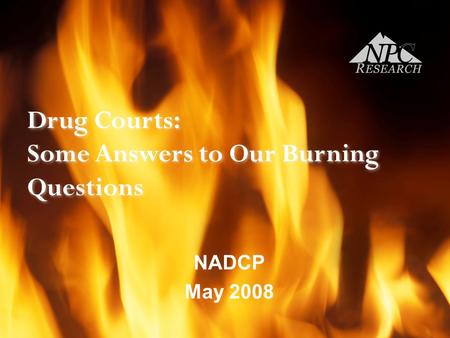 Drug Courts: Some Answers to Our Burning Questions NADCP May 2008. 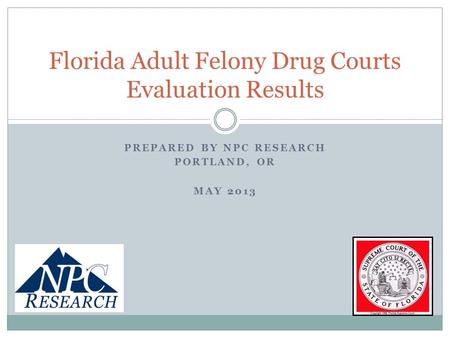 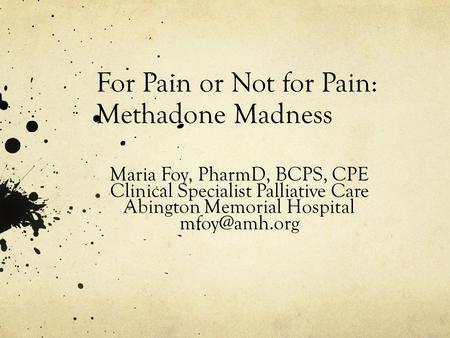 For Pain or Not for Pain: Methadone Madness 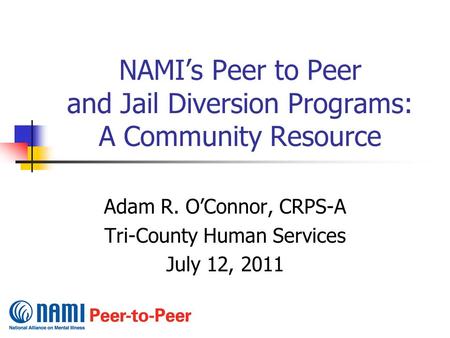 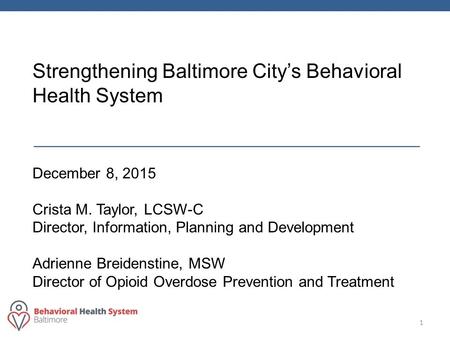 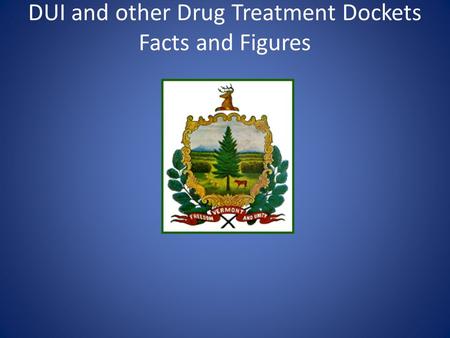 DUI and other Drug Treatment Dockets Facts and Figures. 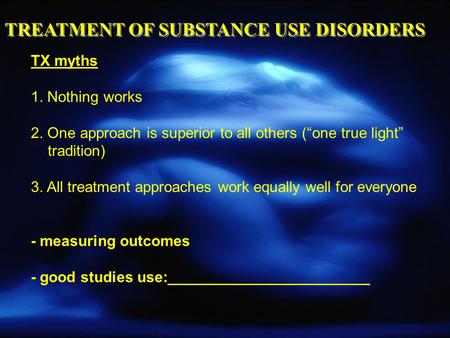 TREATMENT OF SUBSTANCE USE DISORDERS TX myths 1. Nothing works 2. One approach is superior to all others (“one true light” tradition) 3. All treatment. 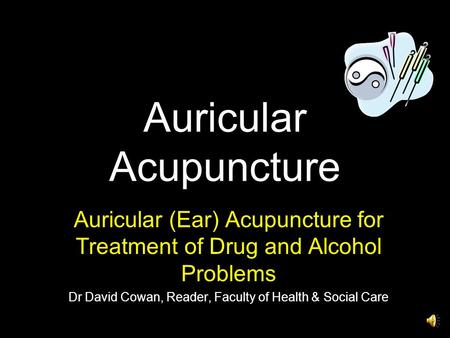