A PRESENTATION ON “3D PRINTING TECHNOLOGY”. What is 3D Printing ?  3D printing or additive manufacturing is a process of making three dimensional solid.

Presentation on theme: "A PRESENTATION ON “3D PRINTING TECHNOLOGY”. What is 3D Printing ?  3D printing or additive manufacturing is a process of making three dimensional solid."— Presentation transcript:

1 A PRESENTATION ON “3D PRINTING TECHNOLOGY”

2 What is 3D Printing ?  3D printing or additive manufacturing is a process of making three dimensional solid objects from a digital file.  The creation of a 3D printed object is achieved using additive processes.  Additive process, where successive layers of material are laid down in different shapes.  Objects can be of almost any shape or geometry, and are produced from a 3D model or other electronic data source.3D model

3 How Does It Work? A person creates a 3D image of an item using a computer-aided design (CAD) software program. The CAD information is sent to the printer. The printer forms the item by depositing the material in layers—starting from the bottom layer—onto a platform. In some cases light or lasers are used to harden the material.

8 Printing To perform a print, the machine reads the design and lays down successive layers of liquid, powder, or sheet material to build the model from a series of cross sections. These layers, which correspond to the virtual cross sections from the CAD model, are joined together or automatically fused to create the final shape. Advantage: Ability to create almost any shape or geometric feature.

11 Selective laser sintering (SLS)  This builds objects by using a laser to selectively fuse together successive layers of a cocktail of powdered wax, ceramic, metal, nylon or one of a range of other materials  The laser fuses small particles of plastic, metal, ceramic or glass powders into a 3-dimensional mass.

12 Fused deposition modelling (FDS)  This method uses a plastic filament or metal wire as input material to an extrusion nozzle. The nozzle is heated to melt the material and can be moved in both horizontal and vertical directions by CAM. The material hardens immediately after extrusion from the nozzle.

13 Stereolithography  Stereolithography is a process for creating three- dimensional objects using a computer-controlled laser to build the required structure, layer by layer. It does this by using a resin known as liquid photopolymer that hardens when in contact with the air.  Starting from a 3D image, a part is built slice by slice from bottom to top in a vessel of liquid polymer that hardens when struck by a laser beam.

16 Fashionable Plaster Medical This 3D-printed cast to help repair broken bones may be the future of medical orthopedic casts. 3D-printed casts also bring out the positive potential of this emerging technology.

18 Animated Characters Sony pictures was the first to embrace the concept of 3D printing to create characters for the movie Pirates – A Band of Misfits. Games & Entertain ment

19 Skyfall’s Aston Martin Skyfall filmmakers 3D-printed this rare Aston Martin so they wouldn't have to damage the original for the film sequence. The effects crew model makers called on a company called Voxeljet, which used a massive 3D printer with a capacity of 283 cubic feet to reproduce three 1:3 scale models of the Aston Martin. Pop- Culture

20 3D-printed Lunar Base Building a base on the moon could theoretically be made much simpler by using a 3D printer to construct it from local materials. The concept was recently endorsed by the European Space Agency (ESA) which is now collaborating with architects to gauge the feasibility of 3D printing using lunar soil. Defense & Space

Download ppt "A PRESENTATION ON “3D PRINTING TECHNOLOGY”. What is 3D Printing ?  3D printing or additive manufacturing is a process of making three dimensional solid." 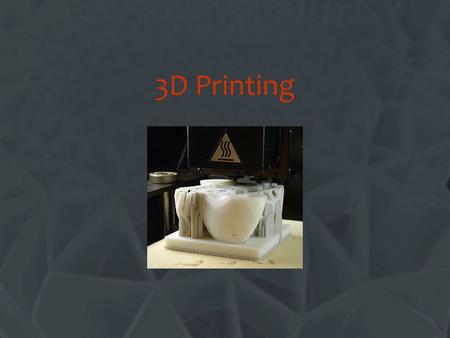 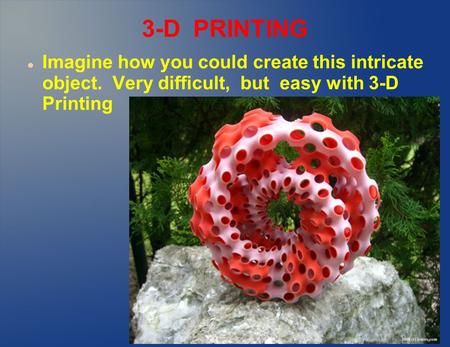 3-D PRINTING Imagine how you could create this intricate object. Very difficult, but easy with 3-D Printing. 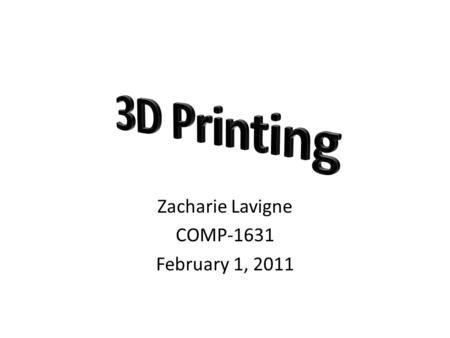 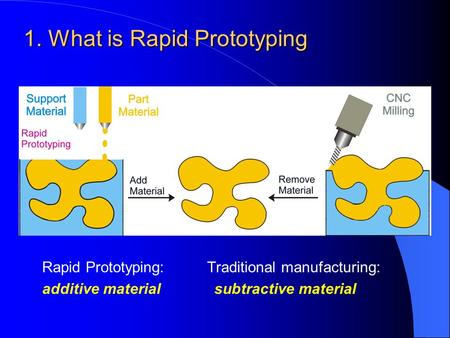 1. What is Rapid Prototyping 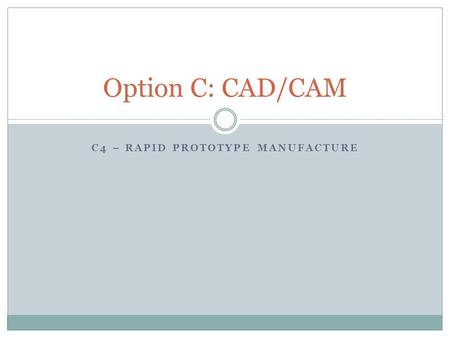 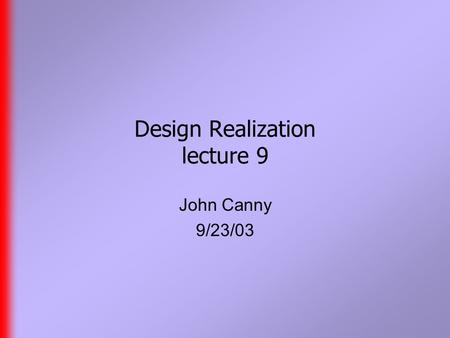 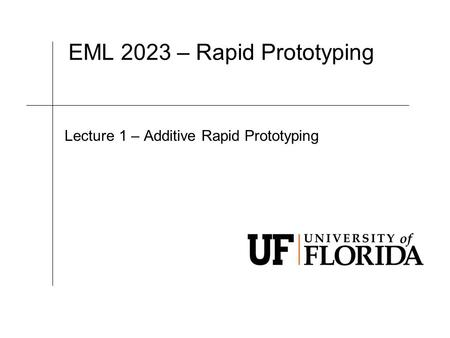 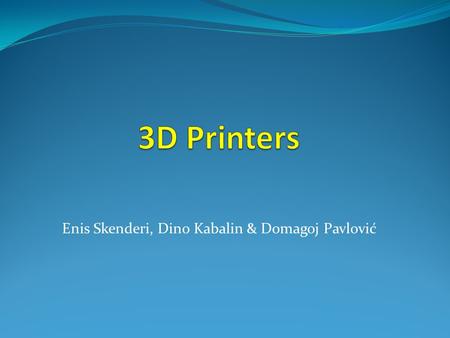 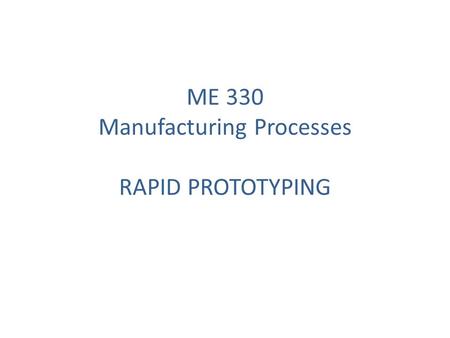 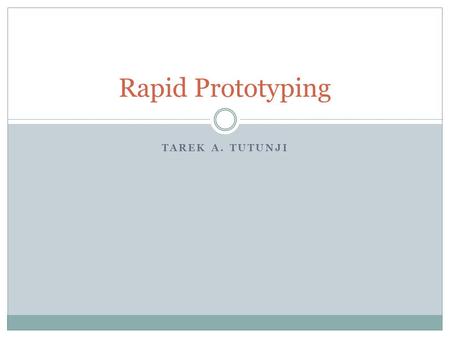 TAREK A. TUTUNJI Rapid Prototyping. Prototype A prototype can be defined as a model that represents a product or system. This model is usually used for. 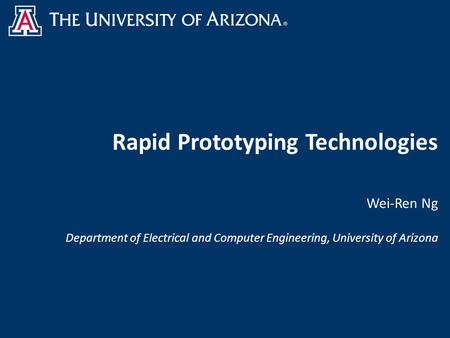 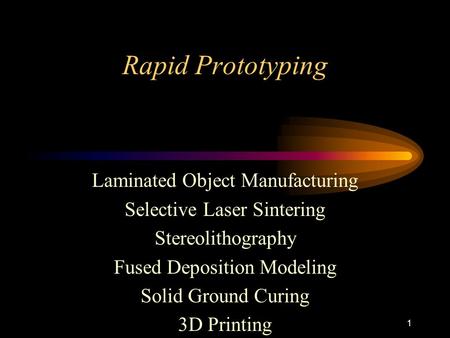 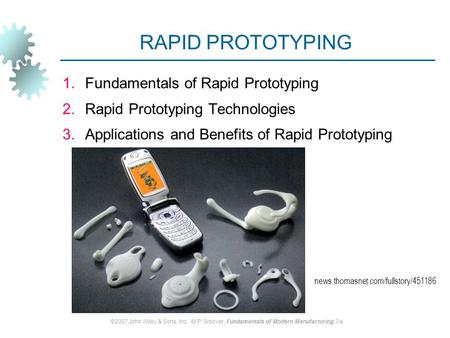 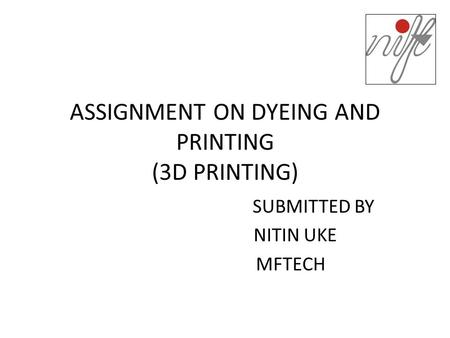 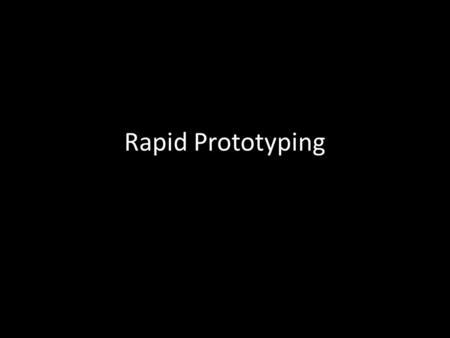 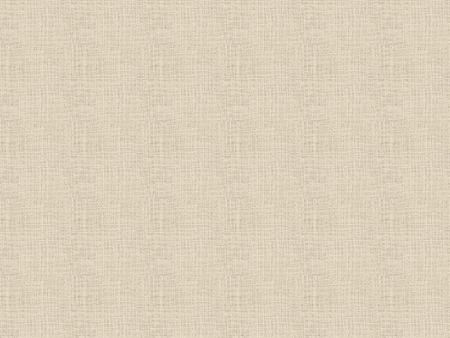 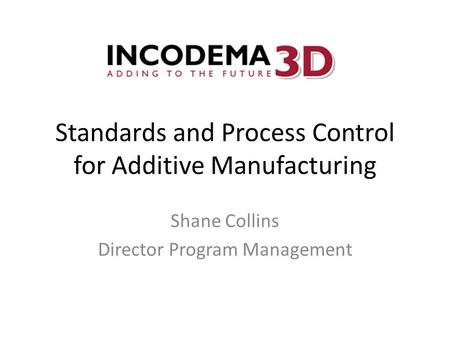 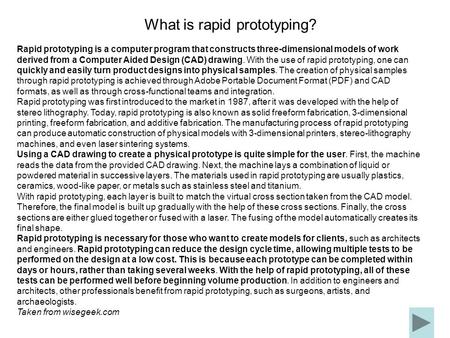 Rapid prototyping is a computer program that constructs three-dimensional models of work derived from a Computer Aided Design (CAD) drawing. With the use. 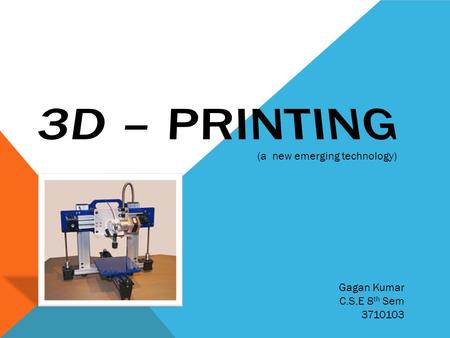 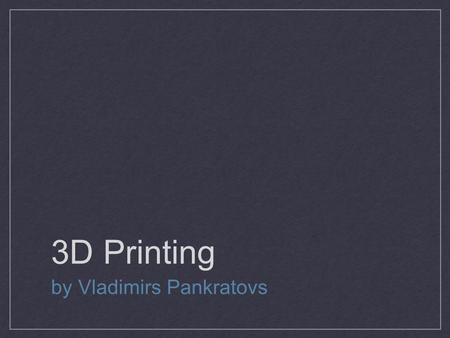