Presentation on theme: "Taxes And Spending “In this world, nothing is certain but death and taxes” -Benjamin Franklin 1."— Presentation transcript:

1 Taxes And Spending “In this world, nothing is certain but death and taxes” -Benjamin Franklin 1

2 What are Taxes? Taxes are payments people are required to pay to local, state and national governments. Taxes are used to pay for services provided by government: –Schools –Police –Defense –Etc. 2

4 Limits on the Power to Tax Certain taxes are prohibited or limited in the Constitution: The purpose of the tax must be for “the common defense and general welfare” Federal taxes must be the same in every state The government may not tax exports 4

5 Impact of Taxes Types of taxes affect people differently, depending on their income. 3 forms of taxes are: Progressive Tax Regressive Tax Proportional Tax 5

6 Progressive Tax - Tax designed to take a larger percentage of income from the wealthy than the poor. Argument for: the wealthy can afford a higher tax and should pay more of the tax burden. Argument against: why should the hardest working and most successful pay more taxes? Wealthy are penalized for their success. Ex. Income Tax with Tax Brackets 6

8 Regressive Tax - Tax which takes a higher percentage of income from the poor than from the rich. Ex. Sales Tax Argument for: Tax levied on what is bought. If you cannot afford the tax, do not buy the item. Argument against: Tax harms those who can least afford it. 8

10 Proportional Tax - Tax that takes the same percentage of income from the wealthy and poor. Argument for: Everyone is equal- pay same % of income. Argument against: The poor need their income more than the wealthy. They need every penny and cannot afford as much of a tax as the wealthy. Ex. “Flat Tax” Income Tax, (does not exist in our country, but some political parties support the idea) 10

12 Federal Income Taxes “Pay-as-You-Earn” Taxation –Federal income taxes are collected throughout the course of the year as individuals earn income Tax Withholding –The process by which employers take tax payments out of an employees pay before he or she receives it. 12

14 Federal Income Taxes (cont.) Tax Returns: –At the end of the year, an employer gives employees a report showing how much they withheld in taxes. –Individuals file a tax return with information regarding exemptions and deductions that adjust the amount of tax that should have been paid. –If you paid too much, you get a refund. If you paid too little, you must pay the balance. –All tax returns must be filed by April 15 th. 14

15 Social Security Taxes Provides funds for older Americans, their survivors, and disability insurance. Program funded by the Federal Insurance Contributions Act (FICA) – a U.S. law requiring a deduction from paychecks and income that goes toward the Social Security program and Medicare. Both employees and employers are responsible for sharing the FICA payments. 15

16 Medicare Funds a national health insurance for people over 65 and with certain disabilities. Paid through FICA. 12.4% of earned income up to an annual limit must be paid into Social Security, and an additional 2.9% must be paid into Medicare. If you are a waged or salaried employee, half of the payroll tax - 6.2% for Social Security and 1.45% for Medicare - is automatically withheld from each paycheck, and your employer contributes the other half. There is no income cap (or wage base limit) for the Medicare portion of the tax, meaning you continue to owe your half of the 2.9% tax on all wages earned for the year. The Social Security tax, however, has a wage base limit - the maximum wage that is subject to the tax for that year. 16

17 Unemployment Taxes Paid for by employers, provides “unemployment compensation” for workers laid off through no fault of their own and are actively looking for work. The amount of an employer's FUTA tax liability determines when the tax must be paid; the form for reporting the tax is due in the first quarter of the year. As of Jul. 1, 2011, the FUTA tax rate was 6% of the first $7,000 paid to each employee annually. This means that if a company had 10 employees who each earned wages of at least $7,000 for the year, the company's annual FUTA tax would be 0.06 x $70,000 = $4,200. Only employers, not employees, pay the FUTA tax. Many states collect an additional unemployment tax from employers. 17

18 Other Taxes 1.Excise Tax: tax on the sale or production of a good. Often used to discourage use of the item, called a “Luxuary” or “Sin” tax. Ex. Cigarettes, Alcohol, Gas, Telephone 2.Estate Tax: Tax on the total value of money and property of a person who has died. Only taken on estates over $1.5 million. Opponents labeled it as the “Death Tax” because they believe it is unfair to wealthy, successful people. 18

19 Other Taxes (cont.) 3.Gift Tax: Tax on money or property given as gift over $13,000 per year in 2011-2012 (very complicated, varies) 4.Import Taxes: known as Tariffs, taxes on goods entering the U.S. Used to raise price of foreign goods and help American companies. 19

20 Taxes on monetary and non-monetary benefits A fringe benefit is a form of pay for the performance of services. Fringe benefits are benefits or compensation given to employees in addition to wages or salaries. Ex. 1: to allow the employee to use a business vehicle to commute to and from work. Ex.2: accident and health benefits, group term life coverage, education reimbursement, childcare and assistance reimbursement, employee discounts, employee stock options,... All fringe benefits are taxable and must be included in the recipient's pay unless the law specifically excludes it (certain conditions are met). The benefits in Ex. 2 are not subject to federal income tax withholding. 20

26 Local Taxes Property Tax: a tax levied on the value of property (real estate) owned. The main source of public school funding. Sales Tax: additional taxes above state sales tax. –NY City Sales Tax rate is 4.5%, NY State Sales and Use Tax is 4% and the Metropolitan Commuter Transportation District surcharge of 0.375% for a total Sales and Use Tax of 8.875 percent. 26

28 Garnishment A legal process whereby payments towards a debt owed by an individual can be paid by a third party - which holds money or property that is due to the individual - directly to the creditor. The third party in such a case is generally the individual's employer and is known as the garnishee. Garnishments are typically used for debts such as unpaid taxes, monetary fines and child support payments. Ex.: if John Smith owes $10,000 in unpaid taxes that have been overdue, the IRS can resort to garnishment of his wages. The IRS would then direct Smith's employer to remit a portion of his salary for a certain amount of time, until Smith has paid off his taxes in full. Garnishments can have a negative impact on one’s credit rating. 28

Download ppt "Taxes And Spending “In this world, nothing is certain but death and taxes” -Benjamin Franklin 1." 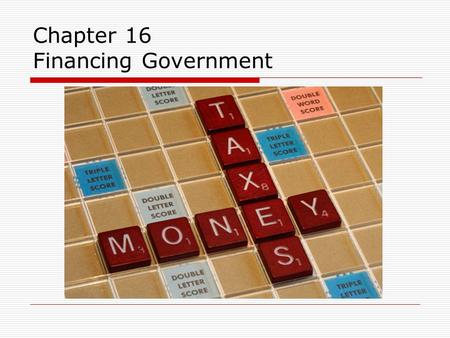 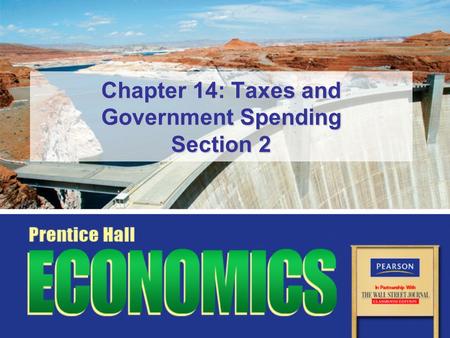