3 Taxes and the Constitution

5 Limits on the Power to Tax
The power to tax is also limited through the Constitution: 1. The purpose of the tax must be for “the common defense and general welfare.” 2. Federal taxes must be the same in every state. 3. The government may not tax exports.

6 Tax Bases and Tax Structures
A tax base is the income, property, good, or service that is subject to a tax.

7 Proportional Taxes A proportional tax is a tax for which the percentage of income paid in taxes remains the same for all income levels.

8 Progressive Taxes A progressive tax is a tax for which the percent of income paid in taxes increases as income increases.

9 Regressive Taxes A regressive tax is a tax for which the percentage of income paid in taxes decreases as income increases.

11 Simplicity Tax laws should be simple and easily understood. Economy Government administrators should be able to collect taxes without spending too much time or money.

12 Certainty It should be clear to the taxpayer when the tax is due, how much is due, and how it should be paid. Equity The tax system should be fair, so that no one bears too much or too little of the tax burden.

14 If demand is inelastic, a tax will increase the price of a good and consumers will bear a large burden of the tax. If demand is elastic, the opposite is true.

16 Individual Income Taxes
“Pay-as-You-Earn” Taxation Federal income taxes are collected throughout the course of the year as individuals earn income.

17 Tax Withholding Withholding is the process by which employers take tax payments out of an employee’s pay before he or she receives it.

18 Tax Brackets The federal income tax is a progressive tax. In 1998, there were five rates, each of which applied to a different range of income.

19 Filing a Tax Return A tax return is a form on which you declare your income to the government and determine your taxable income. Taxable income is a person’s total (or gross) income minus exemptions and deductions.

22 Corporate Income Taxes
Like an individual, a corporation must pay a federal tax on its taxable income. Corporate income taxes are progressive — as a company’s profits increase so does the amount paid in taxes.

24 Social Security Taxes This program is funded by the Federal Insurance Contributions Act (FICA). Most of the FICA taxes you pay go to Social Security, or Old-Age, Survivors, and Disability Insurance (OASDI)

25 Medicare Taxes Medicare is a national health insurance program that helps pay for health care for people over 65 and for people with certain disabilities. Medicare is also funded by FICA taxes.

26 Unemployment Taxes Unemployment taxes are collected by both federal and state governments. Workers can collect “unemployment compensation” if they are laid off through no fault of their own and if they are actively looking for work.

27 Other Types of Taxes

29 Gift Taxes Import Taxes
A gift tax is a tax on the money or property that one living person gives to another. Import Taxes Taxes on imported goods are called tariffs.

31 Mandatory and Discretionary Spending
Mandatory spending refers to money that lawmakers are required by law to spend on certain programs or to use for interest payments on the national debt. Discretionary spending is spending about which government planners can make choices.

33 Entitlements An entitlement program is a social welfare program that people are “entitled” to if they meet certain eligibility requirements. These include:

37 State and Local Taxes and Spending

39 Where Are State Taxes Spent?

40 Highways and Transportation
Education State education budgets help finance public state universities and provide some aid to local governments for elementary, middle, and high schools. Public Safety State governments operate state police systems, as well as correctional facilities within a state. Highways and Transportation Building and maintaining highways is another state expense. States also pay some of the costs of waterways and airports.

45 The Jobs of Local Government
The following is a brief list of the many functions that local governments carry out or assist in: Public school systems Law enforcement Fire protection Public transportation Public facilities, such as libraries and hospitals Parks and recreational facilities Record keeping (birth/death certificates, wills, etc.)

46 Local Government Revenues
Property taxes are the main source of local revenue. These taxes are paid by people who own homes, apartments, buildings, or land. Local governments sometimes collect excise, sales, and income taxes as well. Some taxes, such as room and occupancy taxes, are aimed at nonresidents in order for local governments to earn additional revenue. 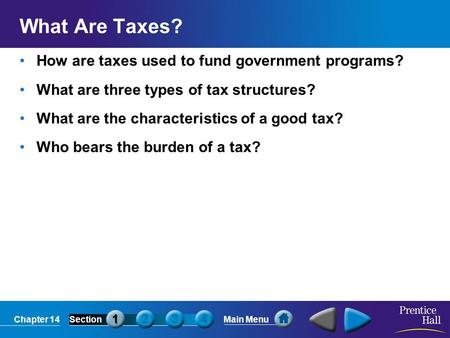 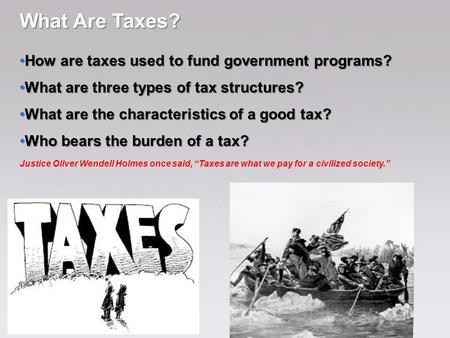 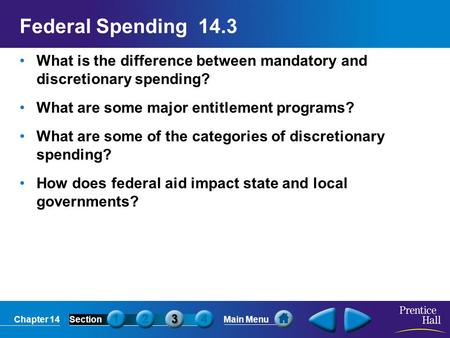