4 Picasso’s style Picasso’s painting style changed over the periods of his life more that any other artist. He was always trying new things.

6 Sometimes he would paint things that looked so round that you thought you could pick them up right from the page!

11 Cubism was the next style of painting that Picasso developed and made famous. This painting is called Man with a Guitar. The man and his guitar are broken into little cubes. That’s where the name Cubism came from. Look closely, what can you find in this picture?

14 Cubism is one of the most important periods in the history of modern art. This was one of the first times that artists created art that didn’t look exactly like things look in real life.

15 Picasso kept working with Cubism, allowing it to change over the years.

21 Guernica In 1937 something happened that made Picasso paint his most powerful and serious painting. During a civil war in Spain, the small town of Guernica was destroyed by bombs. Picasso became very angry and used his talent as a painter to show the world the wrongness of war.

23 Picasso also did some public artwork such as this mural.

25 The thing that made Picasso such a great artist was his originality. 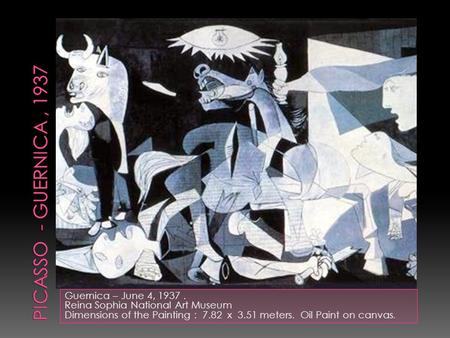