Pathologies of the Integumentary System

Presentation on theme: "Pathologies of the Integumentary System"— Presentation transcript:

1 Pathologies of the Integumentary System

2 Pathologies Pathology: the study of disease
Studying how injury occurs to cells and tissues, how body responds to injury Pathos: feeling Ology: study of

3 Acne Acne typically appears on your face, neck, check, back and shoulders, which are the areas of your skin with the largest number of functional oil glands. Cause: Occurs when the opening of hair cells are blocked by dead epidermal cells. The oil from the sebaceous glands gets trapped and bacteria that live in your skin build up and cause irritation that leads to inflammation Treatment: Acne treatments work by reducing oil production, speeding up skin cell turnover, fighting bacterial infection, and reducing the inflammation of the affected area. Each pore opens to a follicle. A follicle contains a hair and an oil gland. The oil released by the gland helps remove old skin cells and keeps your skin soft. When glands produce too much oil, the pores can become blocked. Dirt, bacteria, and cells build up. The blockage is called a plug or comedone. If the top of the plug is white, it is called a whitehead. If the top of the plug is dark, it is called a blackhead. If the plug breaks open, swelling and red bumps occur. Acne that is deep in your skin can cause hard, painful cysts. This is called cystic acne. Acne tends to run in families. It may be triggered by: Hormonal changes related to puberty, menstrual periods, pregnancy, birth control pills, or stress Greasy or oily cosmetic and hair products Certain drugs (such as steroids, testosterone, estrogen, and phenytoin) High levels of humidity and sweating

4 Baldness Loss of hair Causes:
Thyroid Problems Genetic. Alopecia Areata:The condition is brought on by an auto-immune disorder in which your own body attacks and destroys its own hair follicles. Scalp infections Skin disorders Treatments: There are a variety of treatments that include steroids and surgical implants. These try to stimulate the growth of the hair follicles or replace the destroyed ones. Gradual thinning on top of head. This is the most common type of hair loss, affecting both men and women. In men, hair often begins to recede from the forehead in a line that resembles the letter M. Women typically retain a line of hair at the forehead but experience a broadening of the part in their hair. Circular or patchy bald spots. Some people experience smooth bald spots, often about an inch (2.6 centimeters) across. This type of hair loss usually affects just the scalp, but it sometimes also occurs in beards or eyebrows. In some cases, your skin may become itchy or painful before the hair falls out. Sudden loosening of hair. A physical or emotional shock can cause hair to loosen. Handfuls of hair may come out when combing or washing your hair or even after gentle tugging. This type of hair loss usually causes overall hair thinning and not bald patches. Full-body hair loss. Some conditions and medical treatments, such as chemotherapy for cancer, can result in the loss of hair all over your body. The hair usually grows back after treatment ends. Thyroid problems. The thyroid gland helps regulate hormone levels in your body. If the gland isn't working properly, hair loss may result. Alopecia areata. This disease occurs when the body's immune system attacks hair follicles — causing smooth, roundish patches of hair loss. Scalp infections. Infections, such as ringworm, can invade the hair and skin of your scalp, leading to hair loss. Once infections are treated, hair generally grows back. Other skin disorders. Diseases that can cause scarring, such as lichen planus and some types of lupus, can result in permanent hair loss where the scars occur. Risk Factors: -family history: can affect when lose hair; developmental speed -hair treatment: can cause hair brittle/breaking off, pulling hair super tightly -poor nutrition: not getting enough iron and protein

5 Vitiligo A condition in which your skin loses melanin causing slowly enlarging white patches or irregular shapes to appear on your skin. Cause: Vitiligo occurs when the cells that produce melanin die or no longer produce melanin. It may be due to an immune system disorder. Treatment: Steroid Creams – sometime help the melanocytes stay alive and create pigment Depigmentation – bleach the skin to match the color of the lighter patches Skin transplants – replace the damaged melanocytes eneralized. In this most common subtype, pigment loss is widespread across many parts of your body, often symmetrically. Segmental. Loss of skin color occurs on only one side of your body. This type tends to occur at a younger age, progress for a year or two, then stop. Focal. Depigmentation is limited to one or a few areas of your body. Doctors and scientists have theories as to what causes vitiligo. It may be due to an immune system disorder. Heredity may be a factor because there's an increased incidence of vitiligo in some families. Some people have reported a single event, such as sunburn or emotional distress, that triggered the condition. Sometimes pigment loss can occur in someone who’s had a melanoma, a malignancy of the cells that produce melanin (melanocytes).

6 Psoriasis A chronic (reuccuring) condition where the skin inflames and becomes covered in silvery scales Cause: The epidermis continues to replicate uncontrollably (hyperplasia). Possibly because of antibodies stimulating the growth but we don’t really know exactly why. Treatment: Drugs that stop the antibodies from communicating with the epidermal cells or that stop the epidermal cells from causing an inflammatory response. Psoriasis may affect any or all parts of the skin. There are five main types of psoriasis: Erythrodermic -- The skin redness is very intense and covers a large area. Guttate -- Small, pink-red spots appear on the skin. Inverse -- Skin redness and irritation occurs in the armpits, groin, and in between overlapping skin. Plaque -- Thick, red patches of skin are covered by flaky, silver-white scales. This is the most common type of psoriasis. Pustular -- White blisters are surrounded by red, irritated skin.

7 Eczema A reoccurring epidermal condition that causes dryness, flaking, redness, inflammation, and sometimes blistering and bleeding Cause: Usually caused by an irritant coming in direct contact with the skin, an allergen being consumed, or hormone imbalances; although there are many other causes. Treatment: Steroid creams or immune system regulators which prevent the immune system from reacting and causing the inflammation. Also, monitoring the diet for foods that lead to the inflammatory response and removing the allergen once identified. Signs and symptoms of atopic dermatitis (eczema) include: Red to brownish-gray colored patches Itching, which may be severe, especially at night Small, raised bumps, which may leak fluid and crust over when scratched Thickened, cracked or scaly skin Raw, sensitive skin from scratching

8 Athlete’s Foot Scaling, flaking and itching of the infected area, may spread to the groin at which point it is called “jock itch” Cause: caused by a fungal infection Treatment: anti-fungal drugs, recommend keeping feet clean and dry (i.e. drying between toes after showering, baby powder in sneakers, etc.)

9 Albinism Large patch of white skin or the entire body is white (including white hair and red irises in the eyes). Lack of melanin leads to no protection from the sun and thus sunburn occurs easily. Cause: Congenital disorder. Bodies do not produce an enzyme needed for the production of melanin. Treatment: None. Recommended to avoid direct sunlight especially during the hours that the sun is strongest (12-2pm)

11 Burns Three types: affecting different layers of skin:
First degree: outer layer of skin Second degree: (partial thickness) outer and underlying layer of skin Third degree: (full thickness) deeper tissue Causes: dry heat (fire), wet heat (steam, hot liquids), radiation, friction, sun, electricity, chemicals Treatment: (for major burns) Administer IV fluids faster than losing Debridement: removal of dead tissue from burn (prevent infection) Skin grafts: transferring skin to help close wound, preventing entry of microorganisms First-degree burns affect only the outer layer of the skin. They cause pain, redness, and swelling. Second-degree (partial thickness) burns affect both the outer and underlying layer of skin. They cause pain, redness, swelling, and blistering. Third-degree (full thickness) burns extend into deeper tissues. They cause white or blackened, charred skin that may be numb. Burns to your airways can be caused by inhaling smoke, steam, superheated air, or toxic fumes, often in a poorly ventilated space. What happens: Capillaries become more permeable (don’t understand this yet); fluid and electrolytes leak into surrounding tissues (edema= swelling) This causes: tissue damage, shock, and b/c losing liquid, heart has less to pump, so lower BP Also typically higher Temp: F Bc of a burn, can cause weight loss bc metabolism is super high, so they often make you have a high cal/high protein diet (protein to repair tissue!) Treatment: Admin IV drugs: usually can decrease dose after 24h bc cap perm. Stops Getting rid of dead skin to prevent infection Skin grafts from other places in the body Infections: major cause of death in burn victims Bc of… Depression of immune system, proportional to amount of burn Also affects blood: blood clots when damaged tissue, but instead of clotting at the site, can blot in vein, which blocks blood flow… 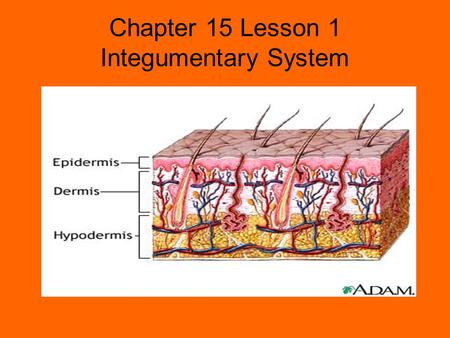 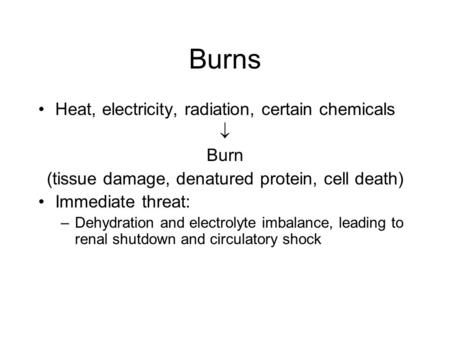 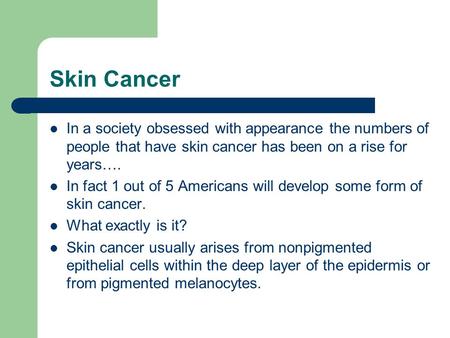 Skin Cancer In a society obsessed with appearance the numbers of people that have skin cancer has been on a rise for years…. In fact 1 out of 5 Americans. 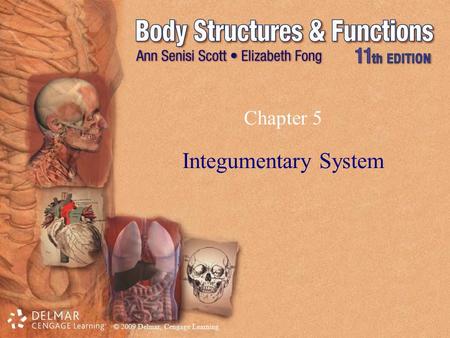 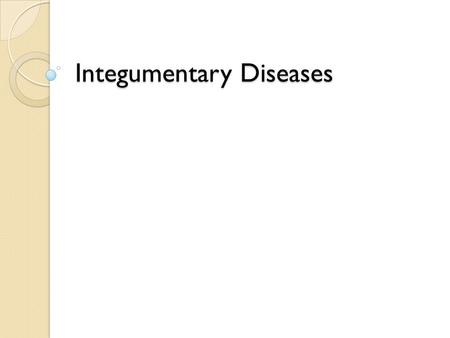 Integumentary Diseases. Acne Acne Description ◦ Acne typically appears on your face, neck, chest, back and shoulders, which are the areas of your skin. 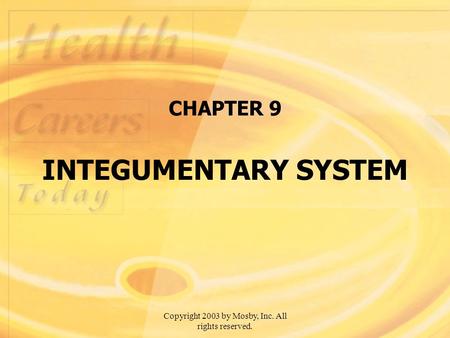 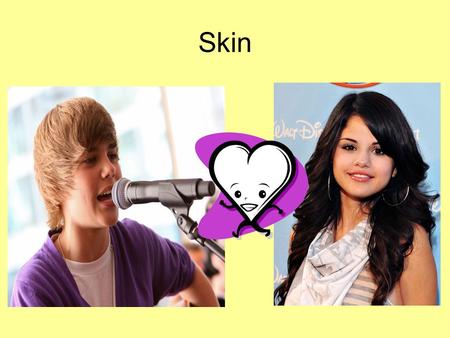 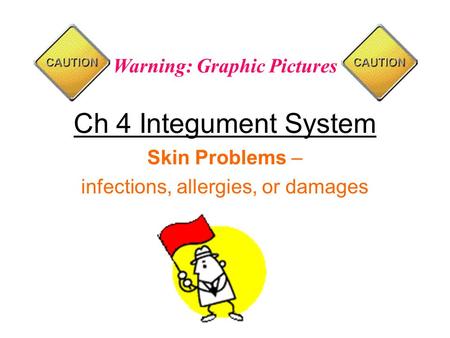 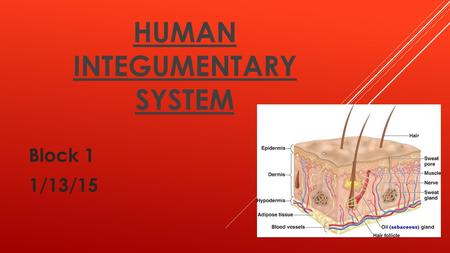 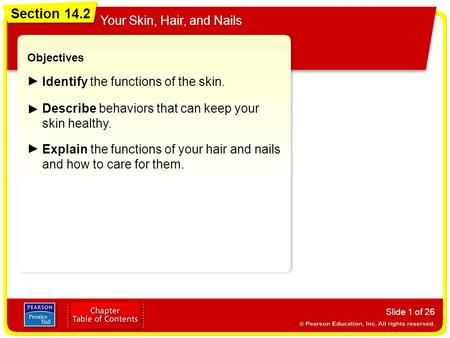 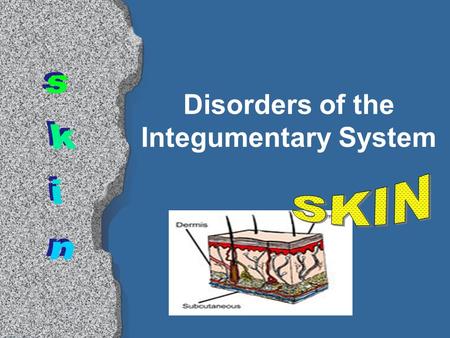 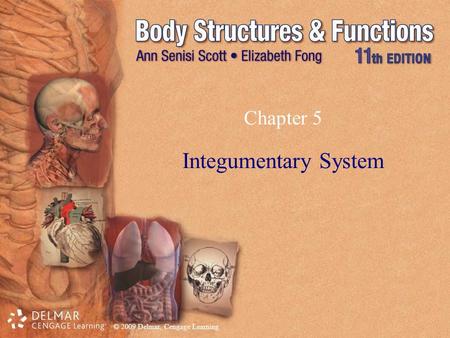 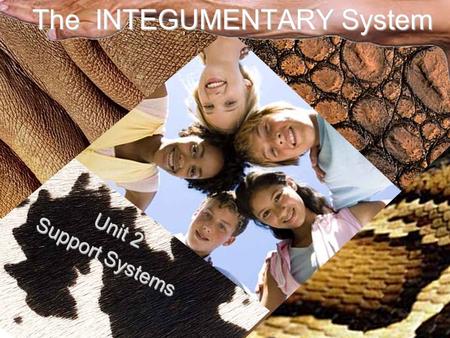 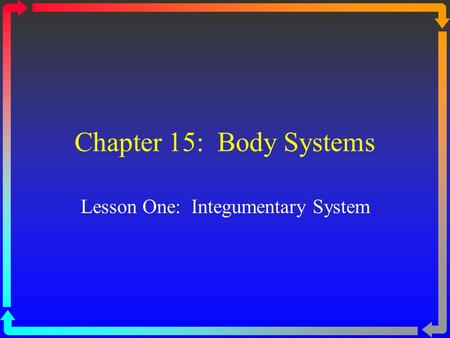 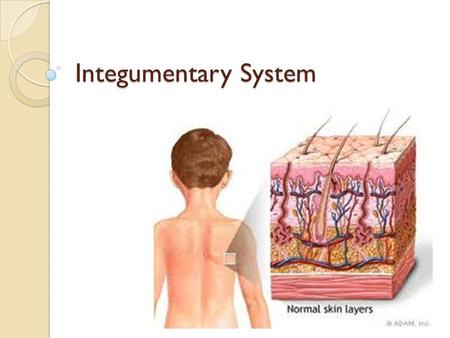 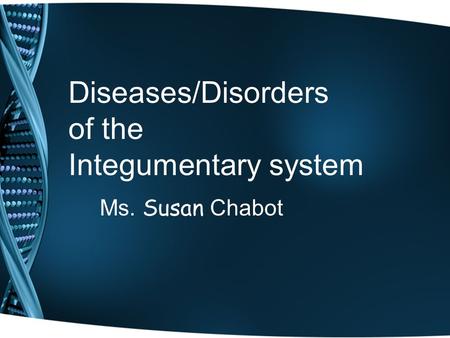 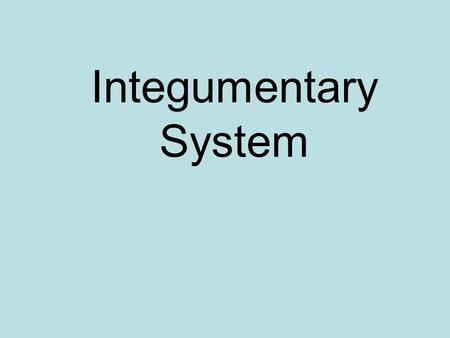 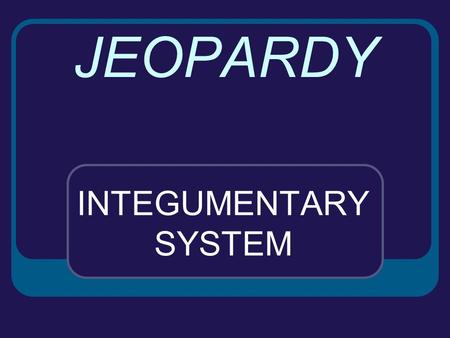 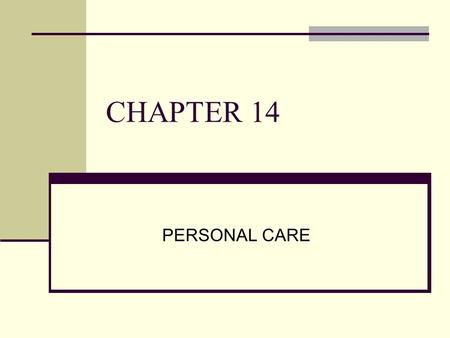 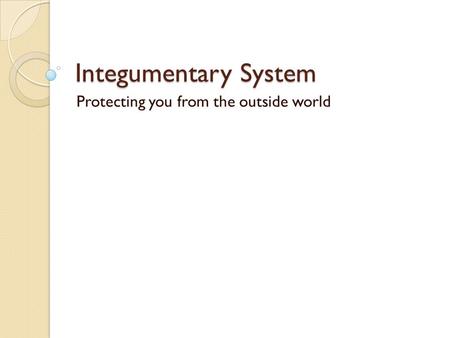 Integumentary System Protecting you from the outside world.