5 TRANSFORMER AND MOTIONAL EMFS
. Connection between emf and electric field (Previous Section), . Link between electric and magnetic fields through Faraday's law (To be explored now) For a circuit with single conductor (N = 1) 1.2 In terms of E and B, equation can be written as 1.3

6 where,  has been replaced by integral B
where,  has been replaced by integral B.ds and S is the surface area of the circuit bounded by the closed path L. It is clear from eq. (1.3) that in a time-varying situation, both electric and magnetic fields are present and are interrelated. The variation of flux with time as in eq. (1.1) or eq. (1.3) may be caused in three ways:

9 This is one of the Maxwell's equations for time-
varying fields. It shows that the time varying E field is not conservative ( x E  0). This does not imply that the principles of energy conservation are violated. The work done in taking a charge about a closed path in a time-varying electric field, for example, is due to the energy from the time-varying magnetic field.

10 B. MOVING LOOP IN STATIC B FIELD (MOTIONAL EMF)
When a conducting loop is moving in a static B field, an emf is induced in the loop. Force on a charge moving with uniform velocity u in a magnetic field B is Fm = Qu x B Motional electric field Em is defined as 1.8

11 Considering a conducting loop, moving with uniform velocity u as consisting of a large number of free electrons, the emf induced in the loop is 1.9 This type of emf is called Motional emf or flux-cutting emf (It is due to motional action) It is the kind of emf found in electrical machines such as Motors, Generators and Alternators.

12 C. MOVING LOOP IN TIME-VARYING FIELD
This is the general case in which a moving conducting loop is in a time-varying magnetic field. Both transformer emf and motional emf are present. Combining equation 1.4 and 1.9 gives the total emf as 1.10 1.12

14 But the divergence of the curl of any vector field is
identically zero. Hence,  . ( x H) = 0 =  . J The continuity of current requires that 1.15 Thus, equations 1.14 and 1.15 are obviously incompatible for time-varying conditions. We must modify equation 1.13 to agree with equation To do this, add a term to equation 1.13, so that it becomes

16 or 1.19 Substituting eq into eq results in 1.20 This is Maxwell's equation for a time-varying field. (based on Ampere's circuit law) where, Jd = D/t is known as displacement current density and J is the conduction current density

17 Fig. 3: Two surfaces of integration
showing the need for Jd in Ampere’s circuit law The insertion of Jd into eq was one of the major contribution of Maxwell. Without the term Jd, electromagnetic wave propagation (radio or TV waves, for example) would be impossible. At low frequencies, Jd is usually neglected compared with J. However, at radio frequencies, two terms are comparable.

19 PROBLEM 1: A parallel-plate capacitor with plate area of 5cm2 and plate separation of 3 mm has a voltage 50 sin 103t V applied to its plates. Calculate the displacement current assuming  = 2 0. Solution: Hence, which is the same as the Conduction current, given by = cos 103 t nA

23 where,  = Volume charge density (C/m3)
So, By definition, where, The volume integrals are equal, only if their integrands are equal. Thus,  . J =

27 MAXWELL’S EQUATIONS FOR STATIC FIELDS
Maxwell’s Equations for static fields are: As the fields are static, all the field terms which have time derivatives are zero. i.e., 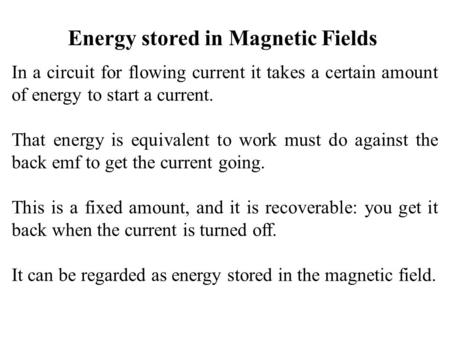 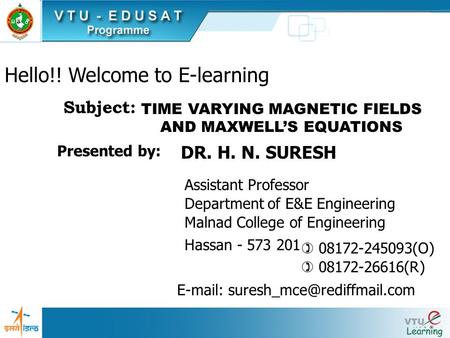 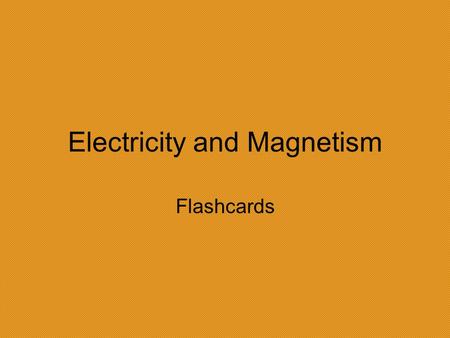 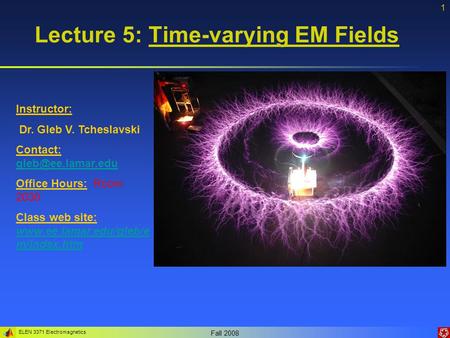 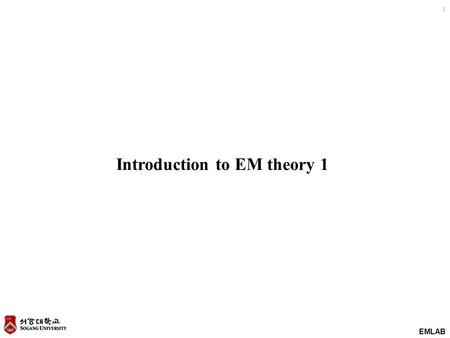 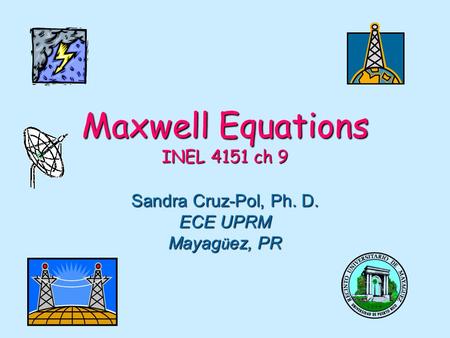 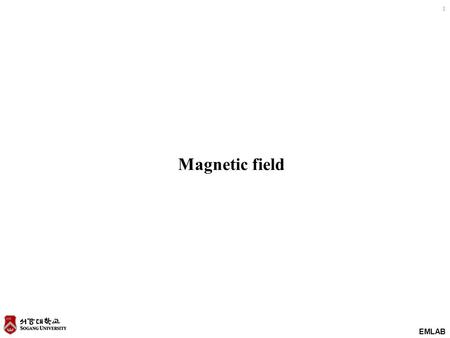 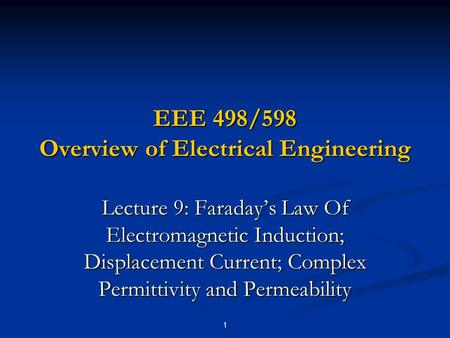 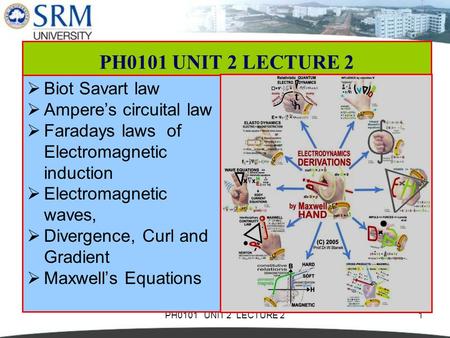 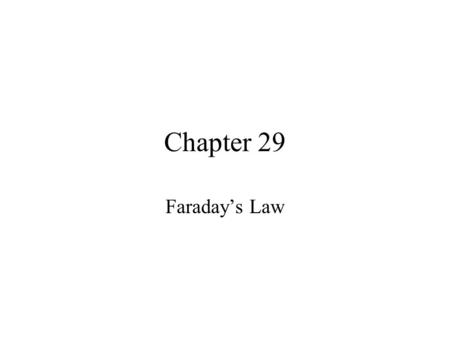 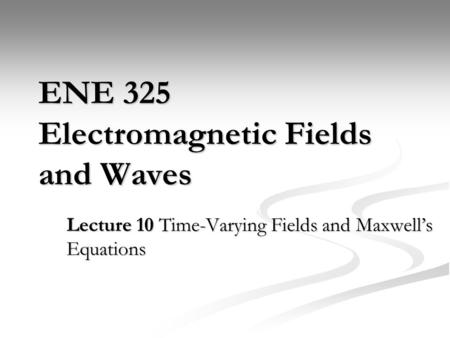 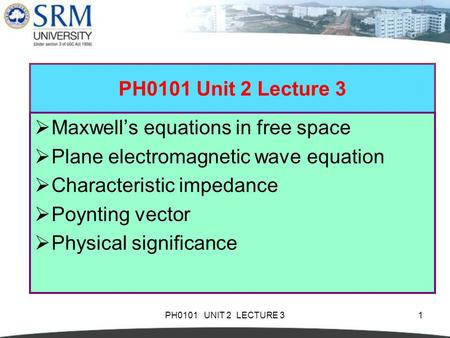 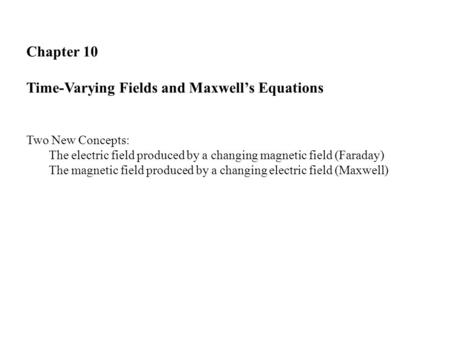 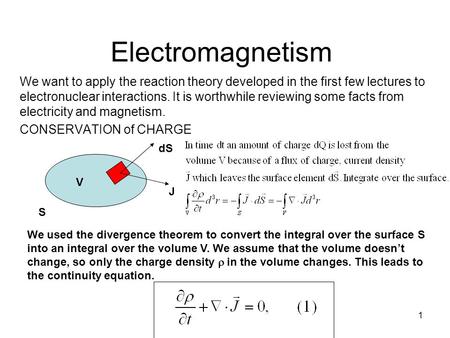 1 Electromagnetism We want to apply the reaction theory developed in the first few lectures to electronuclear interactions. It is worthwhile reviewing. 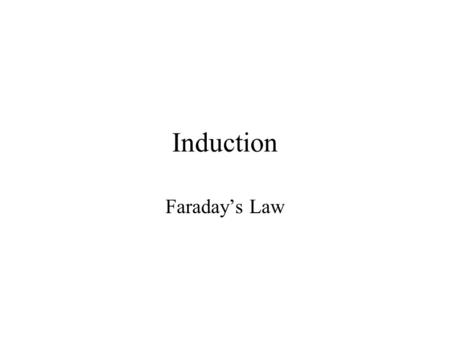 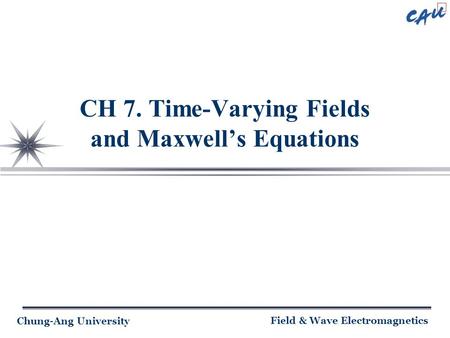 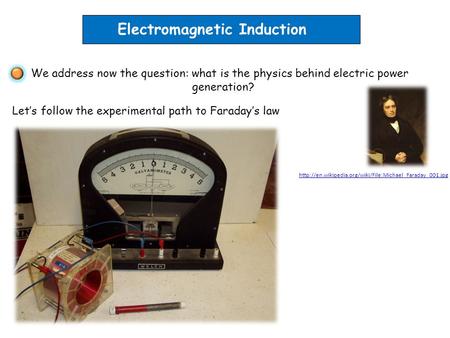