5 Electric Field Don’t have to touch to feel a charge.
An electric field surrounds all charged objects. Electric forces act at a distance because or this field.

6 Static Electricity Static means not moving
Static electricity is electricity at rest Friction can cause it Objects rub together and electrons move from one object another.

12 Induction Rod with negative charge
Pushes electrons in electroscope down

22 Static discharge Eventually static electric charge will move.
Slowly the electrons may move into moisture in the air Or quickly in a spark.

24 Electric Current Electrons in motion.
Current: The number of electrons that pass a specific point in a circuit in one second Voltage: how hard the electrons are being pushed. Circuit: electric current flows through a closed, continuous path.

27 Measuring Electricity
Current: The number of electrons that pass a specific point in a circuit in one second Measured in Amperes or amps (A) Voltage: how hard the electrons are being pushed Measured in volts (V) Higher voltage, the more work the electrons can do.

29 Ohm’s Law The relationship among current, voltage, and resistance. Ohm’s law states that the current in a circuit is equal to the voltage divided by the resistance I = V R V I R

30 Do the Math A car has a 12 volt system. The headlights are on a 10 amp circuit. How much resistance do they have? Your house uses 120 volts. What amount of current would flow through a 20 ohm resistor?

31 Circuits For current to flow there must be a complete loop
Electric circuit: complete, a closed path through which electrons travel. Electrons flow from negative to positive terminal Work is done if there is a resistance in the wire.

32 Circuits Resistance is supplied by a resistor.
A resistor is a device that uses electric energy to do work. A wire connected from the resistor to the positive terminal completes the circuit. An open switch breaks the circuit.

38 Parallel Circuit Parallel circuits: The electrons in a parallel circuit can travel through more than one path, each path is separate. If there’s a break in one path in the circuit, electrons can still flow through the other paths and maintain a complete circuit.

41 Parallel circuits in your home allow each light or appliance to use the amount of current it needs to work. A parallel circuit prevents all the lights or appliances from shutting off when one of them stops working.

42 Electric power and energy
Power: The rate at which electricity does work or provides energy The amount of electric power a device uses to do work is determined by its resistance. P = V x I (P) power = (V) voltage x (I) current in the circuit.

44 Electric safety Many appliances are equipped with a “ground” wire on the plug. The ground wire prevents electric shock. The rounded third prong of a three-way electric plug is attached to the ground wire. It constantly moves static electricity from the appliance to the ground.

45 Broken wires or water can cause electric appliances to short-circuit.
A short circuit occurs when electricity takes a short path and bypasses the resistors in the circuit. Because of this the resistance of the circuit is less and the circuit wire increases. The increased current can produce enough heat to melt wires and start a fire, or cause serious electric shock.

46 Circuit protectors Fuses and circuit breakers protect against overloaded circuits. A number on the fuse indicates the max. current that will flow through it. Circuit breakers are often used in place of fuses.A circuit breaker is a switch that opens automatically when electric current in a circuit reaches its max. 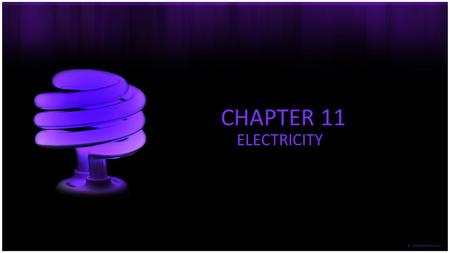 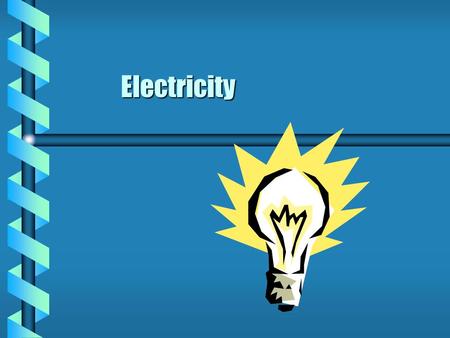