3 HOT DEBATE!!! Let’s see how much you ALREADY know!
Read and discuss the Hot Debate on page 4 with a partner. Be prepared to discuss your answer. You have 5 minutes!

4 1. WHAT IS LAW??? Laws: enforceable rules of conduct in a society
Reflect the culture and circumstances that create them Code: laws are grouped into organized form King of Babylon 4000 years ago Code of Hammurabi – SAME law principles

5 2. Stages of Growth of Law: How Legal Systems are Formed
Individuals take revenge for wrongs done to them Awards of money or goods are substituted for revenge Court systems are formed  to hear the injured A central authority figure intervenes to prevent and punish wrongs issues laws

7 Stage 2: Awarding $$ Sovereign – the powerful person from Stage 1 then goes on to award money or goods as a substitute for revenge

8 Stage 3: Forming Courts Elders or priests generally preside over these courts Sovereign presides over the most important cases

9 Stage 4: Prevention The sovereign:
Uses the courts to prevent problems from arising Issues laws to punish behaviors that injure others

10 3. Common Law vs. Positive Law
Reflects the wisdom, or lack thereof, of their creators Should be: predictable and flexible Laws based on current standards or customs of the people Positive law: Laws dictated by central authority to prevent disputes and wrongs Very inflexible

12 5. Equity: An Alternative to Common Law
Common laws follow precedent (use prior cases to help determine new cases). Disadvantage of common law: you had to wait until injury actually occurred to take legal action Equity Law (meaning FAIR): You can take legal action to prevent wrongdoings Injunction – an order that prohibits something from being done

15 Quick Content Check! List the 4 stages of how the legal system evolved. What are some differences between common law and positive law? Describe the difference between law courts and equity courts.

16 TO DO LIST: Page 8: Questions, 1, 2, 4, 6, 7, 8 Stages of Law Cartoon
Create a cartoon strip depicting the FOUR stages of growth of law. Use paper, pencils, markers or technology provided. Your cartoon strip MUST include AT LEAST 4 slides Make sure to accurately represent EACH stage of growth!!!

20 Types of Laws What types of laws do you follow on a daily basis?

21 Statutes: laws enacted by state and federal legislatures
Give 3 examples! Ordinance: legislation at the local level

23 In This Case, page 10 Case law
Usually made after a trial has ended and one of the parties has appealed the result to a higher court (but the Supreme Court can change its mind later!) Appellate court (court that hears the appeal) publishes its opinion on the case used in future similar court cases Stare decisis: legal doctrine that requires lower courts must follow established case law in deciding similar cases In This Case, page 10

26 9. Law and Validity Courts are NOT the final authority on effect of statutes Legislative bodies can nullify a court’s interpretation by abolishing or rewriting it People have power to amend constitution 16th amendment income taxes 21st amendment repeal of prohibition

28 10. Criminal vs. Civil Laws:
Civil laws: group of laws that redress wrongs against individual persons / property When private legal rights or property of an individual are violated defendant loses liable (must compensate) Criminal Law: when citizen’s right to live in peace is violated Crime: offense against society Acting in the name of the people, gov investigates wrongdoing and will prosecute Loss = Conviction Crime may be both civil and criminal  OJ Simpson

31 Percentage of students in grades 9-12 who reported carrying a weapon at least 1 day during the previous 30 days, by location and sex: Various years,

32 The U.S. is world’s leading incarcerator
U.S. rate of incarceration of 941 inmates per 100,000 population record high The U.S. now locks up its citizens at a rate SIGNIFICANTLY higher than that of other industrialized nations For every 100,000 population: 139 in England/Wales 116 in Canada 91 in Germany 85 in France

33 11. Procedural vs. Substantive Laws:
Procedural law: deals with methods of enforcing legal rights and duties Specify how and when police can make arrests and what methods can be used in trial Determine equitable remedies Examples Substantive law: defines YOUR rights and duties All rules of conduct for citizens Defines offenses murder, theft, vehicular homicide, breach of contract, negligence

34 12. Business Law: Covers all business situations and transactions
Most business transactions involve merchant and consumer Concerned mostly with civil law, especially contracts Tort: unintentional violation of another person’s rights, usually due to negligence. This is a form of civil offenses and damages can be recovered. May also be governed by criminal law Laws vary from state to state must be constitutional Uniformity is becoming more and more important!!! 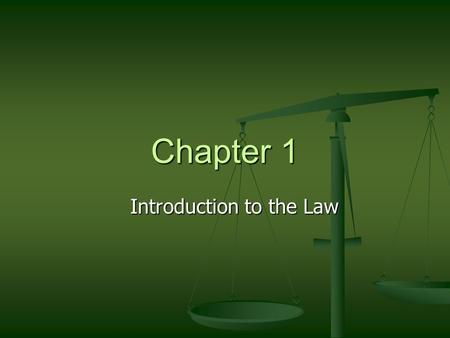