3 Lesson 1-1 Our Laws & Legal System
Laws & Code – reflect culture that creates them The need for laws has always existed; just particular laws have changed. Laws—enforceable rules of conduct Code—Laws grouped into an organized form. A penal code is a portion of a state's laws defining crimes and specifying the punishment. Other codes-- traffic code , building safety code, or laws addressing environmental resources by regulating hunting, fishing, or forestry.

5 4 Stages in the Growth of Law
Individuals take revenge for wrongs done to them. Example—gang related shooting/revenge… this disrupts normal routine of people and harms innocent bystanders. Leads to one individual (sovereign) seizing pwer to bring peace to society. Another example—Lord of the Flies Awards of money or goods are substituted for revenge. Sovereign brings about this second stage of law by awarding $ or goods. (fines, court awards, etc)

6 4 Stages in the Growth of Law
3. Court systems are formed. Sovereign forms court, where people can go to be heard when severely injured by another. 4. A central authority figure (sovereign) intervenes to prevent and punish wrongs. Sovereign uses the courts to prevent problems from arising and can issue laws to punish behavior that injure others.

8 Common Law v. Positive Law
Common Law—Law based on the current standards or customs of the people. Positive Law—Law dictated or set down by a sovereign or other central authority to prevent wrongs from occurring. The best system of laws gradually evolves towards a form that is most appropriate to the current standards of the people. Laws should be predicable…if not, chaos, unrest and replacement of system Example—Taliban overthrown in Aghanistan

12 TERMS Precedent – courts use prior cases as a guide for deciding similar new cases. Jurisdiction – the power to decide a case. Equity – basic fairness.

13 Development of English Common Law
Prior to English Common Law, feudal barons in England acted as judges within their territories; laws differed from region to region Around 1150, King Henry II appointed judges who would “ride circuit into countryside holding court in villages. King’s Court based in London was created to hear cases that may have been decided unwisely. The King’s Court took jurisdiction (power to decide case) over the most important cases.

14 Development of English Common Law
Juries developed to decide cases in harmony with the customs of the people. The jury is an institution unique to the English common law system. English common law system has been a model for legal systems worldwide because of its uniformity (precedent-based). Yet it has and ability to adapt to changes in society.

16 What’s Your Verdict? (page 6)
Should the courts intervene in the strike? Who should be punished, the strikers or the workers, or both? What is a fair punishment? Would an injunction limiting the number of picketers be useful?

17 Assignment Either with a partner or individually, research the origins of another country’s legal system. Use primarily the Internet. Prepare a one-two page paper of your findings, including resources used. Additional requirement details given in class.

19 Laws at federal, state, & local levels consist of:
Constitutions—a document that sets forth the framework of a government and its relationship to the people it governs. Supreme Courts are final authorities on the meaning of constitutions.

20 Our Constitution: We the People

21 Constitutions define and allocate certain powers in our society
1. Between people and government At the federal level, the Bill of Rights protects people from actions of their governments. 2. Between state and federal government 3. Among branches of government Checks & balances for executive, legislative & judicial See page 9

22 The Bill of Rights

24 Laws at federal, state, & local levels consist of:
Statutes Laws enacted by legislatures, which are composed of elected representatives of the people. What’s Your Verdict? (page 9) Ordinance—legislation at the local level

27 What happens when laws conflict?
Legal rules for supremacy establish which law is valid and should therefore be enforced. Constitutions are highest source of law. “the supreme law of the land” When a law is invalid because it conflicts with a constitution, it is said to be unconstitutional. QUESTION – If a state constitution & the U.S. constitution conflict, which prevails?

28 Criminal v. Civil Law Criminal Law—Offense against society.
Used when a citizen’s right to live in peace is violated. Acting in the name of ALL people, the government investigates an alleged wrongdoing. Civil Law—Group of laws that redress wrongs against individual persons. Used when the private legal rights of an individual are violated. Note: Both criminal & civil can apply, such as in OJ Simpson case.

33 Evaluating the Law and Being Active in Our Democracy 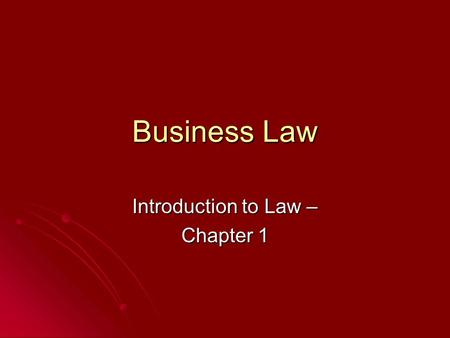 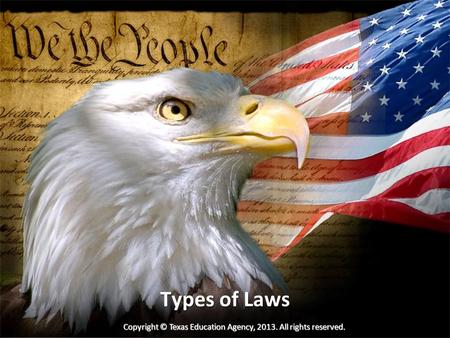 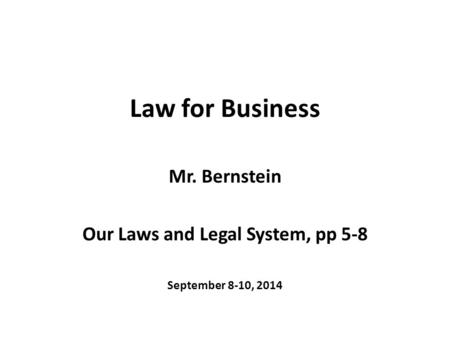