1 What is net force?

2 All the forces acting on an object

3 If the forces acting on an object are going in the same direction, you would _________ them together to get the net force.

5 If the forces are acting on an object are going in opposite direction to each other, you would _________ them together to get the net force.

13 How can we increase acceleration of an object?

17 What is rolling friction?

18 Occurs when an object rolls over another object
Example: bike tire on a road

25 What is the formula for momentum

28 A push or pull on an object

29 How can you increase momentum?

32 The amount of material (matter) in an object

33 How can you increase friction?

34 Make the surfaces rougher
Example: sand on an icy sidewalk

36 The force that pulls objects toward earth

37 What is Newton’s third law and give an example.

38 For every action there is an equal and opposite reaction
Example: a hammer hits a nail and the nail exerts a force back on the hammer

39 If forces on an object are balanced,

40 The object will never change its motion (move)

41 If the forces on an object are unbalanced,

42 There will be a change in the objects motion

43 What is the formula that describes Newton’s 2nd law of motion?

45 What are two factors that affect gravitational pull?

47 On the arrow below, what does the point of the arrow indicate?

48 The direction of the force

49 On the arrow below, what does the length of the arrow indicate?

50 The strength of the force

51 In what direction is the net force acting?

53 From what direction must force be applied so that forces are balanced?

55 If a third force is applied to the object, in what direction will the object move? 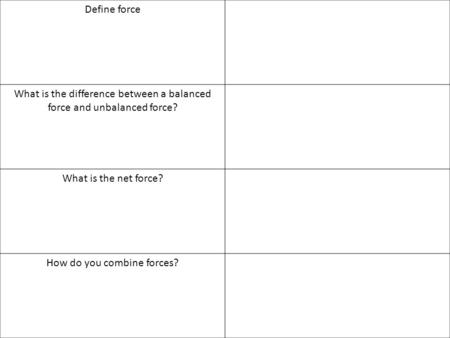 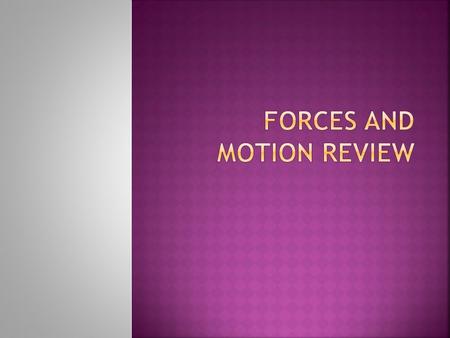