4 Performance Objectives  Students are expected to know that fish is a global commodity of great nutritional values to mankind. .. to know that many fish and shellfish are contaminated with POCs. .. to know what the POC tolerance levels and fish consumption patterns are like for people worldwide.

7 Aquatic Accumulation of POCs  Bottom-dwelling organisms will feed on POC-contaminated particles that are suspended in the aquatic systems.  The contaminated microbes in turn will serve as food for aquatic biota.  Fish consumers can then be exposed to POCs present in these aquatic systems through the biota-human food chain.

9 Toxicities of POCs (I)  Many POCs are found toxic to humans.  The toxicological properties for some of these chemicals have been assessed by the U.S. ATSDR (and WHO).  These assessment documents are each prepared and published by the agency as separate toxicological profiles for the individual chemicals.

10 Toxicities of POCs (II)  Most POCs assessed are classified as at least a possible human carcinogen.  They induce toxic effects on several body systems (liver, kidneys, immune, endocrine, reproductive, and nervous).  PCBs were by far the subgroup most often linked to children’s health by a fair amount of epidemiological data.

11 Tolerances for POCs in Fish  Some health regulatory authorities have set forth health advisories or tolerance limits (ppm) for certain POCs in fish.  These tolerances are largely on wet weight basis, and are > the outdated legal limits set for trade purposes.  Different countries have interpreted or used these tolerance limits differently.

12 Action Levels in the U.S.  Tolerances for pesticide residues in fisheries products are referred to and enforced by U.S. FDA as action levels.  They can use these levels to legally remove the product from the market.  Local authorities and other countries often rely on these action levels to set their own fish advisories.

13 Tolerances in European Union  The European Union has not yet set any tolerances for POC residues in fish.  Instead, they have developed residue limits similar to those by Codex (i.e., on fat basis for meat other than marine).  These residue limits are now coined with the term maximum residue levels (or limits), or MRLs for short.

14 The MRLs Used by Codex  A Codex MRL is the maximum level of (pesticide) residues intended to be legally permitted in/on animal feeds and food commodities.  As OCPs tend to concentrate and stay in fatty tissues, these MRLs may also be used (but with caution) to set health advisories or even legal actions.

22 Fish Consumption Rates (I)  Often times, the consumption rate used for tolerance derivation is insufficient for at least some localities or countries.  For example, average fish consumption in Finland is 15 g/day per capita, whereas in Kiribati is up to 567 g/day.  The actual rates for fish consumers are higher than those based on per capita.

23 Fish Consumption Rates (II)  A per capita rate of 6.5 g/day was used by U.S. EPA to guide the earlier version of action levels set by U.S. FDA.  U.S. EPA currently uses 142.4 g/day for subsistence fishers.  U.S. EPA is also aware that the daily consumption could be up to 600 g per consumer for certain American tribes.

24 Consumption-Related Issues (I)  Complicating the consumption issue further is the potential for misuse of the fat-based Codex MRLs.  For OCPs in meat other than marine mammals, Codex sets the MRLs on fat basis by adopting a daily fat intake of 50 g from their standard diet assumed for meat eaters.

26 MRLs vs. U.S. EPA’s Estimates  The fat-based MRLs derived by Codex thus should be about 7 times lower than that estimated by U.S. EPA.  Such a reduction is appropriate in that the higher fat intake assumed in the Codex diet should be accounted for.  The difference would be greater if U.S. EPA used a lower consumption rate.

27 Issues on Fat Content in Fish  Another issue with tolerance/MRL derivation is the use of 5% by weight as the default fat content in fish.  Certain fish species have much more (or much less) than 5% of fat in their body.  How one should equate the MRLs from two agencies thus would also depend on what fish species are actually consumed.

28 Issues on Fat-Based MRLs  POC residues expressed on the basis of wet weight fish flesh differ empirically from those expressed on fat basis, even after fat or tissue normalization.  Procedures for residue levels measured on fat basis require lipid extraction from meat samples, for which the analytical techniques are far from perfect.

29 Issues on ADIs and RfDs  The ADIs and RfDs used for tolerance derivation are only as meaningful as the toxicity data used which are insufficient.  They also may not have incorporated an adequate safety factor for the higher risk groups (e.g., infants and children).  Nor have they accounted for the potential for synergism or additivity of toxicity.

30 Use of Screening Values  For the prominent POCs, U.S. EPA has updated their screening values intended as threshold levels for provoking more intensive specific-site monitoring.  Values of this type can also be used to provide a rough health risk analysis for consumption of POC-contaminated fish, as illustrated and discussed in Part II. 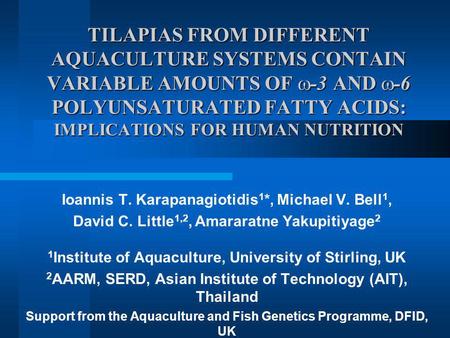 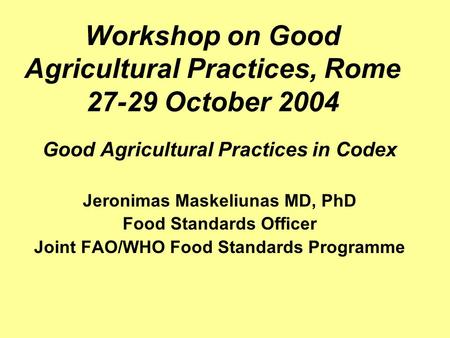 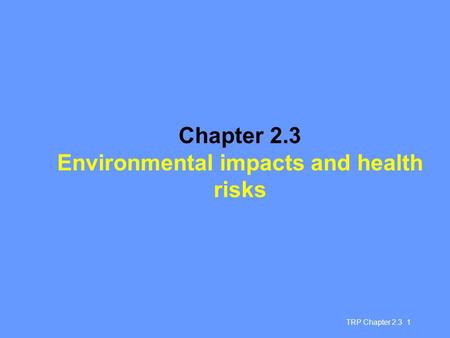 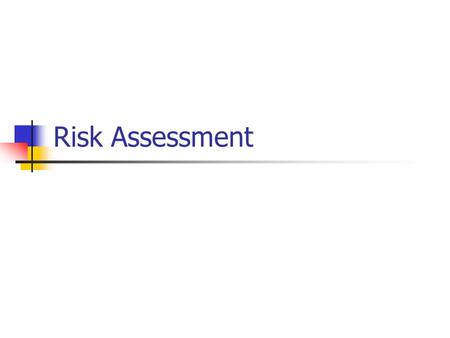 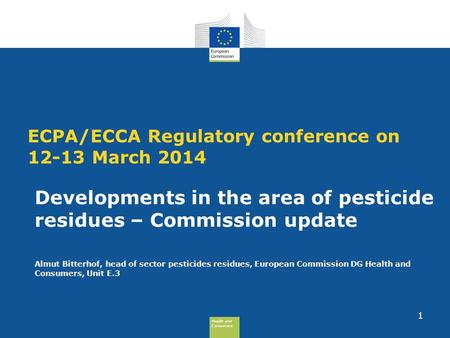 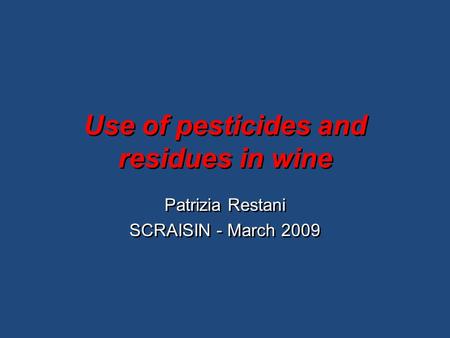 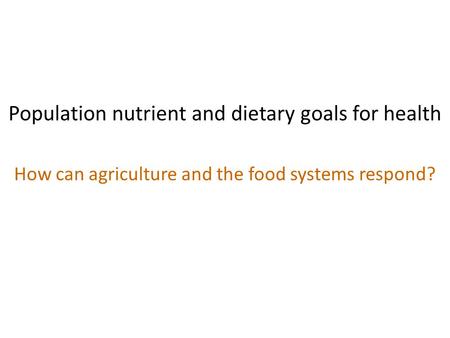 Population nutrient and dietary goals for health How can agriculture and the food systems respond? 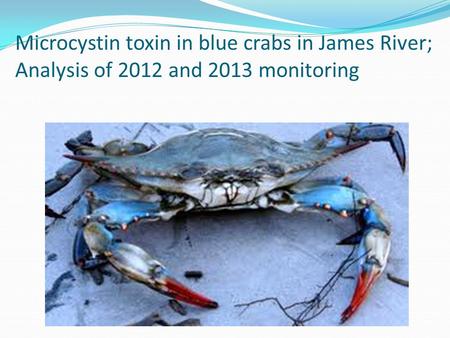 Microcystin toxin in blue crabs in James River; Analysis of 2012 and 2013 monitoring. 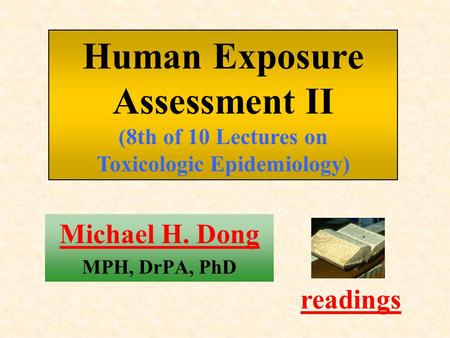 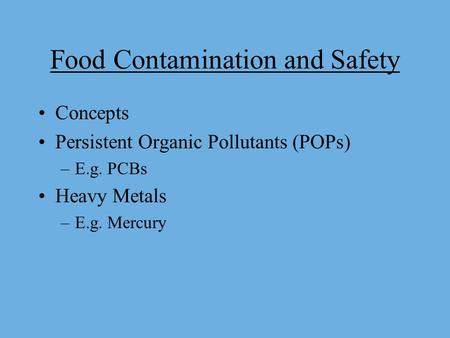 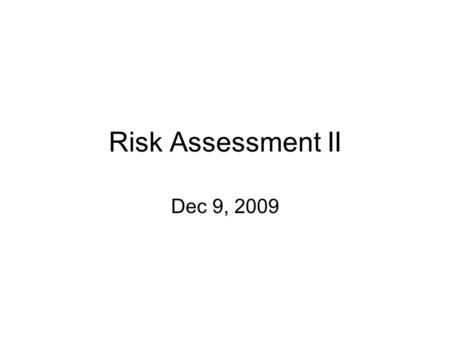 Risk Assessment II Dec 9, Is there a “safe” dose ? For effects other than cancer: 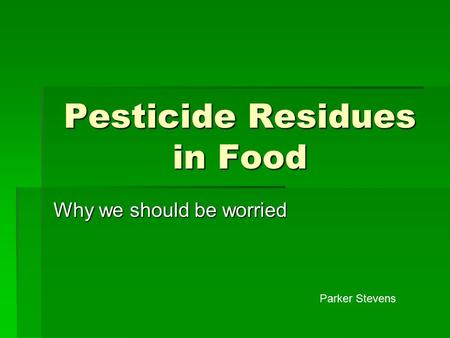 Pesticide Residues in Food Why we should be worried Parker Stevens. 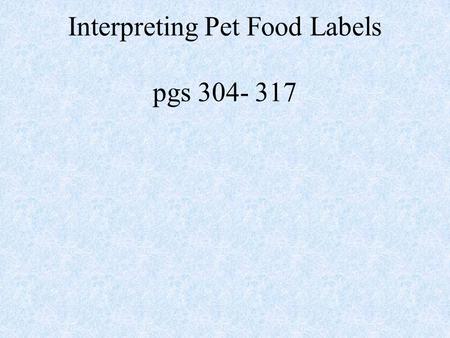 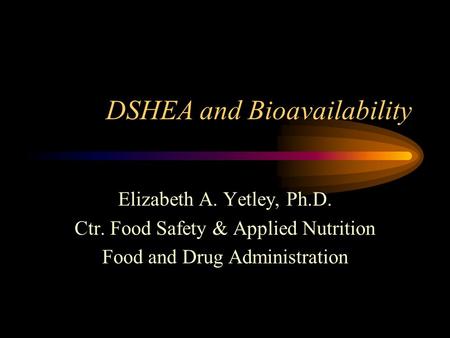 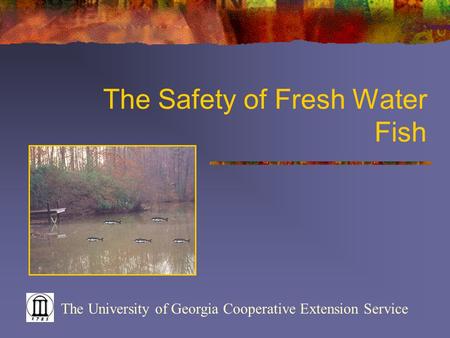 The Safety of Fresh Water Fish The University of Georgia Cooperative Extension Service. 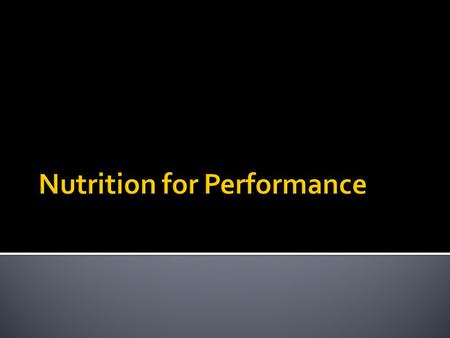  “the provision of the materials necessary (in the form of food) for an organism to support life (growth, maintenance, etc)  Therefore:  “good nutrition” 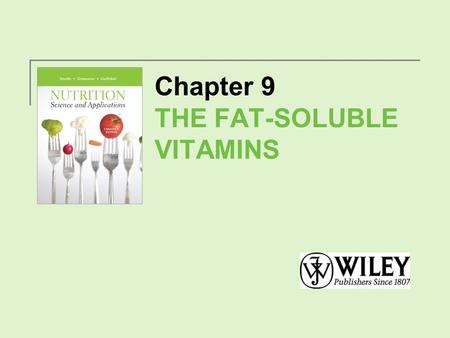 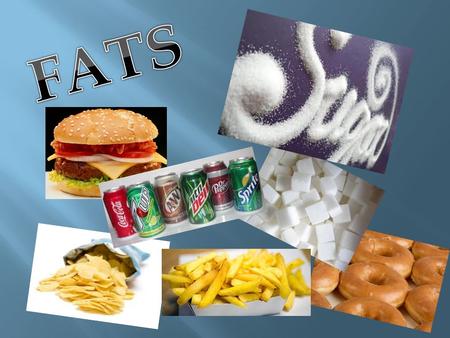 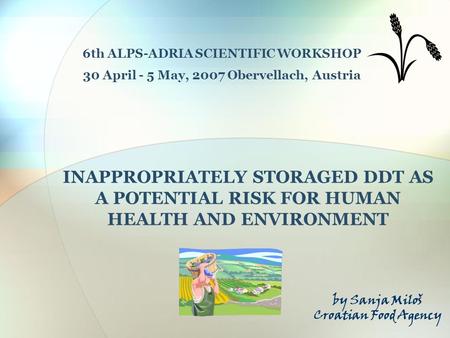