4 Essential Questions 1. In what ways is culture important to human society? 2. What is it like to live in a hunter-gatherer society? How does it compare to the society you live in?

5 Humans’ Basic Needs? 1. What are humans’ basic needs (needed for survival)? 2. How are these needs met in your own lives? 3. How are the different foods that you eat are produced or obtained? 4. What tools and technology are used to obtain, cook, and preserve those foods?

6 Say What? Imagine your life minus the following forms of technological development – electricity, automobiles and other motorized vehicles, running water, metals, and plastics. In other words, imagine what life was like in … the Stone Age! Some people can. Even today, millions of people in developing countries live without electricity, running water, motorized vehicles, etc.

7 How Do We Know? Thanks to Archaeologists and Anthropologists, these social scientists are able to study fossils and artifacts to learn about early humans in the Stone Age.

11 So? What are we able to learn from Otzi and the Lascaux Cave Paintings? Next step, read the handout on the Stone Age and Hunter-Gatherer Societies. Complete the two questions.

12 Stone Age and Ice Age The first humans and their ancestors lived during a long period of time called the Stone Age. The Stone Ages gets its name based on the kinds of tools used at this time – stone tools! Humans also lived during the Ice Age. 2.5 million years ago in Africa to about 3,300 B.C.E. The Stone Age is also divided into three different periods: Paleolithic or Old Stone Age: 2,000,000 BC to 9600 BC Mesolithic or Middle Stone Age: 9600 BC to 7000 BC Neolithic or New Stone Age: 7000 BC to 3000 BC

13 Stone Age The Stone Age is also divided into three different periods:
Paleolithic or Old Stone Age: from the first production of stone artifacts, about 2.5 million years ago, to the end of the last Ice Age, about 9,600 BCE. This is the longest Stone Age period. Mesolithic or Middle Stone Age: begins at the end of the Ice Age, about 9,600 BCE. The Mesolithic period ends when agriculture starts. This is the time of the late hunter-gatherers. Neolithic or New Stone Age: begins with the introduction of farming, dating variously from c. 9,000 BCE in the Near East, c. 7,000 BCE in Southeast Europe, c. 6,000 BCE in East Asia, and even later in other regions. This is the time when cereal cultivation and animal domestication was introduced

14 Ice Age & Migration During the Old Stone Age, climate patterns around the world changed, transforming the earth’s geography. In response to these changes, people began to migrate, or move, to new places. People moving from place to place are called nomadic. About 1.6 million years ago, the earth grew much colder, experiencing long periods of freezing weather. Huge sheets of ice formed from freezing ocean water, covered much of the earth’s land. These freezing times are called the Ice Ages – which ended about 8,000 BCE. As the climate warmed, it made it easier for hunter-gatherers to move. Migration around the world took hundreds of thousands of years – Beginning about 2 million years ago in East Africa. By 9,000 BCE, humans lived on all continents of the world except Antarctica.

16 Hunter-Gatherers As early humans developed tools and new hunting techniques, they formed societies. A society is a community of people who share a common culture. These cultures consisted of languages, religion, art, etc. The early humans of the Stone Age were hunter-gatherers – people who hunt animals and gather wild plants, seeds, fruits, and nuts to survive. These people faced many challenges, however, they learned how to make tools, use fire, and even create art.

17 Hunter-Gatherers Hunter-Gatherers:
Moved from place to place in search of sources of food and suitable shelter, such as cave. Nomadic Society Traveled in small groups, staying in one place only as long as the plants and animals there could supply them with food and clothing. Followed set routes, moving from campsite to campsite over a large territory. Numbers in groups could increase or decrease, changing travel patterns. Some environments were unable to support a larger group. Therefore, a few couples would split off and form a new group looking for new territory.

18 Humans Adapt to New Environments
As early humans moved to new lands, they had to adapt, or change, to their new environments. Clothing and Shelter Animal skins were sewn together to make warmer clothes Caves were an easy form of shelter, however, people began to use whatever resources were available to make shelter = wood, stone, bones, ice, dirt, clay, etc. New Tools and Technologies Fishing hooks, fishing spears, fishing nets, sewing needles, bow and arrow. Make canoes, pottery, kept dogs for protection. Focus: What are the Pros (Good) and Cons (Bad) of Hunter-Gatherer Societies? How does this society compare/contrast with your society? Provide a minimum of three examples for each question.

19 Challenge Working as a group……use the objects given to you to design tools or other objects needed for your survival as a hunter-gatherer. Be prepared to: share your designs be able to explain the many uses for your tools/objects And share any pros (good) or cons (bad) associated with your tools/objects.

21 21st Century Cave Paintings?!
Design your own cave painting. Your cave painting will reflect aspects of your society today. You need to include 5 examples from your society in a visual/illustration. Choices are on the right. Clothing Food Hobbies Dance Music Leisure Activities Technology Family Life Animals Vegetation Natural Landforms 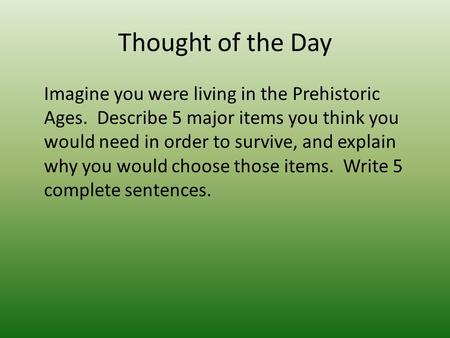 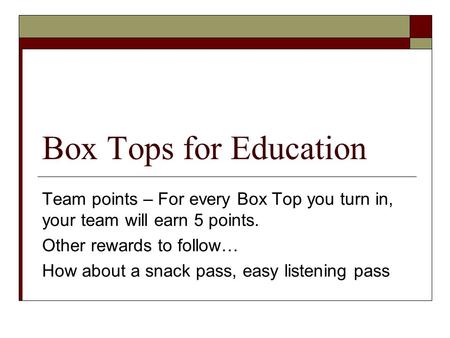 Box Tops for Education Team points – For every Box Top you turn in, your team will earn 5 points. Other rewards to follow… How about a snack pass, easy. 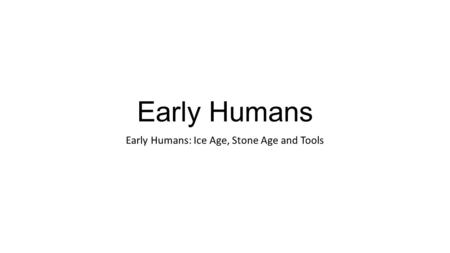 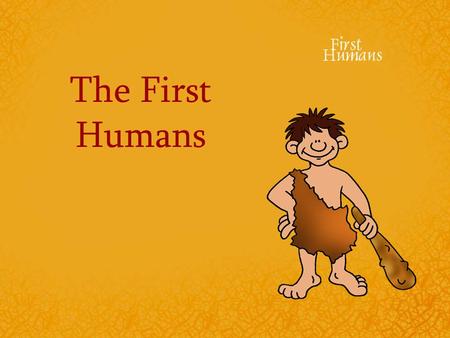 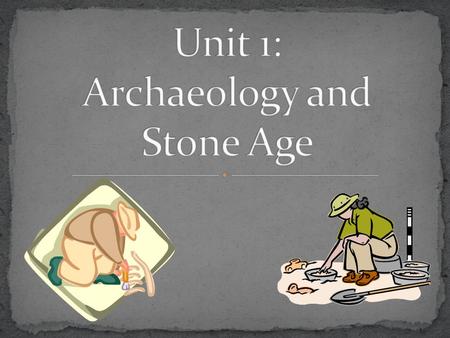 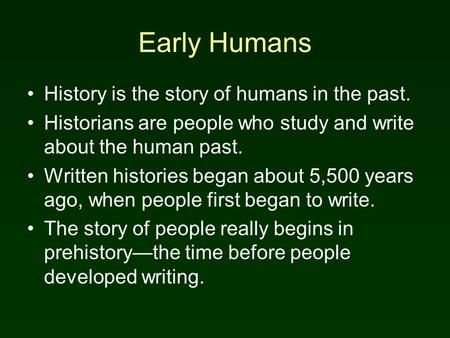 Early Humans History is the story of humans in the past. Historians are people who study and write about the human past. Written histories began about.

Holt McDougal, The First People The Big Idea Prehistoric people learned to adapt to their environment, to make simple tools, to use fire, and to use language.