2 Alcohols What Are Alcohols? Alcohols are organic chemical compounds which form a homologous series. They are compounds in which one or more hydrogen atoms in an alkane (saturated hydrocarbon) are replaced by hydroxyl (OH) groups. The hydroxyl group (OH) is the part of the molecule that is responsible for the characteristic reactions and chemical properties of the alcohol. This is otherwise known as the 'functional group'

3 Ethanol Ethanol is an alcohol, which as we know, is a member of the homologous series. Ethanol can be represented in a number of different forms: C 2 H 5 OH CH 3 CH 2 OH

4 Facts about Ethanol! Ethanol can: Dissolve in water to form a neutral solution. React with sodium to from hydrogen. Burn in air. Be used as fuels and solvents, and is the main alcohol in alcoholic drinks! Ethanol can be oxidised to ethanoic acid (by chemical oxidising agents or microbial action).

5 So what does Ethanol look like? The molecular structure of ethanol looks like this: The ‘OH’ part of Ethanol is sometimes referred to as the functional group!

6 Methanol Methanol is another alcohol, which as we know, is also a member of the homologous series. Methanol can be represented as a formula: CH 3 OH

7 Methanol The molecular structure of methanol look like this: The ‘OH’ part of methanol is sometimes referred to as the functional group!

8 Facts about Methanol Methanol can: Dissolve in water to form a neutral solution. React with sodium to from hydrogen. Burn in air. Be used as fuels and solvents, and is the main alcohol in alcoholic drinks!

9 Carboxylic acid A carboxylic acid is an organic acid that contains one or more carboxyl groups. They usually have higher boiling points than water and are usually quite weak acids. These longer chain acids tend to be rather soluble in less- polar solvents such as ethers and alcohols.

12 Esters Esters are chemical compounds made by condensing acids with alcohols. Esters with low molecular weight are commonly used as fragrances and found in essential oils and pheromones.

13 Making an Ester Ethyl ethanoate is synthesized in industry mainly via the classic Fischer esterification reaction of ethanol and acetic acid. This mixture converts to the ester in about 65% yield at room temperature: CH 3 CH 2 OH + CH 3 COOH ⇌ CH 3 COOCH 2 CH 3 + H 2 O The reaction can be accelerated by acid catalysis and the equilibrium can be shifted to the right by removal of water. It is also prepared in industry using the Tishchenko reaction, by combining two equivalents of acetaldehyde in the presence of an alkoxide catalyst: 2 CH 3 CHO → CH 3 COOCH 2 CH 3

14 What do esters look like? -Ethyl ethanoate- Ethyl ethanoate is the organic compound with the formula CH 3 COOCH 2 CH 3. This colourless liquid has a characteristic sweet smell and is used in glues, nail polish removers, decaffeinating tea and coffee, and cigarettes. The ‘COO’ part of ethyl ethanoate is sometimes referred to as the functional group! 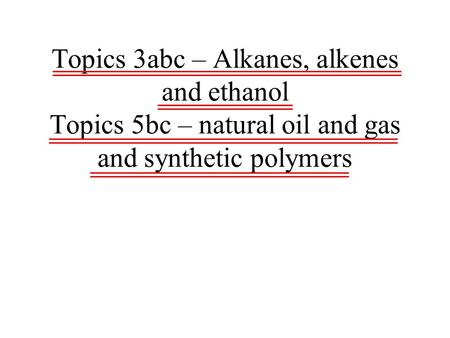 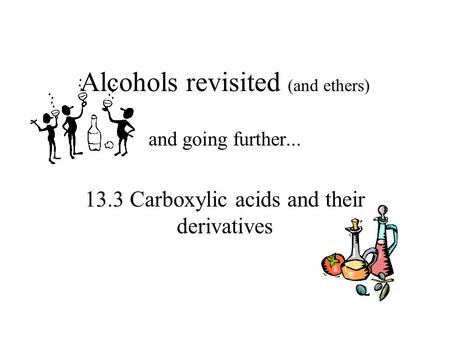 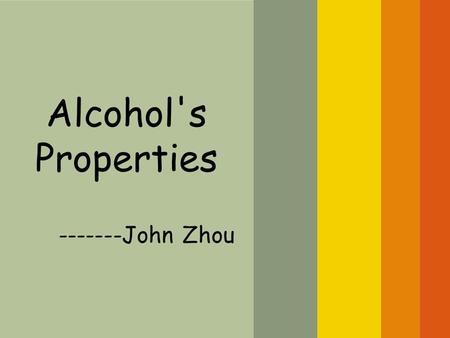 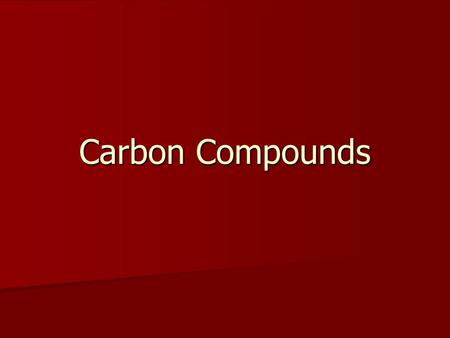 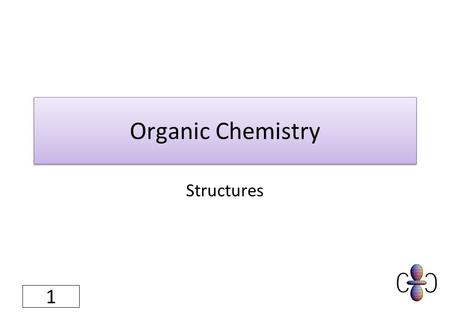 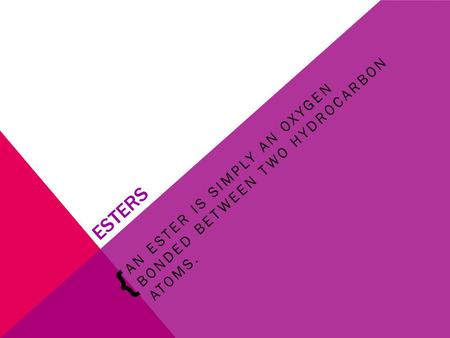 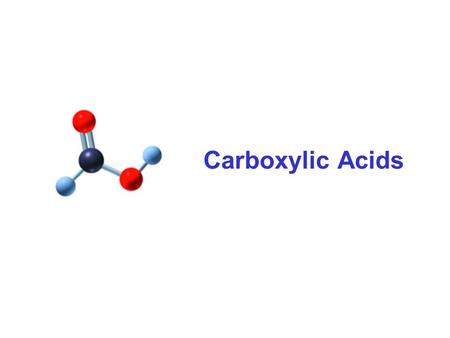 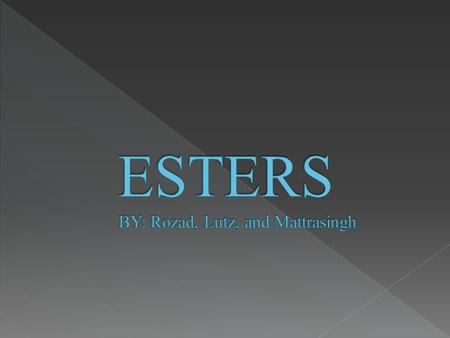 Esters are derivative from acids, prepared by the reaction of a Carboxylic acid and an alcohol. A way to distinguish esters from other organic families. 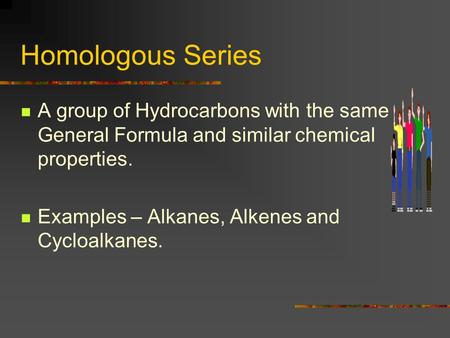 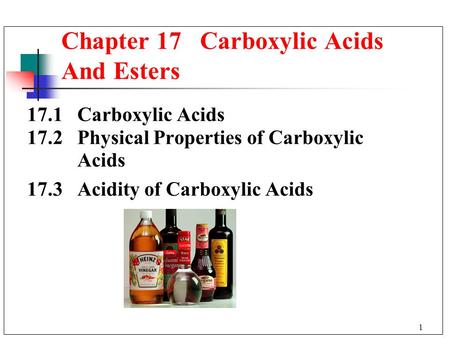 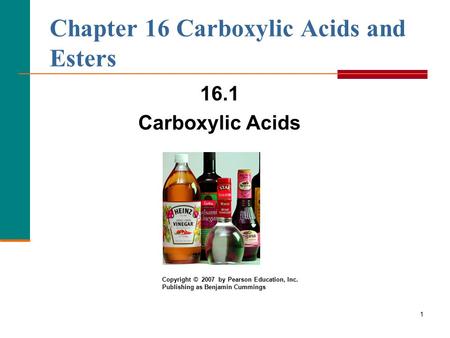 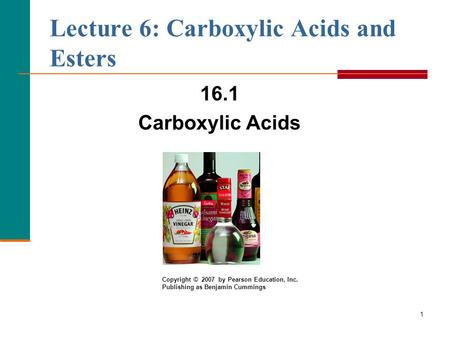 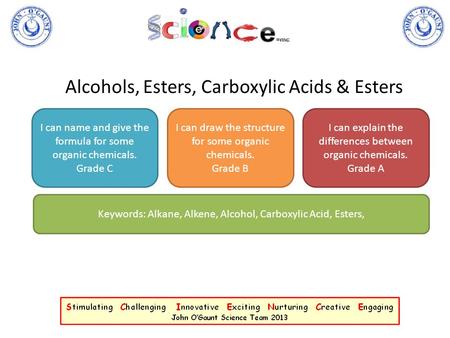 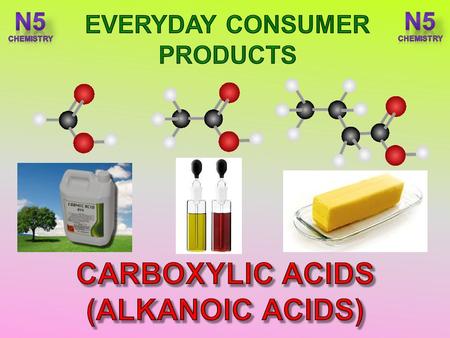 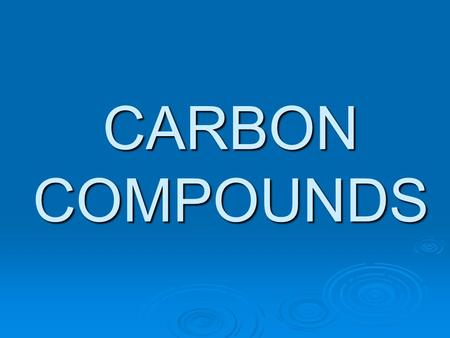 CARBON COMPOUNDS. ORGANIC COMPOUNDS  The compounds of carbon( except the oxides of carbon, carbonates, hydrogen carbonates and carbides) are called organic. 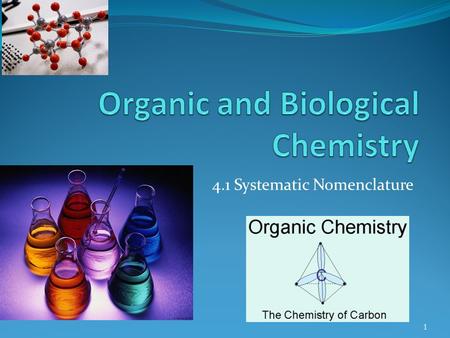 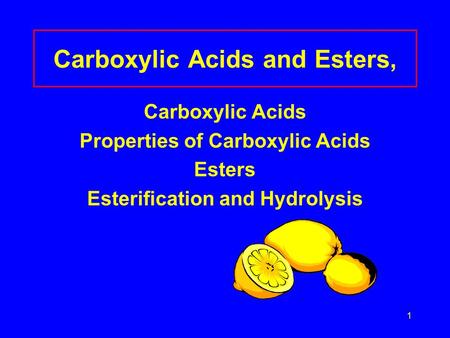 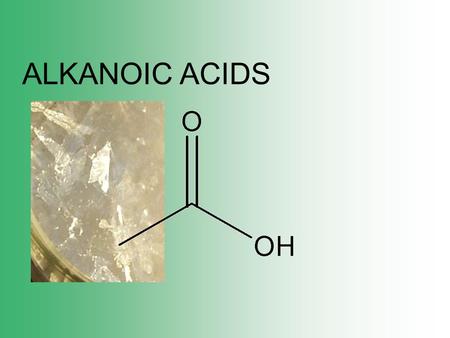 ALKANOIC ACIDS. An alkanoic acid is a compound that has the general structure. 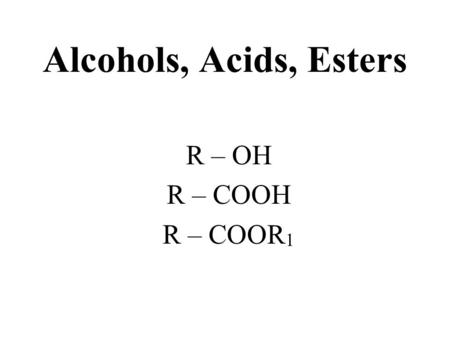