3 Warhol and The 60’s The 1960s was an extremely prolific decade for Warhol. Warhol’s images came from popular culture. Warhol created many paintings that remain icons of 20th-century art, such as the Campbell's Soup Cans, Disasters and Marilyns. Warhol began silk screening his images in order to mass produce them.

7 Pop Art A visual art movement that began in Britain in the late 1950’s and spread to America.

9 Pop Art is one of the major art movements of the twentieth century.

10 Characterized by themes and techniques drawn from popular mass culture, such as advertising, comic books and mundane cultural objects. 100 Cans of Soup

11 Pop Art, like pop music, aimed to employ images of popular as opposed to elitist culture in art.

12 Banana, created by Warhol for an Album Cover 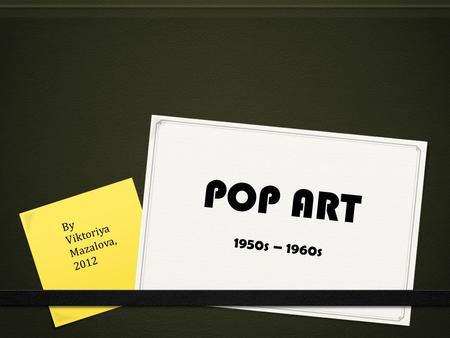