Warhol Biography Andy Warhol was born in Pittsburgh, Pennsylvania in 1928. His parents had only recently moved to the United States from what is now Slovakia.

Presentation on theme: "Warhol Biography Andy Warhol was born in Pittsburgh, Pennsylvania in 1928. His parents had only recently moved to the United States from what is now Slovakia."— Presentation transcript:

2 Warhol Biography Andy Warhol was born in Pittsburgh, Pennsylvania in 1928. His parents had only recently moved to the United States from what is now Slovakia. As a child Warhol, was often sick, or thought he was sick, so he spent a lot of time in bed. During this time, Warhol drew many pictures. He also listened to the radio and collected pictures of celebrities. After studying fine art in college, Warhol moved to New York City and began illustrating for magazines and creating advertisements. He became very popular, especially for his drawings of shoes. During the 1960s, Warhol began creating the paintings he is best known for today. Warhol loved pop culture and he decided to paint what he loved. Warhol painted large pictures of Coca-Cola bottles, Campbell’s soup cans, and dollar bills. He also painted pictures of celebrities. Because he was creating pictures of mass-produced items, Warhol thought it would be fitting to mass produce the artwork. He did this by creating screen prints rather than painting each picture separately. This allowed him to make many copies of each painting, but each copy was an original Warhol painting. Warhol founded “The Factory” which was his studio. At the Factory, he was always surrounded by people. Some of these people were in films that he made, some were writers or artists, some were celebrities. Warhol wanted to create an image for himself and he chose carefully the people in his circle. Andy Warhol was criticized for turning art into a business. Many people didn’t like the idea that he was just making copies of the same picture to sell and make money. Warhol believed in what he was creating, though. He continued to make screen printed paintings of celebrities. Warhol died in 1987. (Wikipedia)

3 Can you believe that a guy can be become famous painting a can of soup?

4 What's great about this country is that America started the tradition where the richest consumers buy essentially the same things as the poorest. You can be watching TV and see Coca-Cola, and you know that the President drinks Coca-Cola, Liz Taylor drinks Coca-Cola, and just think, you can drink Coca-Cola, too. A Coke is a Coke and no amount of money can get you a better coke than the one the bum on the corner is drinking. All the cokes are the same and all the cokes are good. Liz Taylor knows it, the President knows it, the bum knows it, and you know it. - Andy Warhol

5 What is POP ART? It is an art movement that started in the 1950s, first in Britain and later in the United States. Basically, it used images from popular culture and changed them. Andy Warhol is a POP ARTIST.

9 Andy Warhol loved to take the same picture and paint it over and over again. He used a technique called silk screening. Then he used different colour combinations to showcase his idea.

10 How could we use Warhol’s 4-part technique and create our own work? What image would we choose? How could we modernize it?

Download ppt "Warhol Biography Andy Warhol was born in Pittsburgh, Pennsylvania in 1928. His parents had only recently moved to the United States from what is now Slovakia." 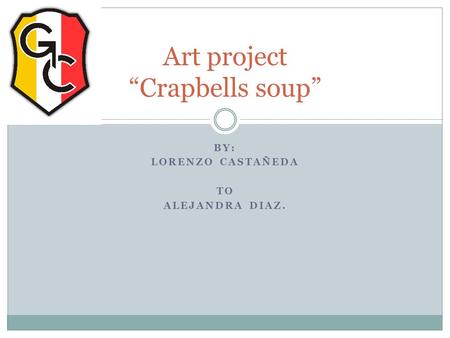