2 INFLUENCES ON CUBISM Paul Cézanne changed styles and habits
Variations of tone and color Geometric shapes: cylinder, sphere, cone Varied approach while revisiting subjects “My one and only master… Cézanne was like the father of us all”. -Pablo Picasso Montagne Sainte-Victoire - Paul Cezanne –06

4 INTRODUCTION TO CUBISM
Cubism is a form of abstract art which emphasizes the two-dimensionality of the canvas. Characteristics: Objects are shown from multiple perspectives at once. Everything is portrayed with geometric shapes. It portrayed a “new way of seeing,” which infused observations and memories into paintings. The Guitar Player – Pablo Picasso – 1910

5 CUBISM-Phases Phases of Cubism
‘’Early Cubism", (from 1906 to 1908) when the movement was initially developed in the studios of Picasso and Braque. "High Cubism", (from 1909 to 1914) during which time Juan Gris emerged as an important exponent. "Late Cubism" (from 1914 to 1921) as the last phase of Cubism as a radical avant-garde movement. 5

7 ANALYTICAL CUBISM Characteristics of Analytical Cubism:
(Or, that period of cubism where it’s really hard to tell what anything is, and who the artist is.) Characteristics of Analytical Cubism: Objects are “analyzed” from many perspectives. Artist incorporates many (if not all) of these perspectives in the painting itself. The painting, instead of directly showing the subject, “evokes a sense of the subject.”

19 OTHER NOTABLES Juan Gris is considered the “Third Musketeer” of Cubism Fernand Léger painted World War II inspired Cubist paintings, which created social commentary of the time he lived in Robert Delaunay spun off of Cubism with “orphism,” which is just cubism with more circles Marcel Duchamp didn’t always paint, but when he did, he painted cubism.

25 PICASSO CUBISM-early years Early Years
Pablo Picasso was born on October 25, 1881 in Malaga, Spain. Picasso’s father José Ruiz y Blasco was also a painter himself. He taught him the basics of formal and academic art training. Picasso attended many art schools during his childhood. He never finished his studies at the Academy of Arts in Madrid, dropping out after only a year. PICASSO

26 PICASSO The Blue Period 1901 - 1904 CUBISM-blue period
Picasso’s Blue Period (1901–1904) consists of somber paintings rendered in shades of blue and blue-green, only occasionally warmed by other colors. In his austere use of color and sometimes doleful subject matter—prostitutes and beggars are frequent subjects—Picasso was influenced by a trip through Spain and by the suicide of his friend Carlos Casagemas. Blindness is a recurrent theme in Picasso’s works of this period, 26

30 PICASSO The Rose Period 1905 - 1906 CUBISM-rose period
In , Picasso's palette began to lighten considerably, bringing in a distinctive beige or "rose" tone. The subject matter also is less depressing. Here are the first appearances by the circus performers and clowns . Picasso met Fernande Olivier, a model for sculptors and artists, in Paris in 1904, and many of these paintings are influenced by his warm relationship with her, in addition to his increased exposure to French painting. 30

31 PICASSO CUBISM-rose period
Picasso's palette brightened, the paintings dominated by pinks and beiges, light blues, and roses. His subjects are saltimbanques (circus people), harlequins, and clowns, all of whom seem to be mute and strangely inactive. The generally upbeat and optimistic mood of paintings in this period is reminiscent of the 1899–1901 period. Shortly after moving to Paris from Barcelona, Picasso began to produce works that were suffused in blue. This particular pigment is effective in conveying a sombre tone. The psychological trigger for these depressing paintings was the suicide of Picasso's friend Casagemas. The Blue Period work is quite sentimental, but we must keep in mind that Picasso was still in his late teens, away from home for the first time, and living in very poor conditions. 31

32 Family of Saltimbanques (1905)
CUBISM-rose period ROSE PERIOD One of the premier works of this period is in Washington, D.C., the National Gallery's large and extremely beautiful Family of Saltimbanques dating to 1905, which portrays a group of circus workers who appear alienated and incapable of communicating with each other, set in a one-dimensional space. Garçon à la Pipe (English: Boy with a Pipe) is a painting by Pablo Picasso. It was painted in 1905 when Picasso was 24 years old, during his Rose Period, soon after he settled in the Montmartre section of Paris, France. The oil on canvas painting depicts a Parisian boy holding a pipe in his left hand and wearing a garland or wreath of flowers. Family of Saltimbanques (1905) Boy with a Pipe 32 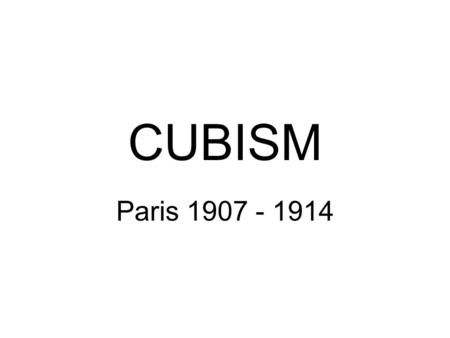 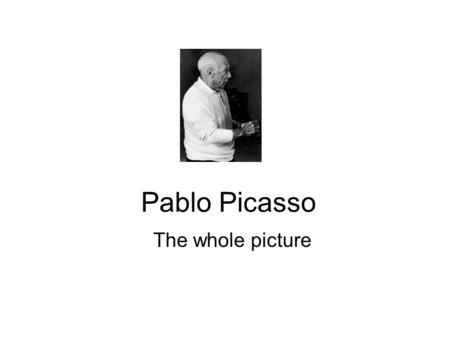 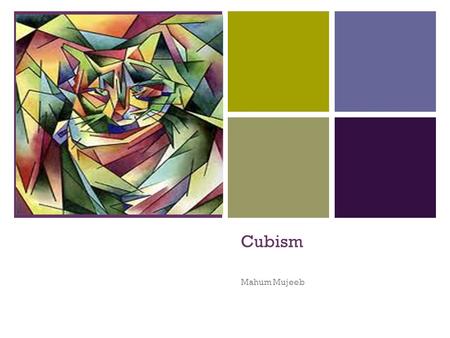