2 The distances to planets are known from Kepler’s Laws
(once calibrated with radar ranging to Venus) How are planet sizes determined? Measure angular size on sky, Then use geometry…..

4 Masses - determined through observing the gravitational effect of the planet on some nearby object (moons, nearby planets, satellites) Density - divide mass by volume Planets orbit the sun counter-clockwise as seen from the North Celestial Pole. All planets are in the same orbital plane EXCEPT Mercury and Pluto.

9 Asteroids - rocks with sizes greater than 100m across
Most asteroids remain in the Asteroid belt between Mars and Jupiter but a few have orbits that cross Earth’s path. Three asteroids hit the Earth every 1 million years!

11 Asteroid sizes range from 100m to about 1000km
They are composed of carbon or iron and other rocky material. The Asteroid belt is a group of rocks that appear to have never joined to make a planet. Why do we think this? Too little mass to be a planet Asteriods have different chemical compositions It’s all Jupiter’s fault…..

13 Meteoroids – interplanetary rocky material smaller than 100m (down to grain size).
called a meteor as it burns in the Earth’s atmosphere if it makes it to the ground, it is a meteorite Most meteor showers are the result of the Earth passing through the orbit of a comet which has left debris along its path

15 Comets Dirty snowballs - dust and rock in methane, ammonia and ice
All light is reflected from the Sun - the comet makes no light of its own Halley’s Comet in 1986 The nucleus is a few km in diameter

17 Formation of the Solar System
Any theory to describe the formation of our Solar System must adhere to these facts: Each planet is isolated in space The orbits are nearly circular The orbits of the planets all lie in roughly the same plane The direction they orbit around the Sun is the same as the Sun’s rotation on its axis The direction most planets rotate on their axes is the same as that for the Sun The direction of a planet’s moon orbits is the same as that planet’s direction of rotation The Terrestrial planets are very different from the Jovian planets Asteroids are different from both types of planets Comets are icy fragments that don’t orbit in the ecliptic plane

18 Nebular Theory for Solar System formation
Our sun and the planets began from a cloud of dust and gas (nebula) As the cloud contracts under its own gravity, the Sun is formed at the center. The cloud starts to spin and the smaller it contracts, the faster it spins. Conservation of angular momentum Cloud forms a flattened, pancake shape.

19 We’ve seen these disks around other young stars!
Beta Pictoris

21 Condensation Theory for Planet Formation
The gas in the flattened nebula would never eventually clump together to form planets. Interstellar dust (grain-size particles) lies between stars - remnants of old, dead stars. These dust grains form condensation nuclei - other atoms attach to them to start the “collapsing” process to form the planets in the gas cloud.

22 What happened next….. A flattened solar nebula disk exists after cloud spins and contracts Condensation nuclei form clumps that grow into moon-size planetesimals Solar wind from star formation (Sun forming) blow out the rest of the gas Planetesimals collide and grow Planetesimals form the basic planets over hundred million years

23 Why the difference between inner and outer planets?
TEMPERATURE! Rocky inner planets: The type of the material that condensed out of the nebular cloud at these higher temperatures was rocky in nature. Gaseous, Bigger outer planets: Both rock and gas could condense out of the cloud at lower temperatures where these planets formed. Why are they gaseous? - gas is present Why are they bigger? - accretion onto the planet starts sooner because they are further from the Sun, less effected by solar wind 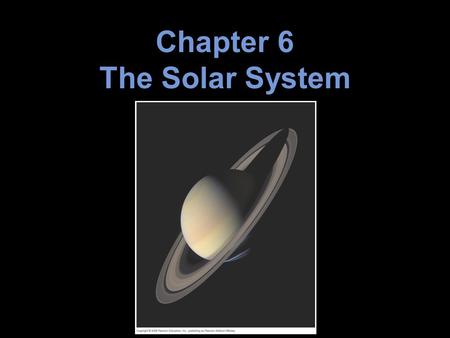 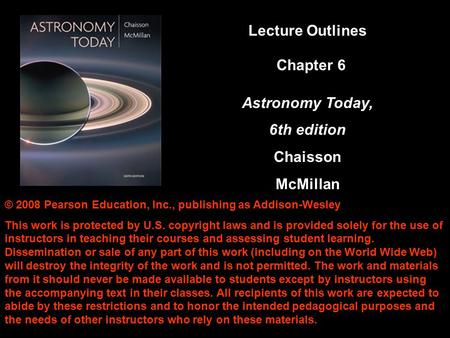 © 2008 Pearson Education, Inc., publishing as Addison-Wesley This work is protected by U.S. copyright laws and is provided solely for the use of instructors. 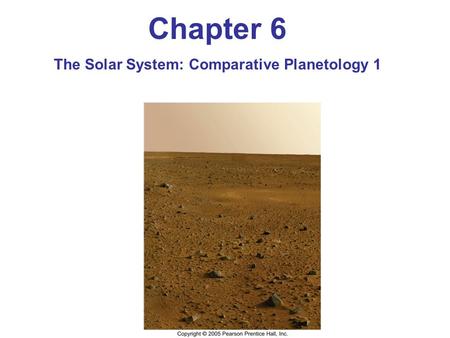 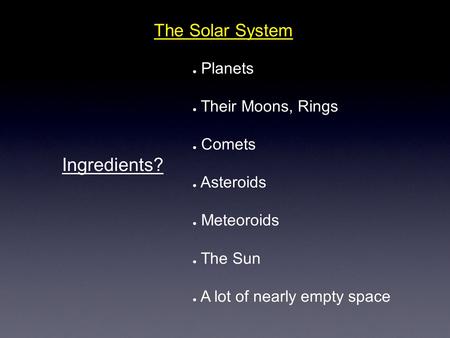 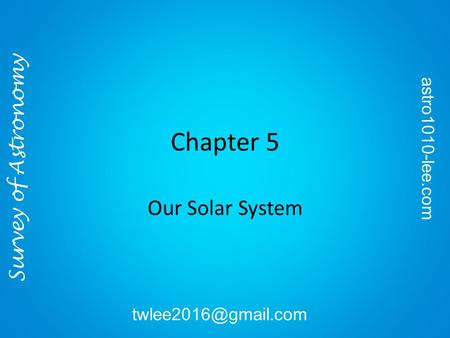 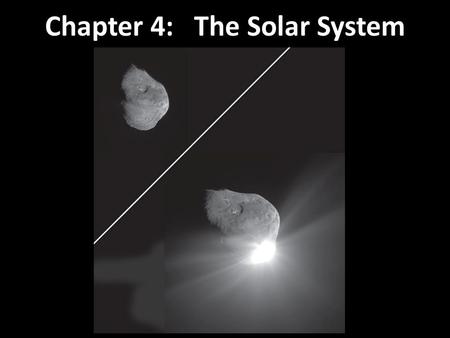 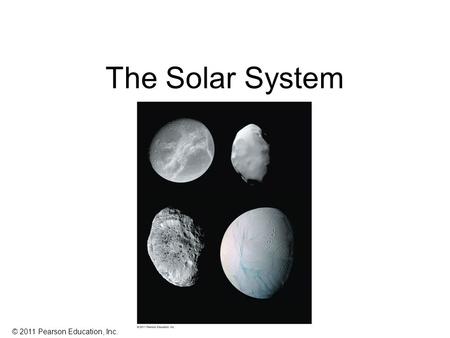 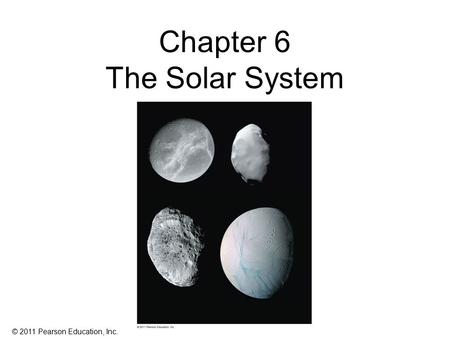