3 Generating Large Amounts of Energy
Using a generator: They transform kinetic energy into an electric current. Magnets inside a generator are rotated by a turbine, a machine that uses the flow of a fluid (water) to turn a shaft. The magnets spinning pulls electrons away from their atoms and creates a flowing current. Current is sent through transmission lines to cities.

6 The Million-Dollar Question
Where does the energy come from to spin the turbine?

8 Hydroelectricity Harnessing the power of flowing water.
Dam built to hold water ADVANTAGE: Inexpensive to produce electricity, Clean DISADVANTAGE: Environmental, expensive to build. 25 Hydro plants in Ontario Niagara Falls is the largest one and also has the least impact on the natural environment.

11 Biomass Organic material made up of plant and animal waste.
Two options: Burn the waste Collect the methane from decomposing organisms and then burn as a fuel. ADVANTAGE: Uses compost DISADVANTAGE: Still adds CO2 to the atmosphere Most waste comes from wood waste from lumber and from pulp and paper industries. Also from CORN. All 5 thermal generating stations will be come biomass stations by 2014.

12 Nuclear Atoms of uranium are split in a chain reaction. Produces an ENORMOUS amount of energy. 1kg of uranium = kg of coal ADVANTAGE: Lots of energy per $, No CO2 DISADVANTAGE: Waste must be stored for thousands of years. 2 nuclear power plants in Ontario (Pickering and Darlington… both near Lake Ontario)

14 Geothermal Water is heated by hot rock deep in the Earth’s crust. Rises to surface as hot water and steam. ADVANTAGE: Natural, no CO2 DISADVANTAGE: $ to dig and harness the energy. Sources for this are found in BC. They are in the testing stages for this.

15 Wind Turbines use the energy of moving air to spin their blades, which are connected to a generator. ADVANTAGE: No greenhouse gases. DISADVANTAGE: Wind isn’t constant, impact on animals? Wind in Ontario blows strong enough to turn a turbine ~20% of the time (needs to go at least 10km/h to generate electricity)

16 Tidal Uses the energy of the gravitational pull of the moon (when tides move in or out). ADVANTAGE: Natural, no CO2. DISADVANTAGE: Could harm wildlife, still very new. North America’s only tidal power generating station is in Annapolis Royal, Nova Scotia. Bay of Fundy is powerful enough to turn turbines. It provides electricity for 4500 homes. Tests are underway to expand this to BC and in other Nova Scotia areas.

17 Solar Solar Panel uses solar cells to convert the sun’s rays directly into electricity. ADVANTAGE: Works for smaller appliances and remote areas; clean energy. DISADVANTAGE: Costly and not very efficient per solar cell. Solar farms in Sarnia and Sault Ste. Marie are amongst the largest in the world. They provide enough energy for ~9000 homes.

18 Solar Thermal Mirrors focus sunlight onto a liquid that is heated and used to turn water into steam to drive the turbines. Solar farms in Sarnia and Sault Ste. Marie are amongst the largest in the world. They provide enough energy for ~9000 homes.

22 Future of Energy in Ontario
Our goal is to be SUSTAINABLE. All 5 Thermal stations will become Biomass stations by DONE!!! Wind energy is the fastest growing source of energy production. Continue to develop safe nuclear waste storage in Canada. 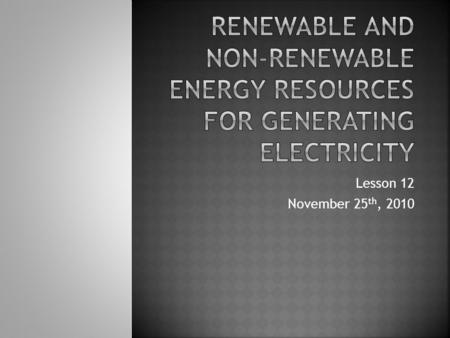 Lesson 12 November 25 th,  The electricity used in most homes in Ontario is usually generated quite some distance away at some large scale electricity. 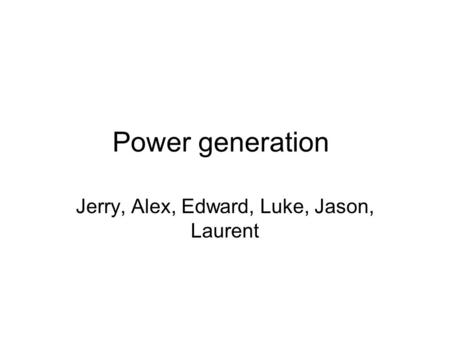