Chapter 18 – Water in the atmosphere Page 388 How would you describe the cloud in this photo? If you saw this cloud in the sky, what type of weather would.

Presentation on theme: "Chapter 18 – Water in the atmosphere Page 388 How would you describe the cloud in this photo? If you saw this cloud in the sky, what type of weather would."— Presentation transcript:

1 Chapter 18 – Water in the atmosphere Page 388 How would you describe the cloud in this photo? If you saw this cloud in the sky, what type of weather would you expect? How do clouds form? Why do clouds sometimes produce rain?

5 Humidity Specific humidity – the actual amount of water vapor in the air. 20 grams/kilograms of air is very humid Saturated air – rare of evaporation = the rate of Condensation Warmer air can hold more water vapor Relative humidity – How near the air is to maximum capacity. 0 – 100% Measuring Humidity – Psychrometer – wet and dry bulb tem. If they both read the same – no water is evaporating 100%

12 Cloud Formation If cloud temp is below -20C cloud is made mostly of ice and snow As warm air rises it cools. When it reaches a height where it hits the dew point, clouds form – Condensation Level Unsaturated air cools at a rate of 10C for every kilometer it rises – dry–adiabatic lapse rate Saturated air cools 5-9C/Km - moist-adiabatic lapse rate The cooling as air rises is due to the expansion of the air

13 Cumulonimbus Clouds - Heat from condensation keeps the air inside a cumulus cloud less dense that the surrounding air which makes it grow vertically Meteorologist can predict cloud height if they know: Temperature of the clouds, dew point and the rate at which the rising air cools. Layer clouds or stratiform form in stable hair Stable air: If the temp of rising air inside the cloud decrease more quickly than the temp outside the cloud

17 Measuring Precipitation Measured in a rain gauge by 1\100th of an inch Snow is measured by using a ruler or snow stick. 1 inch of rain is about 10 inches of snow

Download ppt "Chapter 18 – Water in the atmosphere Page 388 How would you describe the cloud in this photo? If you saw this cloud in the sky, what type of weather would." 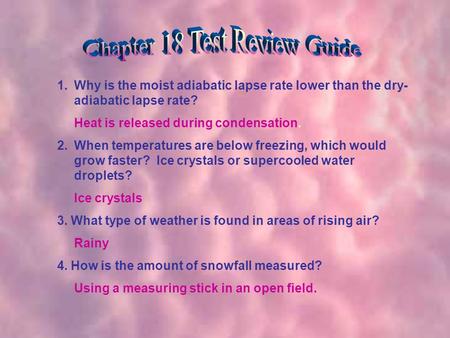 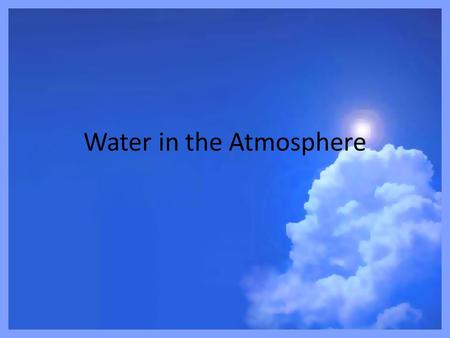 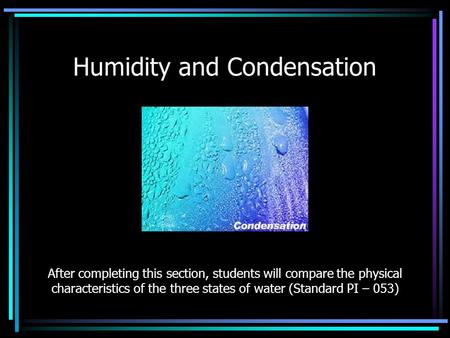 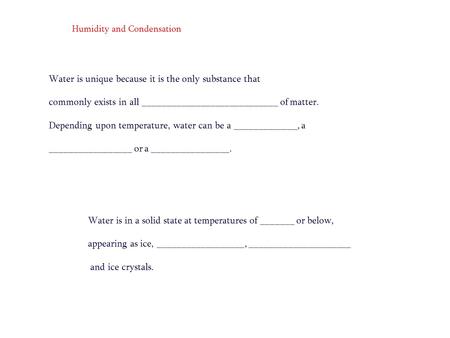