4 COMP3221 lec33-Cache-I.4 Saeid Nooshabadi Memory Hierarchy (#1/5) °Processor executes programs runs on order of nanoseconds to picoseconds needs to access code and data for programs: where are these? °Disk HUGE capacity (virtually limitless) VERY slow: runs on order of milliseconds so how do we account for this gap?

8 COMP3221 lec33-Cache-I.8 Saeid Nooshabadi Memory Hierarchy (#5/5) °If level is closer to Processor, it must be: smaller faster subset of all lower levels (contains most recently used data) contain at least all the data in all higher levels °Lowest Level (usually disk) contains all available data

10 COMP3221 lec33-Cache-I.10 Saeid Nooshabadi Memory Hierarchy Analogy: Library (#1/2) °You’re writing an assignment paper (Processor) at a table in the Library °Library is equivalent to disk essentially limitless capacity very slow to retrieve a book °Table is memory smaller capacity: means you must return book when table fills up easier and faster to find a book there once you’ve already retrieved it

11 COMP3221 lec33-Cache-I.11 Saeid Nooshabadi Memory Hierarchy Analogy: Library (#2/2) °Open books on table are on-chip memory/cache smaller capacity: can have very few open books fit on table; again, when table fills up, you must close a book much, much faster to retrieve data °Illusion created: whole library open on the tabletop Keep as many recently used books open on table as possible since likely to use again Also keep as many books on table as possible, since faster than going to library shelves

12 COMP3221 lec33-Cache-I.12 Saeid Nooshabadi Memory Hierarchy Basis °Disk contains everything. °When Processor needs something, bring it into to all higher levels of memory. °On-chip Memory/Cache contains copies of data in memory that are being used. °Memory contains copies of data on disk that are being used. °Entire idea is based on Temporal Locality: if we use it now, we’ll want to use it again soon (a Big Idea)

13 COMP3221 lec33-Cache-I.13 Saeid Nooshabadi On Chip SRAM Memory °Provides fast (zero wait state access to program and data) °It occupies a portion of address space. °Requires explicit management by the programmers. Part of the program has to copy itself from slow external memory (eg flash- rom), into the internal on-chip ram and start executing from there Works well for limited number of programs where, the program behaviour and space requirement is well defined.

15 COMP3221 lec33-Cache-I.15 Saeid Nooshabadi A Case for Cache °On-Chip SRAM requires explicit management by the programmer Possible for an embedded system with small number of well defined programs Not possible for a general purpose processor with many programs, where the application mix cannot be determined in advanced -Explicit memory management become difficult °We need a mechanism where the copying from the slow external RAM to Int. memory is automated by hardware (Cache!)

16 COMP3221 lec33-Cache-I.16 Saeid Nooshabadi Cache Design °How do we organize cache? °Where does each memory address map to? (Remember that cache is subset of memory, so multiple memory addresses map to the same cache location.) (Books from many shelves are on the same table) °How do we know which elements are in cache? °How do we quickly locate them?

17 COMP3221 lec33-Cache-I.17 Saeid Nooshabadi Direct-Mapped Cache (#1/2) °In a direct-mapped cache, each memory address is associated with one possible block within the cache Therefore, we only need to look in a single location in the cache for the data to see if it exists in the cache Block is the unit of transfer between cache and memory

22 COMP3221 lec33-Cache-I.22 Saeid Nooshabadi Issues with Direct-Mapped with Larger Blocks °Since multiple memory blocks map to same cache index, how do we tell which one is in there? °How do we select the bytes in the block? °Result: divide memory address into three fields tttttttttttttttttttttttttttttioo tagindex byte to checkto offset for select within correct blockblock block

24 COMP3221 lec33-Cache-I.24 Saeid Nooshabadi Direct-Mapped Cache Terminology °All fields are read as unsigned integers. °Index: specifies the cache index (which “row” or “line” of the cache we should look in) °Offset: once we’ve found correct block, specifies which byte within the block we want °Tag: the remaining bits after offset and index are determined; these are used to distinguish between all the memory addresses that map to the same location

28 COMP3221 lec33-Cache-I.28 Saeid Nooshabadi Things to Remember °We would like to have the capacity of disk at the speed of the processor: unfortunately this is not feasible. °So we create a memory hierarchy: each successively higher level contains “most used” data from next lower level exploits temporal locality °Locality of reference is a Big Idea 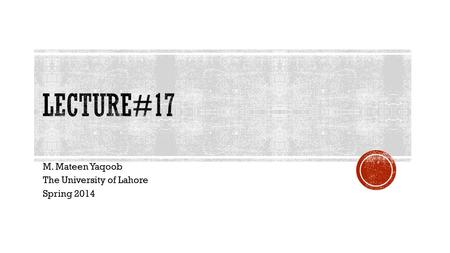 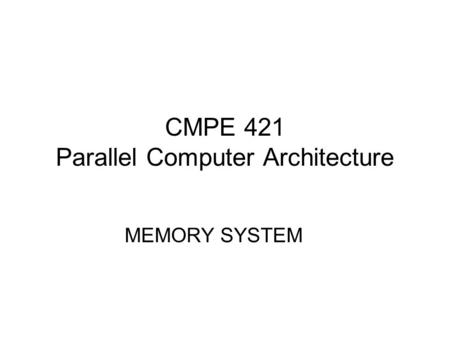 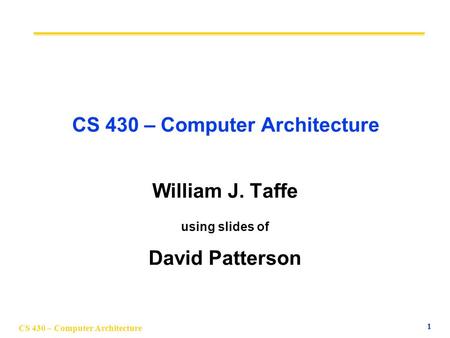 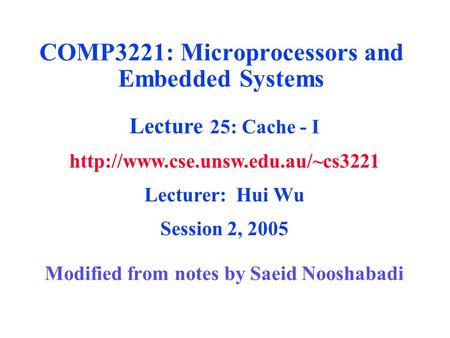 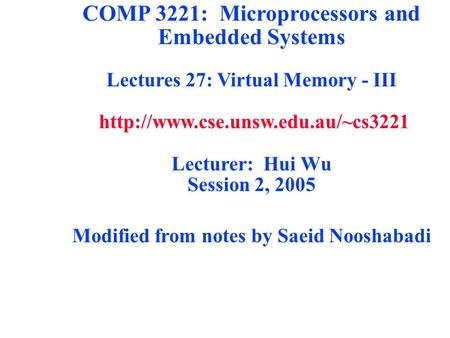 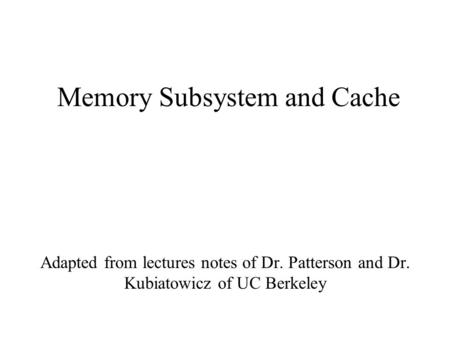 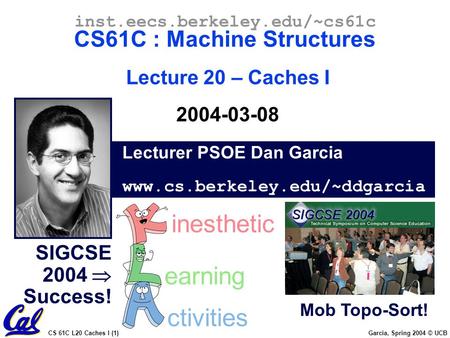 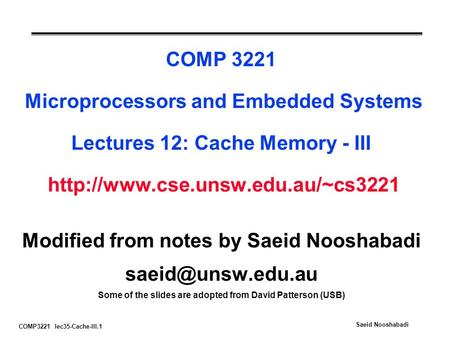 Modified from notes by Saeid Nooshabadi 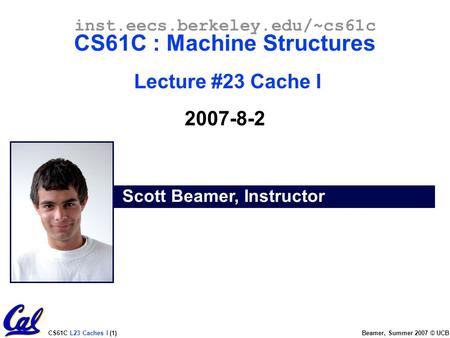 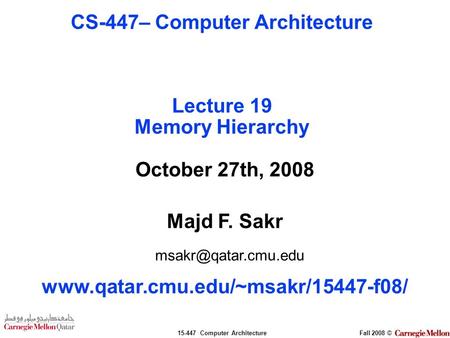 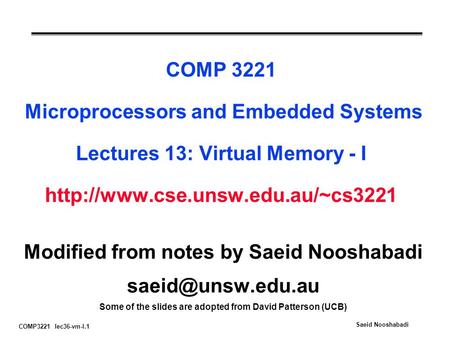 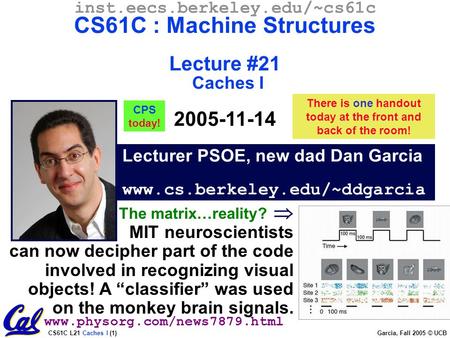 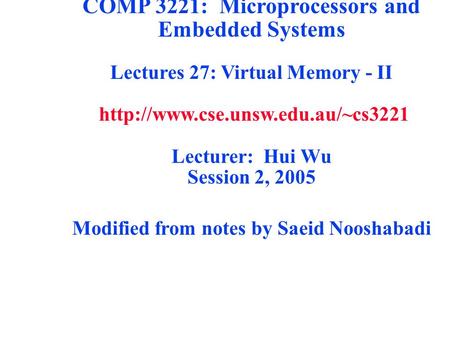 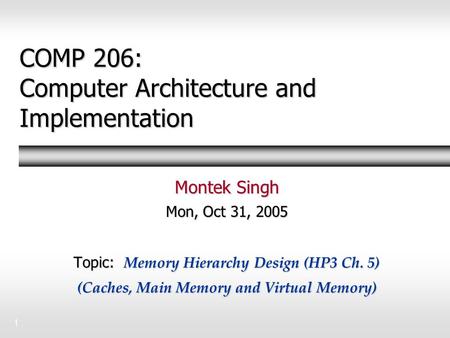 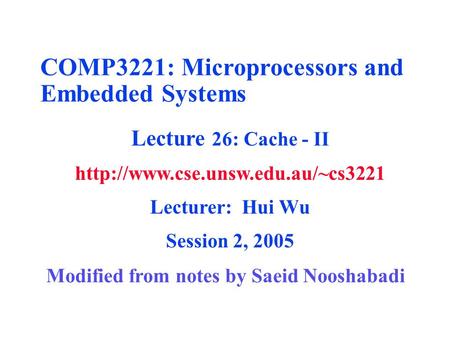 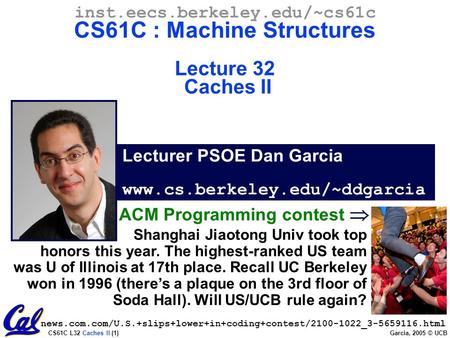 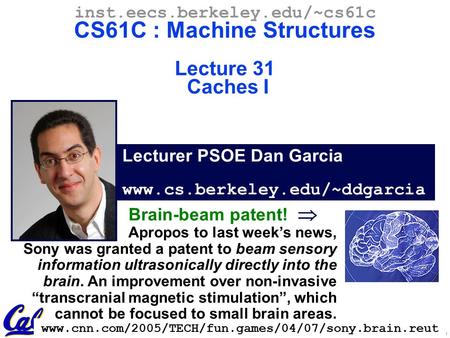 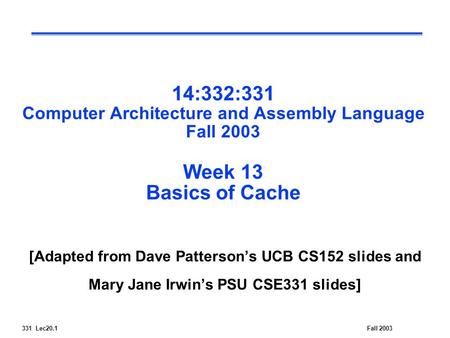 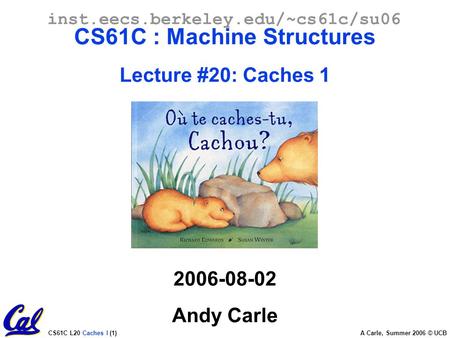 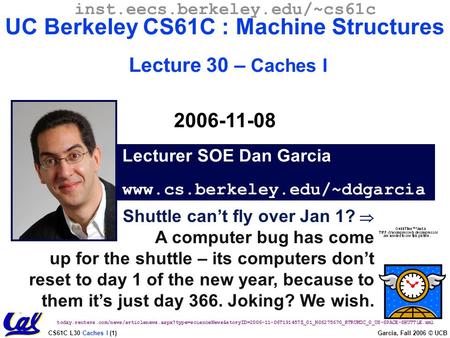