2 2.1 Introduction: What is Interannual and Decadal Variability?
Time series of SSTs in the East Pacific (region Nino3.4)

4 2.1 Introduction: What is Interannual and Decadal Variability?
The NAO index is defined as the anomalous difference between the polar low and the subtropical high during the winter season (December through March). The positive phase is associated with more storminess in the Atlantic storm track and the negative phase with reduced storminess.

6 2.1 Introduction: Can we predict SI Variability?

24 Walker Circulation British mathematician, director general of observations for India (formed after monsoon failure of worst famine in Indian history) Arrived in 1904, shortly after huge famine caused by drought Goal to predict Indian Monsoon Found that many global climate variations, including Monsoon rains in India, were correlated with the Southern Oscillation Fig. 9.

27 ENSO Bjerknes recognised that the “El Nino” warming of the ocean was related to variations in the SOI. During El Nino: SOI is low Trades are weak Precipitation is enhanced over central equatorial Pacific (indicated by low OLR)

29 Why is El Nino important?
Major climate and economic impacts on countries around the tropical Pacific, and further afield. Droughts in some regions, floods in others Collapse of coastal fishery in Peru (largest average annual catch of marine fish in the world)

41 3-D animation of the tropical Pacific as it cycles through El Nino then La Nina. The surface shown is sea level (cm) and the surface is colored according to the SST anomalies associated with each event.

42 Chronology of Events in the History of Understanding El Niño and La Niña
late 1800s Fishermen coin the name El Niño to refer to the periodic warm waters that appear off the coasts of Peru and Ecuador around Christmas. 1928 Gilbert Walker describes the Southern Oscillation, the seesaw pattern of atmospheric pressure readings on the eastern and western sides of the Pacific Ocean.

43 1957 Large El Niño occurs and is tracked by scientists participating in the International Geophysical Year. Results reveal that El Niño affects not just the coasts of Peru and Ecuador but the entire Pacific Ocean. 1969 Jacob Bjerknes, of the University of California, Los Angeles, publishes a seminal paper that links the Southern Oscillation to El Niño.

44 1975 Klaus Wyrtki, of the University of Hawaii, tracks sea levels across the Pacific and establishes that an eastward flow of warm surface waters from the western Pacific causes sea surface temperatures to rise in the eastern Pacific. 1976 Researchers use an idealized computer model of the ocean to demonstrate that winds over the far western equatorial Pacific can cause sea surface temperature changes off Peru.

45 1982 A severe El Niño develops in an unexpected manner, but its evolution is recorded in detail with newly developed ocean buoys. 1985 Several nations launch the Tropical Ocean-Global Atmosphere (TOGA) program, a 10-year study of tropical oceans and the global atmosphere. 1986 Researchers design the first coupled model of ocean and atmosphere that accurately predicts an El Niño event in 1986.

46 1988 Researchers explain how the "memory" of the ocean--the lag between a change in the winds and the response of the ocean--influences terminations of El Niño and the onset of La Niña. The array of instruments monitoring the Pacific, plus coupled ocean-atmosphere models, enable scientists to warn the public of an impending El Niño event. 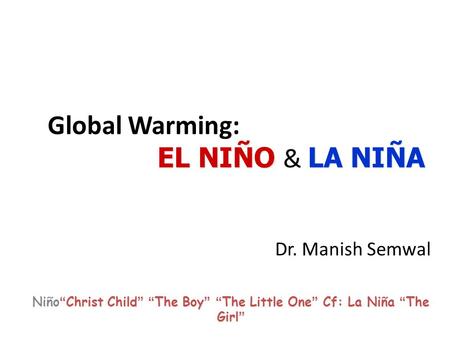 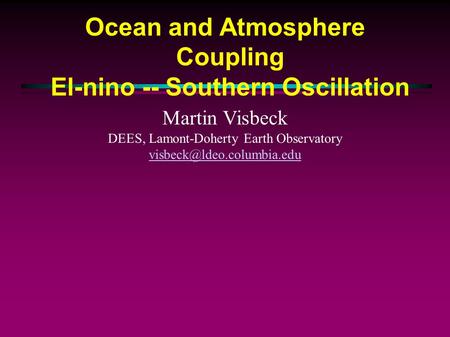 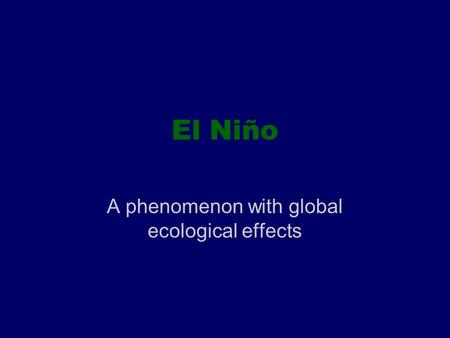 A phenomenon with global ecological effects 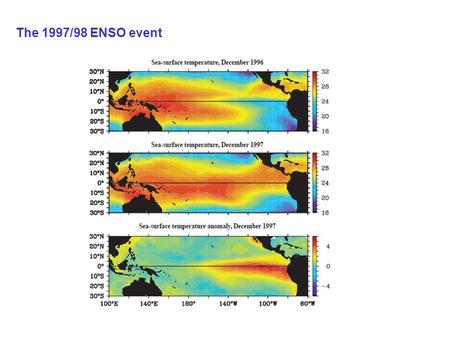 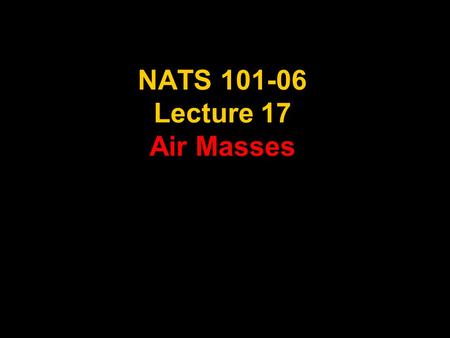 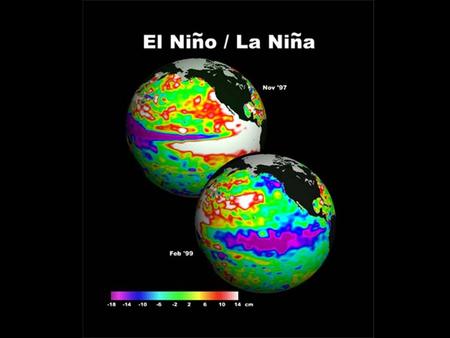 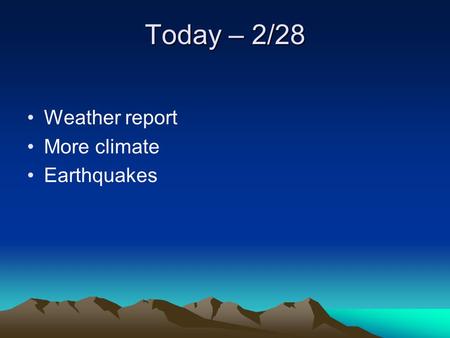