3 Radiative Energy Balance
The imbalance of the top of the atmosphere radiation implies that there must be an internal heat transport by the combined action of ocean and atmosphere of ~ W 30°N/S. Ocean Atmosphere Top of atmosphere

4 The Oceans Role in Climate
The annual heat flux between ocean and atmosphere is formed by the sum of all of the heat transfer process: Solar radiation Terrestial radiation Evaporation Heat conduction

7 Mean Tropical Pacific Ocean-Atmosphere Climatology
The Intertropical Convergence Zone (ITCZ) is where the trade winds from the Northern and Southern Hemispheres converge into a narrow belt close to the equator. A result of the general Hadley circulation which dominates the tropics and subtropics.

9 West to East SST gradient
These two processes cause the tropical Pacific to develop an E-W temperature asymmetry: Warm in the west and cold in the east.

10 Mean Tropical Pacific Ocean-Atmosphere Climatology
Deep atmospheric convection and heavy rainfall occurs in the western Pacific over the warm water, whereas there is net atmospheric subsidence over the colder water in the eastern Pacific

12 Mean Tropical Pacific Ocean-Atmosphere Climatology
Subtropical/tropical circulation in the Pacific could thus be considered as including two orthogonal, but coupled, components: (A) Hadley Cell transport crossing latitude lines (towards the equator at the surface and away from the equator in the upper troposphere); and (B) Walker Cell transport parallel to the equator (westward at the surface and eastward in the upper troposphere).

13 Mean Tropical Pacific Ocean-Atmosphere Climatology
The combined effect of the Hadley Cell, Walker Cell and rotating earth dynamics is to cause intense convergence and vertical circulation at the ITCZ (near 0° latitude), over both the land and the sea. Strength of the trade winds varies in phase with the strength of the Walker Cell circulation, and can experience large interannual variations. (ENSO)

15 The End Members of ENSO El Nino
Weaker trades relax pressure on surface ocean layer & it starts to move back across Pacific from west to east, raising SST in the eastern tropical water, including Peru (El Nino conditions), with the zone of heavy rains shifting out over the central Pacific islands

16 Mean Sea Level Pressure Index of ENSO
A widely used index of the strength of the Southern Oscillation, the Southern Oscillation Index (SOI) is given by the normalized difference, SLP at Tahiti - SLP at Darwin. Barometric records at those stations go back to the 1880's. Both Darwin & Tahiti have an appreciable seasonal cycle of Mean Sea Level Pressure ( ). Smallest contrast between the two locations occurs in the southern hemisphere autumn, while the highest gradient in MSLP is during the austral summer.

17 Mean Sea Level Pressure Index of ENSO
Higher positive values of SOI indicate stronger trade winds, especially in the southern hemisphere (La Nina conditions) For most of the time, mean sea level pressure (MSLP) is relatively high in the south central Pacific (e.g. Tahiti) and MSLP is relatively low over the Indian Ocean and N Australia (e.g. Darwin), with a net transport of air at low latitude from east to west -- the easterly trade winds

18 Mean Sea Level Pressure Index of ENSO
Every few years the MSLP difference between east and west weakens; consequently the trades relax and there is often drought in India and Australia. Monsoon rainfall correlations to SO were established by mid 1920s Between 1970 and 1990, there were about four La Nina episodes when high values of SOI persisted for many months, and an equal number of El Nino episodes

19 SST Index of ENSO Nino 3 There is a tight coupling between the SO and eastern equatorial SST -- that is, El Nino. A time series of Darwin SLP plotted in parallel with a widely used El Nino index called NINO3. (high correlation) NINO3 is the SST anomaly (departure from normal) averaged over the region 5°N to 5°S and 90°W to 150°W. Note, that the SOI and NINO3 index are out of phase (different signs).

20 ENSO Dynamics Why Does ENSO State Tend to Oscillate?
The short answer is "equatorial ocean dynamics"

21 ENSO Impacts How do we know what happens to the global climate during an ENSO event? Use time series from climate station and perform a correlation analysis. (How many years do we need?) Plot the result of on a global map and interpret the pattern.

26 The Physics of El Niño The interaction between an east-west sloping upper ocean layer and atmospheric trade winds gives rise to a quasi- periodic seesaw along the equator. The SST, atmospheric flow and equatorial convection are oscillating together (ENSO), affecting vast regions outside the tropical Pacific. The progress made in understanding of ENSO has led to a breakthrough in climate prediction. Source: NOAA/NCEP/CPC

27 Climate Impacts Discussion: What economic impacts does ENSO have?
What can we say about ENSO and global climate change? Are there other phenomena similar to ENSO? Can we predict ENSO?

28 Forecasting El Niño with Numerical Models: An Evolving Concept
Observations of meteorological & ocean conditions in the equatorial Pacific are analyzed and fed into a ... regional coupled model of the equatorial Pacific to forecast the evolution of local SST. SST data are fed into a ... global climate model to create a probabilistic forecast of the global climate impact. Source: NOAA/PEML Source: IRI 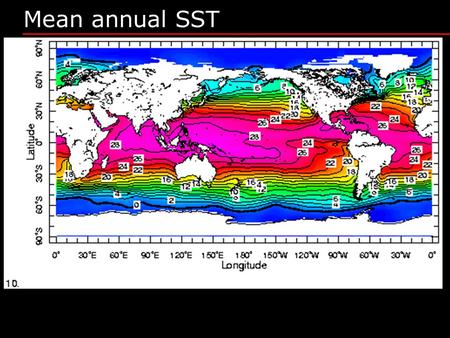