Presentation on theme: "The Rise of Christianity Ashley Harvey. The First Christians During the 900s B.C., Israel was divided into two kingdoms: Israel and Judah. The Kingdom."— Presentation transcript:

1 The Rise of Christianity Ashley Harvey

2 The First Christians During the 900s B.C., Israel was divided into two kingdoms: Israel and Judah. The Kingdom of Israel was destroyed and its people were scattered. But the Jews, the people of Judah survived. Emperor Augustus made Judah into a Roman province called Judaea in A.D. 6. The Zealots were Jews who rebelled against the Romans in A.D. 66 to take back their kingdom. The Zealots were defeated and the temple was destroyed. The Jews rebelled again in A.D. 132 and were defeated again. In retaliation, the Romans forced the Jews to leave Jerusalem and banned them from ever returning.

3 The First Christians The Jews believed God would send a messiah to restore the kingdom. A messiah is a deliverer. Jesus, a Jew born in the city of Nazareth, traveled throughout Judaea preaching his ideas. Jesus’ message was contained in a group of sayings called the Sermon on the Mount. There he taught love and forgiveness, not simply following religious laws to get to heaven

4 The First Christians Jesus used parables to give his messages. Parables are stories that use events from everyday life to express spiritual ideas. Jesus’ small band of 12 close followers were called disciples. Parable of Lost Son (Luke 15.11) Parable of Good Samaritan Luke 10.25)

5 The First Christians Jesus’ followers believed He was the messiah the Jews had been waiting for. Leaders in Jerusalem charged Jesus with treason and crucified him. EXPLAIN CRUCIFICATION He was preaching different messages from the ruling Jewish class. Jews thought that the savior was still coming and would be someone like a King or a powerful ruler, not someone from the lower class Also he was saying all you have to do is worship god and you will have everlasting life.

6 The First Christians After Jesus is crucified he was thought to have risen from the dead after 3 days. Jesus’ followers believe in Jesus’ resurrection, or rising from the dead and that it was proof that he was the messiah. These followers who accepted Jesus and His teachings became known as Christians. They met together in small groups, beginning a new religion called Christianity. The word Christ comes from Christos, the Greek word for “messiah.”

7 Christianity became popular and spread throughout the Roman Empire because it gave hope to the lower classes. Apostles, or early Christian leaders helped set up churches and spread the message of Jesus.

8 The Christian Church Christianity spread throughout Rome Also, Christianity gave people an opportunity to be part of a caring group of people. Roman officials began to feel threatened by Christians. The Romans began to persecute, or mistreat, the Christians, under Nero, in A.D. 64. Martyrs is what they started calling people willing to die rather than give up their beliefs. Roman officials began to realize that Christianity had become too strong to be destroyed by force. Then, in A.D. 312 a Roman emperor saw a flaming cross in the sky as he was about to go into battle with the words “In this sign you will conquer.” This emperor was Constantine

9 The Christian Church Constantine won the battle and was converted to Christianity. He stopped the persecution of Christians by ordering the Edict of Milan which gave religious freedom to people and made Christianity legal.

10 The Christian Church Constantine's successor, the emperor Theodosius, made Christianity Rome’s official religion in A.D. 392. Early Christians modeled their church after the Roman Empire’s government structure with a hierarchy. The pope was the bishop of Rome. Gradually the pope claimed power over other bishops. The Latin-speaking churches in the West that were led by the pope became the Roman Catholic Church

11 The Christian Church Doctrine is official church teaching. –Church leaders began to put together a written account of the life of Jesus because Jesus himself left NO written record. –The early writers were Matthew, Mark, Luke, and John. Their works were combined to form the New Testament of the Bible.

Download ppt "The Rise of Christianity Ashley Harvey. The First Christians During the 900s B.C., Israel was divided into two kingdoms: Israel and Judah. The Kingdom." 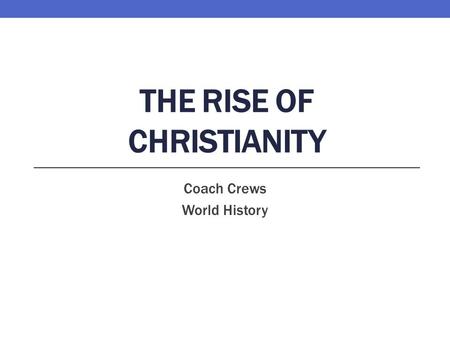 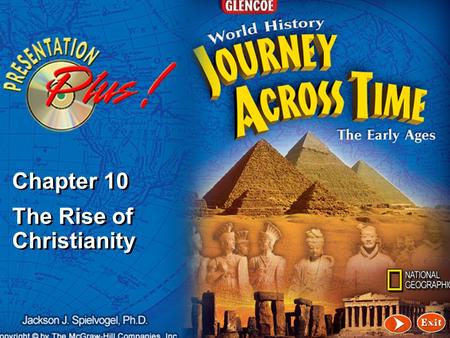