Fracture shaft of the femur While the powerful muscles surrounding the femur protect it from all but the powerful forces it cause sever displacement of.

2 Clinical Features: There is swelling, deformity of the limb & movement is painful, bleeding is sever, more than 1 liter may be lost in the soft tissue, one must exclude neurovascular injury & other lower limb or pelvic #. # of the femoral shaft & tibial shaft on the same side produce floating knee. X ray: Determine # pattern, one must x ray the hip & knee as well as base line chest x ray because of the risk of ARDS in those with multiple injuries. Treatment: * Emergency treatment: 1- treat the shock. 2- splint the #either by tying the limb to the other leg. Or by the use of Thomas splint, this will control pain, reduce bleeding & make transfer easier. * Definitive treatment: to reduce the systemic complications the # must be stabilized either by: (1)- Traction& bracing: Traction can reduce & hold most #s. in reasonable alignment except those in the upper 1/3 of the femur. The main indications for traction: 1- # in children. 2- contraindication to anesthesia. Lack of suitable skills & facilities for internal fixation. Relative contraindications to traction: 1- elderly patient. 2- pathological #. 3- multiple injuries. Types of traction: 1- for infant less than 12 KG. the lower limb suspended from un overhead pullies “ Gallows traction ” but no more 2 KG. used to avoid circulatory embarrassment. 2- for older children use Russell ’ s traction for 4 wk. then spica cast for 6-12 wk. 3- for adult or older adolescents use skeletal traction with 8-10 KG. for 8 wk. then pop cast for another 16-24 wk.

3 (2)- open reduction & plating: indicated in 1- combination of femoral shaft & neck #. 2- shaft # associated with vascular injury. (3)- intramedullary nailing : Is the method of choice for most femora shaft #, if locking screw used it will control even subtrocanteric & distal 1/3 # (4)- external fixation: indicated for: 1- sever open injury. 2- multiple injury. 3- deal with bone loss. Advantages: 1- not expose # site. 2- provide small amount of axial movement. 3- reduce operative time. 4- allow early movement & exercises. Reduce blood loss. Complications of femoral shaft #: Early: 1- shock: 1-2 liter of blood can be lost even in closed #. 2- fat embolism & ARDS: because # through large marrow filled cavity result in small shower of fat emboli being swept to the lung. 3- thromboembolism: prolong traction in bed predispose to thrombosis. 4- infection: risk occur in open injury & follow internal fixation & should be treated as for acute osteomyelitis. Late: 1- delayed & nonunion: when union delayed > 3-4 months & this should be treated by rigid fixation & bone graft. 2- malunion: no more than 15 degree angulation should be accepted & if shortening occur can be accommodated by building up the shoe.

4 3- joint stiffness: may be caused by soft tissue adhesion or the joint injured at the same time of initial trauma. 4- re# & implant failure. Supracondylar # of the femur Mechanism of injury: Seen in adult usually caused by high energy trauma & in elderly osteoporotic individual the usual cause is direct violence, the # line is just above the condyl but may extend between them & in worst case it is severely comminuted, if the lower fragment is intact it may be markedly displaced by the pull of the gastrocnemius thus risk injury the popliteal artery. Clinical feature: Swelling of the knee, deformity, painful movement, the tibial artery should be palpated. X ray : of the entire femur to exclude proximal or dislocation of the hip joint. Treatment: A)- if the # is undisplaced or reduced easily with knee flexion, the # treated by traction by pin through proximal tibia 4-6 wk. then replaced by cast-brace & patient allowed partial weight bearing. B)- operative: when closed reduction fail then open reduction & internal fixation done either with angled compression device or a retrograde locked intramedullary nail. Unprotected weight bearing not allowed until the # consolidated after 12 wk. Complications: Early: arterial damage. Late: 1- joint stiffness. 2- non union.

5 Femoral condyl # Mechanism of injury: Usually occur in association with supracondylar # or in isolation, the cause is direct trauma or fall from a height with the tibia driven upward into the intercondylar notch. Clinical feature: as for supracondylar #. X ray: show three type of # Type A: extra articular supracondylar #. Type B: intra articular unicodylar #. Type C: intra articular bicondylar #. Treatment: (1)- closed if the # not displaced by skeletal traction through the proximal tibia & manual compression of the # to improve the position. Traction is maintained for 4-6 wk. then changed to cast-brace until the # firmly united. (2)- operative: if closed reduction fail by OR&IF exercises begin early but weight bearing not permitted until the # consolidated. Fracture separation of distal femoral epiphysis Usually occur in children or adolescent, the lower femoral epiphysis may be displaced laterally by forced angulation of straight knee or forward by hyperextension injury.

6 The # separation is usually Salter-Harris type II & all type of # especially S-H type III & IV may result in femoral shortening as 70% of femoral length come from the distal physis. C/F: as with supracondylar #. Treatment: for S-H type I & II closed by manual manipulation & pop cast, if the # is instable, can be stabilized with percutaneous K wire. For S-H type III & IV should be accurately reduced & fixed & immobilized in plaster for 6-8 wk. Complications: Early: vascular injury Late: physeal arrest may result in angular deformity; treated by osteotomy. Or shortening treated by femoral lengthening.

Download ppt "Fracture shaft of the femur While the powerful muscles surrounding the femur protect it from all but the powerful forces it cause sever displacement of." 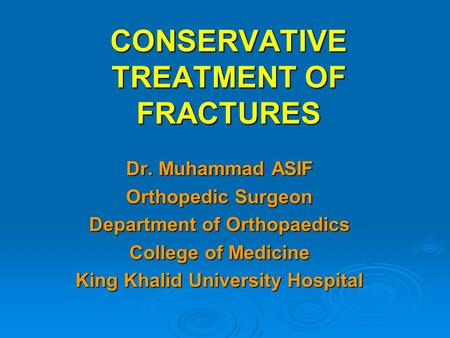 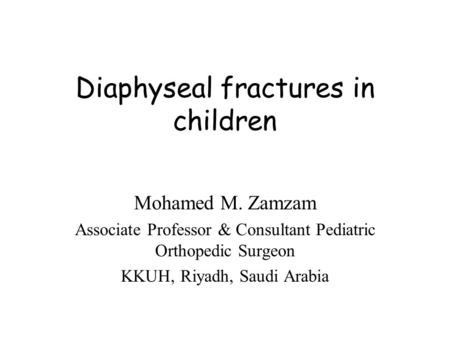 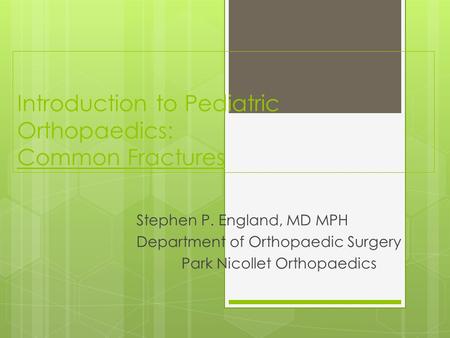 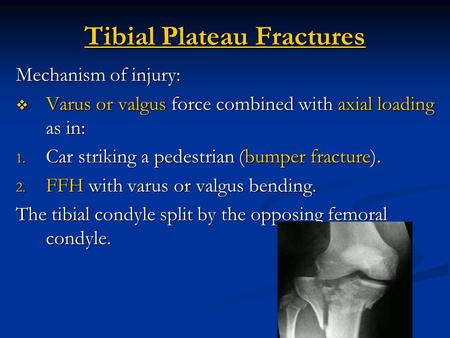 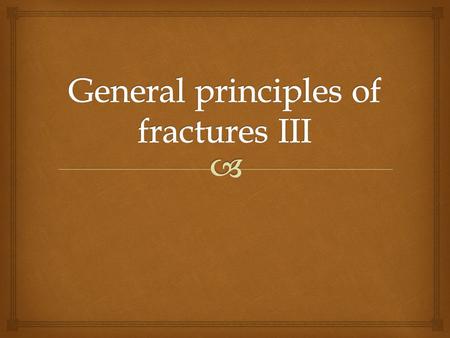 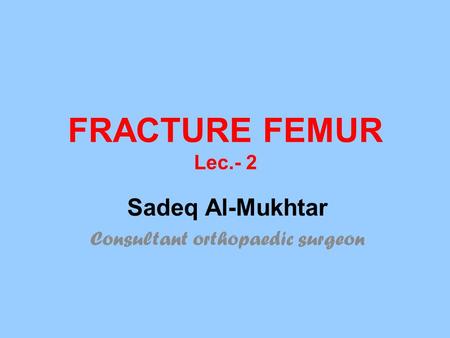 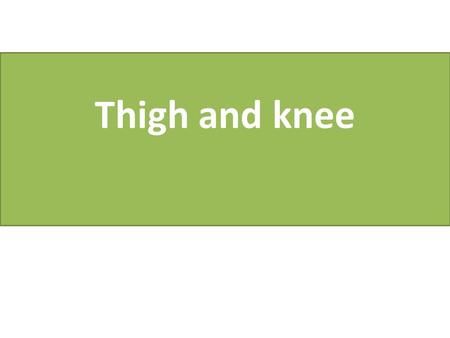 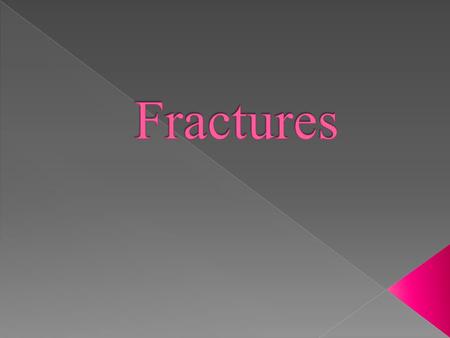  The animal will not be able to use the leg at all and if able will hold the leg up. Sometimes the foot will be rested on the ground when the animal. 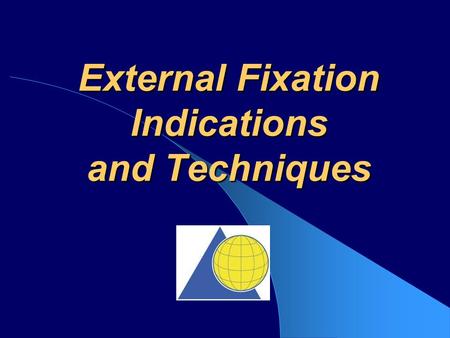 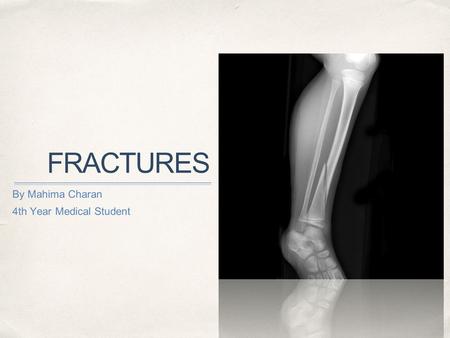 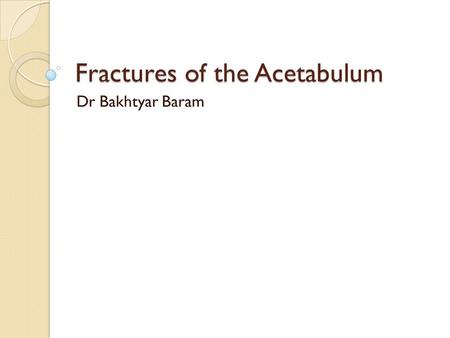 Fractures of the Acetabulum Dr Bakhtyar Baram. May be apart of alarger fracture in the pelvis or other regions like in the multitrauma pt.s. About 3/100. 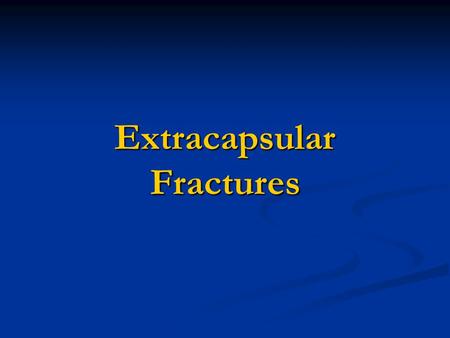 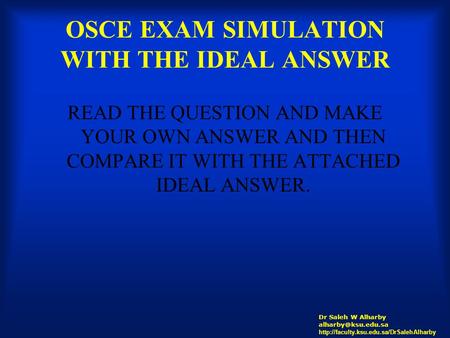 OSCE EXAM SIMULATION WITH THE IDEAL ANSWER READ THE QUESTION AND MAKE YOUR OWN ANSWER AND THEN COMPARE IT WITH THE ATTACHED IDEAL ANSWER. Dr Saleh W Alharby. 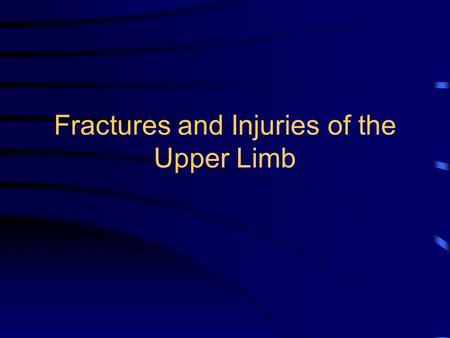 Fractures and Injuries of the Upper Limb 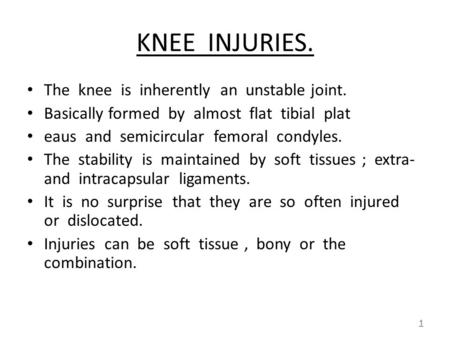 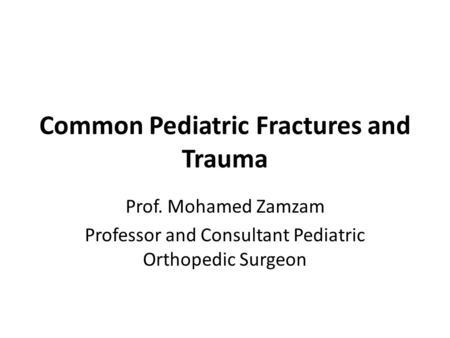 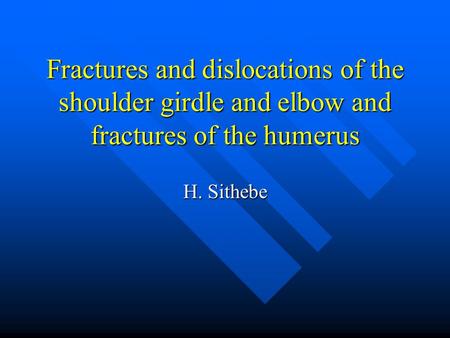 Fractures and dislocations of the shoulder girdle and elbow and fractures of the humerus H. Sithebe. 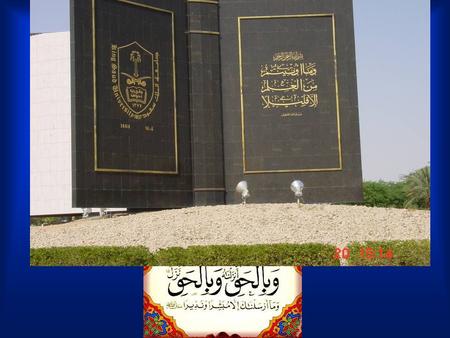 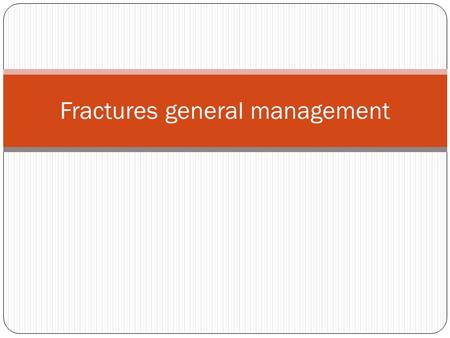 Fractures general management. A high velocity injury should always be treated according to the Advanced Trauma Life Support (ATLS) guidelines with attention. 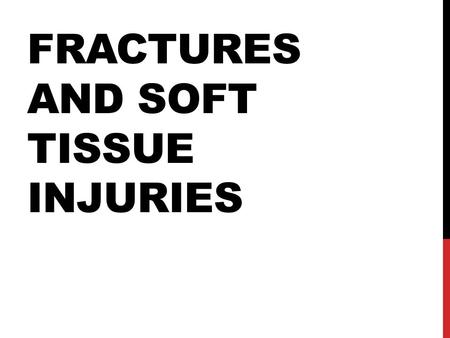 FRACTURES AND SOFT TISSUE INJURIES. FRACTURES A broken or cracked bone Great forces are required to break a bone, unless it is diseased or old Bones that.