2 The Hydrological Cycle
What you need to know: Be able to draw a diagram of the hydrological cycle. Describe its main elements. Explain how balance is maintained within the system.

8 Advection Wind energy may move clouds over land surfaces where …

11 Run off / Overland flow The rainwater flows, either over the ground (run off) into rivers and back to the ocean, or…

15 The water cycle balance
Usually the water cycle is in balance, and the amount of precipitation falling will slowly soak into the ground and eventually reach the rivers. However, if rain falls for a long period of time or if the ground is already soaked or saturated with water then the chance of flooding is increased.

17 A closed system The hydrological cycle is a good example of a closed system: the total amount of water is the same, with virtually no water added to or lost from the cycle. Water just moves from one storage type to another. Water evaporating from the oceans is balanced by water being returned through precipitation and surface run off.

18 Your Turn Write down the meaning of the following words: Infiltrate
Groundwater flow Surface runoff Evapotranspiration Closed system Use the New Higher Geography Textbook p.10 to help you. Then complete Activity 1 (a) – (c)

19 Human Inputs to the Cycle
Although this is a closed system there is a natural balance maintained between the exchange of water within the system Human activities have the potential to lead to changes in this balance which will have knock on impacts. For example as the earth warms due to global warming the rate of exchange in the cycle (between land and sea and atmosphere) is expected to increase.

20 Human Inputs Some aspects of the hydrologic cycle can be utilized by humans for a direct economic benefit Example: generation of electricity (hydroelectric power stations and reservoirs) These are effectively huge artificial lakes and this will disrupt river hydrology (amount of water in a river)

21 Other Human Activities
Paving, compacting soils, and altering the nature of the vegetation (including deforestation) The mining of ground water for use in agriculture and industry Large amounts of water vapour released into the atmosphere from industrial activity Large changes in vegetation by wildfire, logging, clearance for agriculture 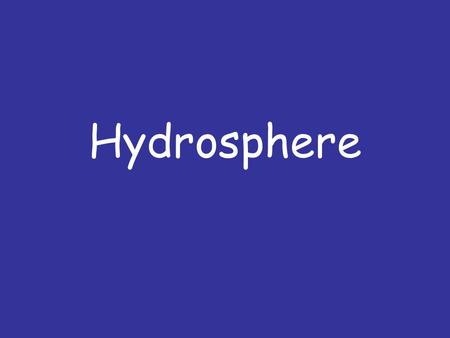 Hydrosphere. What will we look at in this unit? The Hydrological Cycle The River Course The Characteristics at each stage Hydrographs. 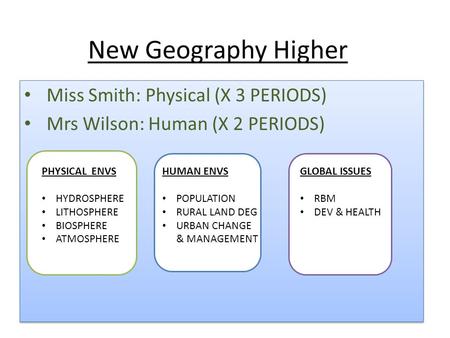 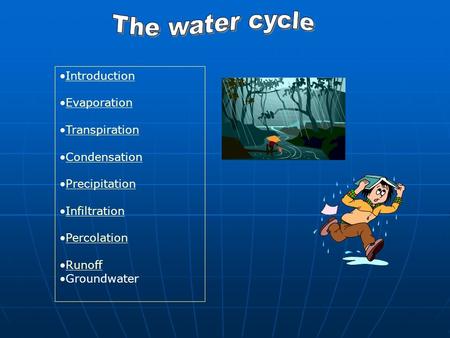 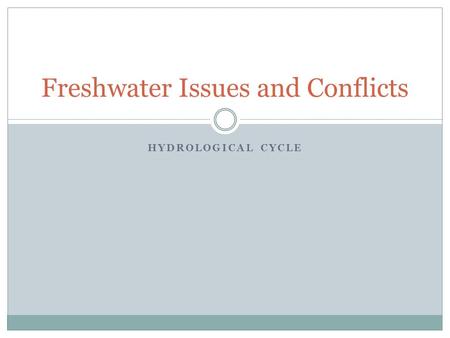 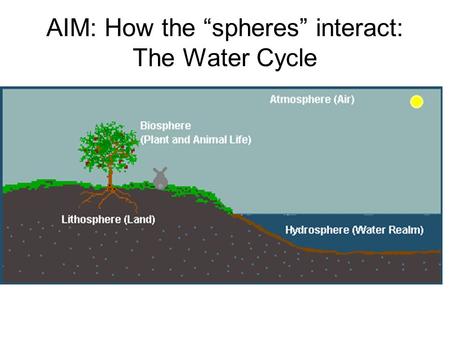 AIM: How the “spheres” interact: The Water Cycle 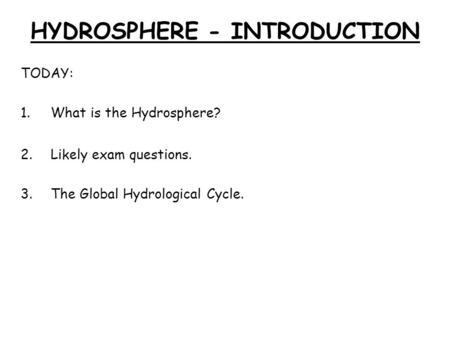 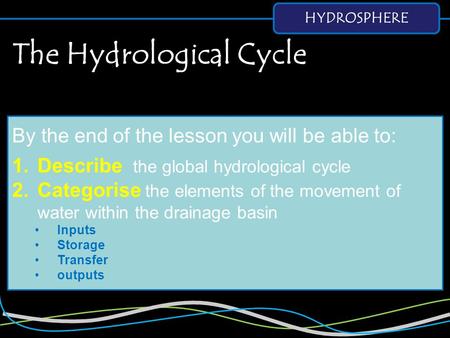 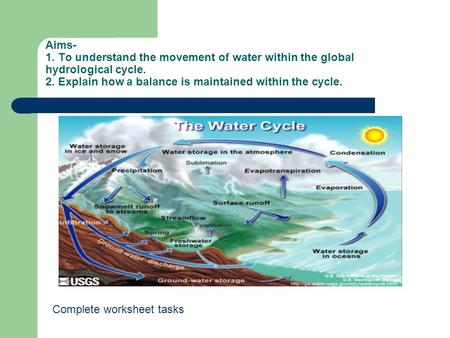 Aims- 1. To understand the movement of water within the global hydrological cycle. 2. Explain how a balance is maintained within the cycle. Complete worksheet.

The Water Cycle 01/20/ a pgs  IN: Where does our water come from and where does it go?