4 The Greenhouse Effect The earth is warming rather like the inside of a greenhouse. On a basic level the sun’s rays enter the earths atmosphere and are prevented from escaping by the greenhouse gases. This results in higher world temperatures. In more detail………

5 The Greenhouse Effect Energy from the sun drives the earth's weather and climate, and heats the earth's surface; in turn, the earth radiates energy back into space. Atmospheric greenhouse gases (water vapor, carbon dioxide, and other gases) trap some of the outgoing energy, retaining heat somewhat like the glass panels of a greenhouse. Without this natural "greenhouse effect," temperatures would be much lower than they are now, and life as known today would not be possible. Instead, thanks to greenhouse gases, the earth's average temperature is a more hospitable 60°F. However, problems may arise when the atmospheric concentration of greenhouse gases increases.

6 What are the greenhouse gases?
Since the beginning of the industrial revolution, atmospheric concentrations of carbon dioxide have increased nearly 30%, methane concentrations have more than doubled, and nitrous oxide concentrations have risen by about 15%. Why are greenhouse gas concentrations increasing? Nitrous Oxide is emitted from car exhausts, power stations and agricultural fertiliser (approx 6%). The major contributor is Carbon Dioxide (approx 64%). Methane is released from decaying organic matter, waste dumps, animal dung, swamps and peat bogs (approx 19%). CFC’s from aerosols, air conditioners, foam packaging and refrigerators most damaging (approx 6%). Burning of fossil fuels and other human activities are the primary reason for the increased concentration of carbon dioxide.

9 What are the consequences of Global Warming?
What are the pictures showing, what are the effects of global warming? 2 1 3 4

10 What are the consequences of Global Warming?
What are the pictures showing, what are the effects of global warming? 7 5 8 6

11 What are the consequences of Global Warming?

12 How did you do? Hurricanes –extreme weather Flooding of coastal areas
Desertification Ice caps melt

13 How did you do? Loss of wildlife habitats and species Sea level rise
Extreme storms Rise in temperatures

14 There are also some positive effects of global warming
Decrease in death and disease Healthier, faster growing forests due to excess CO2 Longer growing seasons Warmer temperatures (UK Mediterranean climate!!) Plants and shrubs will be able to grow further north and in present desert conditions Heavier rainfall in certain locations will give higher agricultural production (Rice in India, Wheat in Africa).

15 How can Global Warming be reduced?
Reduce the use of fossil fuels. A major impact would be to find alternatives to coal, oil and gas power stations. Afforest areas, trees use up the CO2, reduce deforestation. Reduce the reliance on the car (promote shared public transport). Try to use energy efficiently (turn off lights and not use as much!). Reduce, Reuse, Recycle. Careful long term planning to reduce the impact of global warming.

16 Task 3 : Reducing the impacts
On your Global Warming worksheet Write a paragraph to show how you would make a difference in reducing Global Warming.

17 Summary Global Warming is the increase in global temperatures due to the increased rate of the Greenhouse Effect. Greenhouse gases trap the incoming solar radiation, these gases include Carbon Dioxide, CFCs, Methane, Nitrous Oxides and other Halocarbons. These are released by human activity. We need the Greenhouse effect to maintain life on earth as we know it…however if we keep adding to the Greenhouse gases there will be many changes. Consequences can be negative ( ice caps melt, sea level rise, extreme weather conditions) or positive (more rain in drought areas, longer growing season). 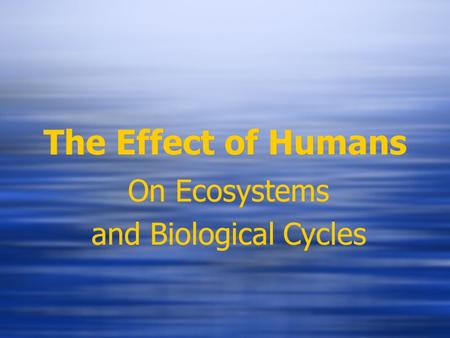