Presentation on theme: "Religious Stuff that caused a problem! What is an Icon? They appear in several forms; in mural painting, mosaic and most typically painted on small."— Presentation transcript:

2 Religious Stuff that caused a problem!

4 What is an Icon? They appear in several forms; in mural painting, mosaic and most typically painted on small wooded panels. Icons - sacred religious images representing saints, Christ, and the Virgin Mary, as well as narrative scenes such as Christ's Crucifixion. While today the term is most closely associated with wooden panel painting, in Byzantium icons could be crafted in all media, including marble, ivory, gemstone, precious metal, enamel, and mosaic.

5 What was the problem? Some Byzantine Christians opposed icons - they thought it was wrong to worship something that was man- made. Worship should only be made to God. These anti-icon Christians became known as “ICONOCLASTS” - meaning icon smashers Iconoclasts – those who opposed the use of icons and saw the practice as idolatry. Those in favor thought they helped the faithful honor the figures represented.

7 The Great Schism After decades of controversy the Byzantines finally accepted icons. In 1054 the Christian church split into 2 churches forever. In the West; the Roman Catholic (universal) Church. In the East; the Eastern Orthodox (correct belief) Church.

8 The West - Roman Catholic Church Mass was in Latin Pope was Supreme head of Church in the West - above any political ruler All clergy were celibate Religious icons of martyrs and saints to be respected Only Pope and Bishops could interpret the scriptures.

10 The East- Orthodox Church “Mass” was in Greek - so everyone could understand. Monks who did missionary work often converted it into the language of the people they were trying to convert Emperor was superior to Patriarch of Constantinople. Bishops couldn’t marry Other priest didn’t have to be celibate Icons caused much controversy - used but disapproved of.

11 Character of East Cosmopolitan - influenced by diverse ideas as eastern mysticism, Greek and Roman secular and pagan culture, and Monophysitism (doctine that holds Christ’s nature as divine not human) Greeks, Turks, Bulgars, Jews, Italians, Russians, Slavs, Khazars, Persians and Armenians all lived in Constantinople. Such diverse cultures contributed to the unique form of Christianity that developed in the East.

Download ppt "Religious Stuff that caused a problem! What is an Icon? They appear in several forms; in mural painting, mosaic and most typically painted on small." 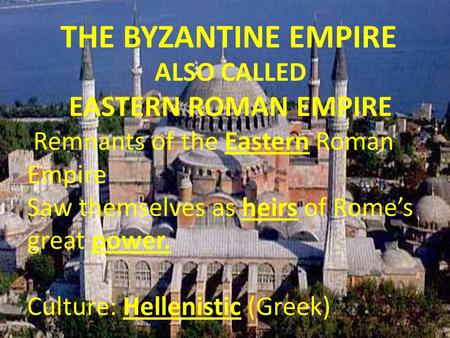